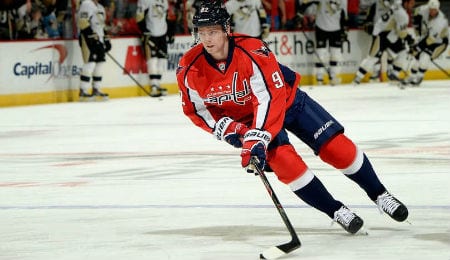 The 2014-15 RotoRob NHL Draft Kit speeds forward today with the release of one of our beloved Top 10 lists. So while you Pavel Datsyuk owners cry in your beer, let’s turn our attention to some younger players in the form of the Top 10 Rookies.

Ah, rookies. Like a box of chocolates, you never know what you’re going to get from these shiny new pennies. And, unless you’re involved in a serious keeper league, you’re most likely better off snatching them off the waiver wire than wasting a good draft pick. No matter how you decide to scoop up an intriguing youngster, or even if you’re just reading this for a laugh as your buddy selects his favourite team’s top young gun all too prematurely (take a breath after reading all that if you need to), regardless, we’ve got the Top 10 rookies to keep your eye on as the season gets underway.

1. Jonathan Drouin, LW, Tampa Bay Lightning: Nathan MacKinnon tore up the NHL last season, and the Quebec Major Junior League before that. If there’s anyone in the 2014-15 rookie class that can break out like the reigning Rookie of the Year, it’s his former Halifax Mooseheads linemate Drouin, who we slotted 14th in our Left Wing Rankings. After collecting 41 goals, 105 points and a plus-48 rating in 49 games in 2012-13 with MacKinnon, Drouin followed it up with 29 goals, 108 points and a plus-50 rating in 46 games without the 2013 first overall pick at his side. Oh yeah, Drouin then added 13 goals, 41 points and a plus-9 rating in 16 postseason games. But, you know, no big deal. We’re not advocating you take this guy in the draft, but odds are good someone in your league will. If he’s still on the board when you make your final pick, taking him could pay off big time.

2. Evgeny Kuznetsov, C, Washington Capitals: Considered by many to be the best young hockey player outside the NHL ever since being drafted 26th overall in 2010, Kuznetsov hasn’t done anything to prove those opinions wrong. The Russian is already a seasoned vet of men’s leagues, having played parts of five seasons in the KHL, collecting 65 goals and 146 points in 210 games. In addition, he’s been quite dominant against his own age group with Russia’s J18 and J20 squads. After years of speculation in the nation’s capital, Kuznetsov finally brought his talents to the NHL midway through last season, scoring three goals and nine points with and a minus-2 rating in 17 regular season games. You caught a glimpse of his ability right from the get-go, when he scored his first NHL goal (see video below). With a taste of the NHL game under his belt, and a full training camp, Kuznetsov will bring an interesting element to a Caps team looking to regain their dominant form of seasons past. Like Drouin, either draft him late or scoop him up in free agency.

3. John Gibson, G, Anaheim Ducks: Arguably the best young goalie prospect in the league or even the world, Fantasy owners have every reason to keep an eye on Gibson. Minus Jonas Hiller, the Ducks are leaving the crease open to every goaltender in camp, taking the approach “may the best goaltender win.” While Frederik Andersen stands a good chance of taking the net for his own, he’ll be given a very hard run for his money by Gibson. A dominant goalie nearly every time he’s worn the Red, White and Blue for his country, Gibson excelled in 45 games last season with the AHL’s Norfolk Admirals, collecting a .919 save percentage and a 2.34 goals against average before eventually being recalled by Anaheim. He then put together three wins, a 1.33 goals against average, a .954 save percentage and a shutout in three regular season games before emerging as a legitimate starter in four games during Anaheim’s two-round playoff run. Gibson isn’t on our list of Top 30 Goaltenders, but trust us — you’ll want to keep your eyes on this guy, he just might save your bacon.

4. Teuvo Teravainen, C, Chicago Blackhawks: When it comes to a team with incredible depth like Chicago, it’s hard for a rookie to crack the lineup. That’s exactly what Finnish rookie Teravainen is facing. He’ll start the season in the AHL, however, when he does finally reach the NHL, look out — he could be a serious contender for Rookie of the Year. A scorer, a playmaker and a dazzling dangler, size will never be Teravainen’s strength, but that’s small potatoes when compared to his sky high upside. After he averaged nearly a point-per-game player last season in 49 games with Jokerit of the Finnish SM-Liiga, there’s little more to be gained from playing overseas. Teravainen may or may not be a factor this season, nonetheless, keep your eyes on him.

5. Filip Forsberg, C, Nashville Predators: There’s a culture change in the Music City, and it’s due in no small part to the development of talented young players like Forsberg. Considered a potential first overall pick heading into the 2012 draft, the Swedish forward fell instead to the Capitals at 11th overall, before eventually being traded midway through the season to Nashville. A versatile winger, Forsberg plays a great two-way game, skates well and has all the offensive skills and instincts to be a high scorer in the NHL. With a change in coaching staff and the addition of some big ticket players, Forsberg could be set for a breakout season in Nashville.

6. Johnny Gaudreau, LW, Calgary Flames: You’ve heard of “Johnny Football.” Well, we’d like to introduce you to “Johnny Hockey.” At 5’8″ and 159 pounds, there’s nothing imposing about Gaudreau just from looking at him. Put him in a pair of skates and pass him the puck, however, and he’ll blow your socks off. Gaudreau isn’t just good — he’s silly good, and hasn’t posted a sub point-per-game season since EliteProspects.com started keeping track, and that’s including his play at the NHL level. In three seasons with Boston College, Gaudreau collected 78 goals, 175 points and a plus-81 rating in 119 games, including an outstanding 36 goals, 80 points and a plus-42 rating in 40 games last season as he captured the 2013-14 Hobey Baker Award as the NCAA’s top Collegiate player. That’s just the crowning jewel of a long list of achievements by the Flames’ 2011 fourth round selection. The big question now is whether or not Gaudreau’s level of play will translate to the NHL. To his credit, he did have one goal in his only NHL appearance last season. If developed carefully, Calgary could have a potential Martin St. Louis-type on its hands. After suffering through years of mediocrity, Lord knows those poor fans deserve it.

7. Jake Allen, G, St. Louis Blues: With the departures of veteran netminders Jaroslav Halak and Ryan Miller comes the chance for Allen to prove himself capable of being a roster mainstay beneath the Gateway Arch. Really, unless the Blues sign someone else, Allen will see considerable action in net. However, it’ll be up to him to prove himself worthy of a starting role, which could conceivably happen as soon as this season. Brian Elliott can’t get all the starts, so Allen might be worth taking a flyer on late in the draft. We suggest you keep an eye on this guy.

8. Kevin Hayes, RW, New York Rangers: A linemate of Gaudreau’s at Boston College the past three seasons, Hayes had a great campaign of his own in 2013-14, collecting 27 goals and 65 points with a plus-34 rating in 40 regular season games. He was also a finalist for the 2013-14 Hobey Baker Award, losing to Gaudreau in the end. Originally drafted 24th overall by Chicago in 2010, Hayes after college chose to sign with the Rangers rather than the Blackhawks, and who can blame him after looking at Chicago’s current lineup and prospect pool? No, his 6’5″ 225-pound moose-like frame will be much better suited for a rugged, two-way meat-grinder team like the Rangers. Watch this kid closely.

9. Calle Jarnkrok, C/RW, Nashville Predators: A second round pick of Detroit in 2010, Jarnkrok split the 2013-14 season between the Red Wings and Predators organizations after being traded to a Nashville squad in desperate need of a culture change. This season, they’ve got it, and they’ve also got a couple of young forwards who will be relied upon nearly as heavily as the big ticket additions to bring the Music City back into the playoffs. If last season is any indication, Jarnkrok could be ready for a big step in his hockey career after scoring two goals and nine points with a plus-7 rating in 12 games with the Preds towards the end of the season. With Coach Peter Laviolette now at the helm, this could be a very big season for the young Swede.

10. Christian Folin, D, Minnesota Wild: We never like to draft unproven rookie defensemen. There are typically too many categories they hardly register a blip in, while they adversely affect others, such as plus-minus rating. And, of all rookie defensemen available, why Folin? Because he’s nearly a lock as a top six defender in Minnesota, and he’s shown the ability to be a reliable two-way puck-moving defender with considerable offensive upside. Considered to be the top undrafted collegiate free agent available last season, Folin signed with the Wild after fielding offers from probably 29 other teams around the league. There’s a good reason why his services were so highly prized. In two seasons of NCAA puck with UMass-Lowell, Folin scored 12 goals and 41 points with a plus-27 rating in 79 regular season games before adding an assist and a plus-3 rating in over 19 minutes of action in his first and only game with Minnesota last season. He’s strong defensively, sure, but his heavy right-handed shot and 6’3″, 214-pound frame don’t hurt, either. Oh, speaking of that heavy shot, did we mention he can put a puck through the net? Big, sound defensively and a monstrous shot — sounds like a former D-partner Wild assistant captain Ryan Suter may remember from his days in Nashville. Don’t waste a draft pick, but definitely add this kid to your watch list.

Now it’s your turn. Let us know in the comments below which rookies you are targeting this season.

By Dakota Case
Tags: Pavel Datysuk
This entry was posted on Sunday, September 28th, 2014 at 10:23 pm and is filed under 2014-15 RotoRob NHL Draft Kit, Cheat sheets, Dakota Case, HOCKEY, Rookies. You can follow any responses to this entry through the RSS 2.0 feed. Both comments and pings are currently closed.