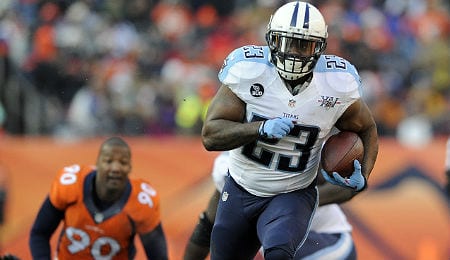 Shonn Greene could rack up plenty of TDs this season. (AP Photo/Chris Schneider)

The NFL Wire Troll is back for another season! Each week our team of handsome writers will give you premium advice on who to snag in your free agent pool. We won’t give you the obvious plays, we will give you the best value. As such, we present to you our Fantasy football waiver wire recommendations for Week Two.

Jake Locker, Tennessee Titans: It seems the Ken Whisenhunt genius has sunk into Locker already. While Locker didn’t torch the respectable Chief Defense for 400 or more yards he did play a swift and efficient game. We think had this game been closer we would seen more shots downfield from him. Oh, by the way, Locker gets to play the historically awful Dallas Cowboys in Week Two. Hopefully simply including him in the Wire Troll isn’t the kiss of death for him as it has been in the past.

Shonn Greene, Tennessee Titans: It’s real easy to get over zealous when a player scores a couple TDs. But, sometimes the average pace setter could be the next to emerge. Greene chunkified Kansas City to the tune of 4.7 yards per carry (71 total yards). With the Titans handling Bishop Sankey with kid gloves, Greene should be the TD/up the gut vulture as he was with the Jets a few years back (see video below). Savvy Fantasy owners will love Greene for the near future.

Chris Ivory, New York Jets: Are we crazy to think that Ivory will duplicate Marshawn Lynch’s numbers (110 yards and two TDs) at Green Bay? Okay, maybe that’s a stretch but nobody would be surprised to see him find the end zone. Besides a 71 TD-run Ivory did average three yards per carry up the middle versus Oakland on Sunday. After just one week it’s apparent that he will be the bruiser and Chris Johnson will be the off-tackle cruiser. Ivory should be considered in all standard formats as a flex starter until further notice.

James Starks, Green Bay Packers: It almost seemed inevitable as we saw Starks go undrafted in many formats, that he would appear here. Basically a career backup, he’s had flashes of excitement, but the fact is he can be a very productive player in PPR formats. Eddie Lacy (concussion) owners should have drafted Starks. However, many did not and if you have an open roster spot we say go for it.

Allen Hurns, Jacksonville Jaguars: Hey, is this the guy who tore apart the preseason with 232 yards receiving? Why yes it is, and thanks to a Cecil Shorts injury, Hurns started in Week One. Hurns responded with two receiving TDs of over 20 yards as part of a four reception, 110-yard day. While he is not a must-start yet — especially considering Shorts’s injury isn’t of the serious variety — we still see Hurns turning in games like this from time to time. Marqise Lee (six catches for 62 yards) also stands in Hurns’s way for snaps. Hurns probably did slip through some dynasty cracks and if that’s the case he should be tabbed ASAP.

Tampa Bay Buccaneers: You know who is mad as hell right now because they lost a home game to a backup QB to start the season? The Tampa Defense, that’s who! Now, they get to host St. Louis with quite possibly RotoRob himself at QB. It seems too good to be true, right? The Rams’ game plan should be simple. If Gerald McCoy doesn’t bust through the middle of the line, Lavonte David will destroy you on the edge. And, if for some reason you get the ball thrown, expect Alterraun Verner or Dashon Goldson to be somewhere around the pigskin when it lands. If you stream, this is your team for this week.

By Josh Johnson
Tags: Jake Locker
This entry was posted on Tuesday, September 9th, 2014 at 11:11 pm and is filed under FOOTBALL, Josh Johnson, The Wire Troll. You can follow any responses to this entry through the RSS 2.0 feed. Both comments and pings are currently closed.