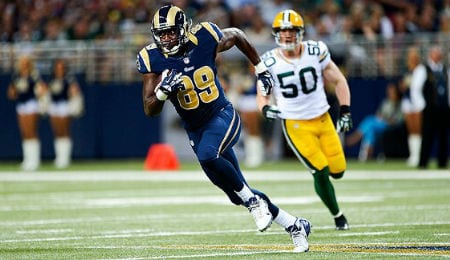 With big name injuries, suspensions and surprise teams seemingly around every corner, few of us if any came out unscathed in Week Two, but that’s what Tuesdays are for, to regroup, rejoice and reload. Let us get you started with this week’s Start ’em, Sit ’em picks.

Alshon Jeffery, WR, Chicago Bears @ NYJ: Jeffery, No. 8 on our Wide Receiver Rankings, has yet to live up to our billing. He’s a home run hitter which sometimes will make him really difficult to start, but not this weekend. The Jets secondary seems to have taken a tumble, and Jeffery will take advantage. Who knows? Maybe he’ll even duplicate his Madden NFL 15 exploits (see video below).

Cordarrelle Patterson, WR, Minnesota Vikings @ NO: In the same vein of Jeffery, Patterson is another talented player that will have you hovering over the start button. We suggest you press that button, as the disappointing New Orleans secondary will not be able to stop him, especially getting the ball out of the back field.

Bobby Rainey, RB, Tampa Bay Buccaneers @ ATL: Now, this ideally would be a flex option, but with Doug Martin on the mend and a soft Atlanta Falcons run defense that is even softer against runners catching out of the backfield, Rainey should be a solid start regardless.

Jared Cook, St. Louis Rams vs. DAL: After two straight consistent performances, Cook draws the Cowboys, who just gave up a mile to the less than athletic Delanie Walker. No matter who plays QB, Cook is ready to shine.

Toby Gerhart, RB, Jacksonville Jaguars vs. IND: We would tell you to trade Gerhart if we thought you could, but you can’t (unless you have a few suckers in your league) so just sit him down this weekend.

Larry Donnell, TE, New York Giants vs. HOU: Donnell has had two great starts so far this year, but with Eli Manning’s up and down play and a Houston Defense that’s downright abusive to tight ends, we say play it safe and sit him.

Brian Hoyer, QB, Cleveland Browns vs. BAL: Normally all bets are off during a rivalry game, but in this case we are willing to make an exception and say that the Ravens are gonna help Johnny Manziel get one step closer to that starting spot by laying the wood to Hoyer.

Lamar Miller, RB, Miami Dolphins vs. KC: Miller will definitely benefit from the loss of Knowshon Moreno in terms of touches, but he will also inherit the opposing defenses attention as well. So, for at least the first week of him being the guy again, we say hold off.

Now it’s your turn. Let us know in the comments below which players you’re starting or sitting in Week Three.

By Vaney Hariri
Tags: Alshon Jeffery
This entry was posted on Wednesday, September 17th, 2014 at 11:23 pm and is filed under FOOTBALL, Start 'em Sit 'em, Vaney Hariri. You can follow any responses to this entry through the RSS 2.0 feed. Both comments and pings are currently closed.