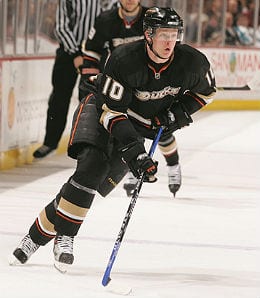 Corey Perry is a serious force for the Ducks. (Peoples.ru)

The 2014-15 RotoRob NHL Draft Kit surges forward today with another cheat sheet. So while Alex Ovechkin assures us his knee is sound, let’s take a closer look at the top 40 right wingers and see if he still rules the roost at this position.

So while you wonder at what position a lot of right wings will be listed, we took the liberty of placing them here from one to 40. With an unusually high amount of forwards these days, you get a lot of multiple position players, so check all your leagues as rules often vary. Centres are often a dime a dozen and it used to be right and left wings were almost an afterthought once the top 10 or 15 went off the boards. Now, that is not the case.

Last year saw the incumbent number one, Alex Ovechkin, fall back a bit. Maybe it was something in his personal life or whatever but 79 points is a hair below expectations. More likely it was the coaching scheme. Ovechkin was a -35 which really was as much poor luck as sub par defensive skills. Either way, there are lots of factors at play when ranking on the right side. Hell even a guy like Jaromir Jagr could crack the top 10 — assuming his linemates can keep up. Talk about a scary thought!

When you think about how these rankings shake out, don’t always get caught up in the number as much as upside. We are always on Twitter to take on any and all questions. This is a tough list, so let’s get started.

1. Alex Ovechkin, Washington Capitals (2 at LW): Ovechkin barely holds on to this spot because of the limited upside with a more defensive-minded coach (although Barry Trotz says he won’t try to change OV), and yes, some benefit of the doubt is the likely source of our faith. The power play points and goals (24) alone are well worth making him the top pick among RWs and almost LWs as well. Even strength will be the key test and a return back to the 85-to-90 point plateau is a reasonable expectation. Let’s just hope OV can stay out of trouble with the political statements.

2. Patrick Kane, Chicago Blackhawks (2): It is all about being maybe a bit different. Kane was a point a game player last season and the sting of losing in the Western Conference Final is likely to have a motivating factor. That is our reasoning in having Kane just a hair above Corey Perry in our rankings. No one said these decisions are easy. If the Blackhawks stays healthy, Kane could come close to 275 shots on goal which could mean a 35-to-40 goal campaign and 85+ points. If nothing else, he’s got the moves, baby (see video below).

3. Corey Perry, Anaheim Ducks (3): The big question now is how does Dany Heatley slow down Perry and Ryan Getzlaf, if any? Perry is just a force in the critical moments of games and that won’t change much no matter who is at left wing. The numbers could be tweaked down a tiny bit but the veteran is the prototypical power forward for a reason. If Perry’s PIMs spike a little, along with his power play goals, he could trump Ovechkin and Kane.

4. Phil Kessel, Toronto Maple Leafs (4): Are you getting a distinct feeling of status quo yet? Sorry if it seems like there is little change near the top but really there isn’t much. Kessel is the type of player that still has room for improvement. Some have even suggested playing without James vanRiemsdyk might be a good idea. It will be interesting to see how line combinations are tinkered with in season but Kessel could average four shots a game or more and that means a 40-goal season. It’s the same old Phil.

5. Marian Hossa, Chicago Blackhawks (6): Hossa is starting to get into that realm where you wonder if age is going to catch up to him. Just when you think it might, it doesn’t. The hunger in a player like him in his mid 30s is very good for Fantasy owners that will still probably get more value than his ADP. Hossa could approach the 70-point barrier.

6. Marian Gaborik, Los Angeles Kings (16): The Rangers probably regret trading Gaborik to the Blue Jackets who traded the right winger to Los Angeles. In the end, he scored 14 goals in the 2014 playoffs, was a Conn Smythe candidate, won the Stanley Cup, and gets to play with Anze Kopitar for a full season now. Life is good for Gaborik in Southern California.

7. Wayne Simmonds, Philadelphia Flyers (14): Simmonds may be the most consistent player on the Flyers roster… period! Note we did not say the best player, but he has a lot of qualities like a Corey Perry — he just has to develop a little more touch to his game. When Simmonds does, then look out. His upside is higher than most think and his PIMs and power play numbers even remind us of Perry which is a good sign.

8. Kyle Okposo, New York Islanders (NR): Okposo finally put it all together and even after the Olympic break was still producing before an injury shelved him at the tail end of the season. Playing a full season with John Tavares definitely pushes him past the 70-point mark. Okposo still does need to shoot more, especially on the man advantage, but his 2013-14 campaign was not a fluke at all. More people will realize that lesson in Fantasy hockey league this season.

9. Jaromir Jagr, New Jersey Devils (25): Jagr is far and away our boldest prediction of the rankings. There are many questions surrounding whether he can come close to 70 points again and we say, why not? Travis Zajac started to look like the player he was before the Achilles injury and Michael Cammalleri was brought in to give Jagr first line and top power play unit options. Even in his 40s, Jagr is not slowing down (just watch him after a game sometime).

10. Blake Wheeler, Winnipeg Jets (21): Wheeler is just a consistent 65-to-75 point player and that is not a bad thing. Winnipeg’s top six always seems to do well along with Dustin Byfuglien and a healthy Evander Kane. Wheeler mostly plays with Brian Little and Andrew Ladd, but on the power play and short handed, Wheeler really excels. True to his name, this is a dude that can really fly.

11. Jordan Eberle, Edmonton Oilers (8 at C): With Taylor Hall and Ryan Nugent-Hopkins, Eberle is too good to be held down for long and honestly this Oilers trio has to break out again at some point. If the Oilers ever figure out a second line and depth, that will make the first line that much more dangerous. Eberle should have a modest uptick in power play points while his total points will be similar to what he had last season.

12. Loui Eriksson, RW/LW, Boston Bruins (16 at LW): Eriksson has to stay healthy and many think he will. Why? Because he will be on the first line with David Krejci and Milan Lucic — Lucic will protect Eriksson well and create space while Krejci is able to dish him the puck. Boston had a formidable first line last year and Eriksson only makes it faster and younger. All it will take is a little chemistry which can be found during training camp.

13. Joe Pavelski, RW/C, San Jose Sharks (23 at C): After a monster season (nearly 40-40), expect Pavelski to come back down to Earth a bit as the Sharks’ shakeup has some effect. That 18.2 per cent shooting percentage is not sustainable and neither are the 16 PPGs, but do not be surprised if a 30-30 season is easily attained. Pavelski is a part of the younger core and may just be named captain which will add some pressure, no question.

14. Jakub Voracek, Philadelphia Flyers (9): There may be an interesting dynamic here as Voracek could play on the second line during even strength situations, but still see top unit power play time. The overall results should be about the same as the 62 points from last season, give or take. Just keep an eye early in the season on who Voracek plays with.

15. Martin St. Louis, New York Rangers (5): Does reality start to hit for the 39 year old? Last season was emotional beyond words with the passing of his mother and an inspired playoff run, but now what? That is the unknown. Early mock drafts have seen St. Louis taken all over the place. He may actually be carried by the younger talent around him for a change.

16. Jarome Iginla, Colorado Avalanche (26): So Iginla went from one pretty cozy situation in Boston to another one in Colorado. He will either play with Nathan MacKinnon or Matt Duchene which is great either way. The numbers again probably do not change very much from last season and Iginla will add a calming influence to a team that lost its way in the playoffs a bit.

17. Bobby Ryan, Ottawa Senators (7): The Senators did not see the best of Ryan with a variety of injuries but 2014-15 has to be better, right? He seemed to have some chemistry with Kyle Turris and they will need that as two-thirds of the new first line in Ottawa. Ryan could get back to around 30-to-35 goals.

18. Jeff Skinner, Carolina Hurricanes (23): Skinner might wind up leading the Hurricanes in points as there may be a few players that exit stage left. Alexander Semin and even Eric Staal might be shipped out. Then again, both may stay. Either way, little will matter. Change is coming in Carolina eventually but Skinner could score 30 goals.

19. Vladimir Tarasenko, St. Louis Blues (24): Tarasenko may just take that next step. It all depends on who he plays with in St. Louis. The ice time is going to go up regardless. Honestly, he may make more of an impact in the next few years than Paul Stastny. Tarasenko is just that kind of player with an upside no one has seen at all. This means draft him!

20. Radim Vrbata, Vancouver Canucks (27): The Czech star may just get to play with the Sedin twins and that means… points! It may not be the amount most are accustomed to but enough to get the Fantasy juices flowing. Daniel and Henrik Sedin will bounce back which means Vancouver’s scoring should — to a point. That makes Vrbata more attractive than he was last season.

Now it’s your turn. Let us know in the comments below what you think of our rankings. Did we miss anyone?

By Chris Wassel
Tags: Alex Ovechkin
This entry was posted on Monday, September 15th, 2014 at 10:51 pm and is filed under 2014-15 RotoRob NHL Draft Kit, Cheat sheets, Chris Wassel, HOCKEY. You can follow any responses to this entry through the RSS 2.0 feed. You can skip to the end and leave a response. Pinging is currently not allowed.