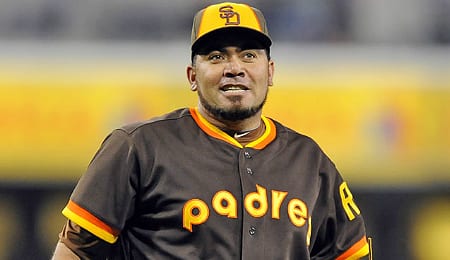 Huston Street’s departure jacks up the value of Joaquin Benoit — for now. (USATSI)

The second half is officially underway, which means rumours about who stays and who goes from teams’ rosters is now all the rage. No one expected the San Diego Padres to be anything but sellers at the trade deadline, so the deal sending Huston Street up the coast to Anaheim was no surprise. For Fantasy owners, this means Joaquin Benoit is the man to own, just as he was last year for Detroit. For now, at least.

Joaquin Benoit, RP, San Diego Padres (ESPN: 44 per cent owned, CBS: 29 per cent): With Street going up the road, Benoit will get the first (and we would think only) crack at closing games for the Padres, a possibility we alluded to prior to the season in our Relief Pitcher Rankings. That is, when they do have the lead, and if he himself sticks around (nothing stopping San Diego from flipping Benoit as well). It’s not as if he was performing too shabbily in a set-up role, fanning 46 batters in 39 2/3 innings while posting a 2.04 ERA and — as you can see in the video below — Benoit knows how to get out of a tight jam.

Chris Carter, DH, Houston Astros: (ESPN: 31 per cent owned, CBS: 39 per cent): With this Chris Carter, it’s: “All he does: hit home runs.” (With apologies to Chris Berman.) But the Astros’ slugger is on a serious dinger binge in July with six already, giving him 19 for the year, and has seen his average skyrocket (yes, that is the proper term here) to the Mendoza Line after it was a moribund .181 when the month began. Carter has 10 RBI this month.

Omar Infante, 2B, Kansas City Royals (ESPN: 44 per cent owned, CBS: 47 per cent): It’s been baby steps for Infante, but we don’t get it, this is a likable guy from a Fantasy standpoint and otherwise. Infante is on an absolute tear this month, torching opposing pitchers at a .455 clip (20-for-44) with five RBI and — wait for it — an OPS of 1055. And how does seven multi-hit efforts in the last 10 games sound?

Nick Swisher, 1B, Cleveland Indians (ESPN: 23 per cent owned, CBS: 34 per cent): No, we can hardly believe it either, but Swisher has hit in 12 of his 15 July games at a .300 clip (15-for-50) with three homers and 14 RBI, so even if he needs to do that for, say, another 79 months to truly live up to his contract, he may be doing enough to find a spot on your Fantasy team. After a prolonged stretch of misery, Swish has been nothing but net for the Tribe lately with an 847 July OPS, making his .212/8/40 season numbers a little more bearable.

Chris Coghlan, LF, Chicago Cubs (ESPN: 29 per cent owned, CBS: 19 per cent): The former NL Rookie of the Year is no longer a spring chicken, but it seems he’s found some of his old magic, hence a 22 percentage point spike in ownership last week in the ESPN universe. Coghlan’s white-hot July (21-for-50, .420) with three homers and 12 RBI and a 1252 OPS should get your attention.

Zach McAllister, SP, Cleveland Indians (ESPN: 1 per cent owned, CBS: 11 per cent): The return of the Z-Mac was an impressive one, believe it or not. The 26-year-old may be worth a look after his one earned run, 5 1/3 IP performance at Detroit on Saturday.

Alejandro De Aza, LF, Chicago White Sox (ESPN: 22 per cent owned, CBS: 22 per cent): De Aza’s ownership is down from when we had him in our May 4 Wire Troll, but his steady play lately (.317 July average) makes him worth another look.

Tyler Flowers, C, Chicago White Sox (ESPN: 2 per cent owned, CBS: 13 per cent): Flowers runs into some power every now and again, but he is actually 6-for-9 in his last three games to bump his average up to .229 for the year. He also has 29 RBI.

Jarrod Dyson, CF, Kansas City Royals (ESPN: 2 per cent owned, CBS: 8 per cent): Dyson is quite underowned for a player with 18 stolen bases and a .294 average. Don’t expect any power numbers whatsoever, but he can help your Fantasy team’s speed numbers.

By Michael Seff
This entry was posted on Sunday, July 20th, 2014 at 1:38 pm and is filed under BASEBALL, Michael Seff, The Wire Troll. You can follow any responses to this entry through the RSS 2.0 feed. You can skip to the end and leave a response. Pinging is currently not allowed.