Was This Steve Clevenger’s Last Chance? 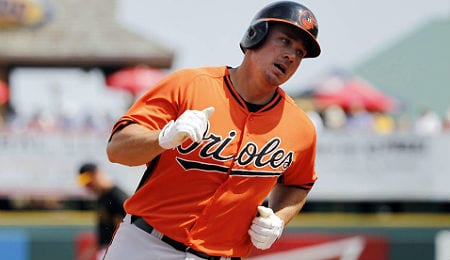 Last winter it seemed highly likely that Steve Clevenger would be the Orioles’ backup catcher this season.

We liked the idea, believing that having a good-hitting backup catcher might allow the O’s to keep Matt Wieters fresh with more rest.

Well, things didn’t quite work out as planned.

Wieters was on his way to the offensive breakout we’ve been waiting on forever, but his elbow started barking in early May and a month later he underwent season-ending Tommy John surgery.

Not necessarily. Two things happened to put the kybosh on Clevenger’s potential coming-out party. First, Caleb Joseph was recalled and a couple of weeks later, the O’s acquired Nick Hundley, a backspot perfectly capable of handling the starter job.

Joseph was brought up merely to provide depth but about six weeks later, he started hitting. And he continued to do just enough with the stick to surge to the top of the depth chart, leaving Clevenger as the third stringer — despite Wieters’ injury.

With Hundley on board, Clevenger was on borrowed time. Even with a decent .246 BA and the ability to take a pie in the face (see video below), he was excess baggage.

At the end of May, B-More shipped Clevenger back to Triple-A. He was back up for a week and a half in July, a few days in August and then earned himself a September call-up earlier this week.

Clevenger, who only has three MLB at-bats since his May demotion, has actually shown better extra-base power this year (his first career triple helped), but he hasn’t gone yard since 2012 and has typical catcher (nonexistent) speed.

At this point, he’s simply an extra bat that can come in handy at various times of the season, but it’s not clear he’s done enough to put himself in position for a backup gig in the majors. Clevenger was productive at Triple-A, but overall in the minors he wasn’t nearly as impressive as he was in 2013, when the Cubs’ seventh rounder from 2006 was still somewhat of a prospect.

For our money, that shipped has likely sailed. And it’s highly unlikely Clevenger will see enough PT this month to get on anyone’s radar. The fact that he’s all the Orioles have left from the Jake Arrieta trade probably doesn’t help ingratiate himself to the B-More faithful, either.

Crave more in-depth Fantasy analysis? Then join us every Thursday at 9 p.m. EST for RotoRob Fantasy Baseball Weekly Podcast on Blogtalkradio as we entertain and edify you for an hour or more each week. RotoRob’s guest next week will be Peter Kreutzer of AskRotoman.com. Tune in here.

By RotoRob
This entry was posted on Friday, September 5th, 2014 at 1:19 pm and is filed under BASEBALL, Player profile, RotoRob, Scouting Report. You can follow any responses to this entry through the RSS 2.0 feed. You can leave a response, or trackback from your own site.