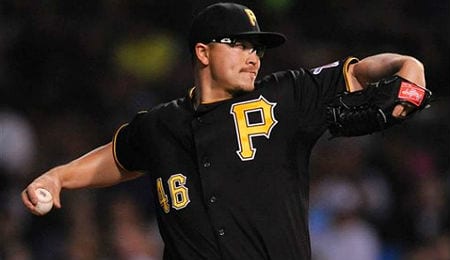 We’re into August now, so we’re getting down to the nitty gritty both in the real world and the Fantasy world. But that doesn’t mean it’s too late to grab some solid leftovers if you need a quick fix. This week, Vance Worley is all the rage. A look now this week’s Wire Troll recommendations.

Vance Worley, SP, Pittsburgh Pirates (ESPN: 18 per cent owned, CBS: 38 per cent): It’s now time to hop on the Worley bandwagon. He was on thin ice in Minny last year, but is now shouldering more responsibility for a Pirates team in the hunt in the NL Central. VW has allowed one earned run or fewer in each of his last three starts, including his first career shutout — a four hitter — last week at San Francisco (see video below). For the season, he is now 4-1 with a 2.43 ERA and 1.10 WHIP through 55 2/3 IP.

J.P. Arencibia, C, Texas Rangers (ESPN: 6 per cent owned, CBS: 16 per cent): Arencibia nearly atoned for his entire atrocious season with one historic game on Tuesday against the Yankees, going deep twice while driving in a career-high seven runs. In 13 July games, the once-beleaguered backstop posted a 917 OPS. More importantly, he’s playing now, having started eight straight games at first base, where he may soon gain eligibility for 2015.

Tommy Medica, 1B, San Diego Padres (ESPN: 4 per cent owned, CBS: 10 per cent): The age-old question: If a Padre has a historic offensive performance, and no one saw it, did it really happen? Did it make a sound? For any Fantasy owners who may have had Medica active on Friday, it should have. He went 5-for-5 with four runs, four RBIs and two homers in a 10-1 win over Atlanta, the second time in three days the Friars scored in double-digits. (Parallel universe?) Medica also went 4-for-5 against Atlanta on June 25 and since then is hitting .480.

Everth Cabrera, SS, San Diego Padres (ESPN: 33 per cent owned, CBS: 43 per cent): …But wait, there’s more activity in America’s Finest City as Medica isn’t the only Padre heating up lately. Cabrera also tallied four hits in the most recent rout over the Braves and is 6-for-21 (.286) since his return from injury. He also has 16 stolen bases on the season. In Padre-land, that’s the equivalent of Babe Ruth-type stats.

Juan Francisco, 3B, Toronto Blue Jays (ESPN: 22 per cent owned, CBS: 33 per cent): Francisco has driven in seven runs since June 24 and has 16 dingers on the year to go along with an 823 OPS. Okay, so the slow footed Francisco hasn’t stolen a base since 2012 and has already hit in four DPs this year, but you’ve got to love that slugging percentage (.515).

Grady Sizemore, LF, Philadelphia Phillies (ESPN: 8 per cent owned, CBS: 17 per cent): Let’s give Sizemore some love in the City of Brotherly Love. He’s 13-for-35 (.371) since July 25 with a homer and four RBI, and had seven hits in the first three games of the series against Washington this weekend.

Scott Feldman, SP, Houston Astros (ESPN: 3 per cent owned, CBS: 16 per cent): Sunday’s complete-game win over the Blue Jays was the second straight stellar start for Feldman. He has given up just two earned runs over his last 16 innings, making it much easier to overlook his 5-8 record and 4.13 ERA.

Mike Aviles, 3B/2B/OF, Cleveland Indians (ESPN: 5 per cent owned, CBS: 13 per cent): Aviles is a career underachiever, but don’t count him out of your Fantasy plans entirely. He endured a rough Sunday (0-for-6), but knocked in three runs in Friday’s win over Texas, and he has 28 RBI and 10 stolen bases for the season — plus is eligible at three positions, which can be very helpful.

Kennys Vargas, 1B, Minnesota Twins (ESPN: 0.2 per cent owned, CBS: 6 per cent): Vargas is starting to make a name for himself in Minneapolis after an outstanding weekend series against the ChiSox. He went 5-for-14 (.357) with four RBI and will get plenty of looks now that Kendrys Morales has been dealt to Seattle.

By Michael Seff
This entry was posted on Sunday, August 3rd, 2014 at 7:38 pm and is filed under BASEBALL, Michael Seff, The Wire Troll. You can follow any responses to this entry through the RSS 2.0 feed. You can leave a response, or trackback from your own site.