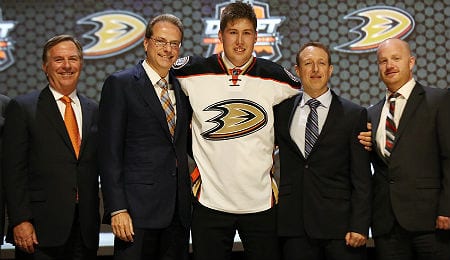 The Central Division had a fantastic draft this past June, welcoming a number of players sure to be household names in their respective fan bases for many years to come. But how well did the seven teams of the Western Conference’s Pacific Division make out? Let’s find out…

The Ducks mean business in Anaheim, and they showed it by making a move for one of the league’s best second line centres in Ryan Kesler from Vancouver on the first day of the 2014 draft. Shipping a couple of players, and 2014 first and third round picks, Anaheim still managed to keep the 10th overall pick from the Bobby Ryan trade, scooping up Peterborough Petes (OHL) assistant captain Nick Ritchie. A big, versatile winger at 6’2″ and 227 pounds, Ritchie has the size, skill and strength that makes him ideally suited as a legitimate NHL power forward. In 61 regular season games with the Petes, Ritchie had 39 goals, 74 points, 136 penalty minutes and a plus-4 rating, adding five goals and 10 points in 11 postseason games.

In the second round, the Ducks added a pair of defensemen, taking Skelleftea’s (Sweden – Jr.) Marcus Pettersson and the Waterloo Black Hawks (USHL) Brandon Montour with the 38th and 55th overall picks, respectively. A talented string-bean (6’4″, 159 pounds) Pettersson is very mobile, strong positionally and has a solid offensive upside after scoring four goals and 18 points with a plus-4 rating in 38 games with Skelleftea J20 last season. As a 19-year-old USHL rookie (he turned 20 during the season), Montour was dynamic, scoring 14 goals and 62 points with a plus-35 rating in 60 games with Waterloo, adding six goals, 16 points and a plus-8 rating in 12 postseason games as he swept the league awards as Player of the Year, Defenseman of the Year, Most Assists/Points by a Defenseman and collected First Team All-Star honours. He’ll be one to watch when he takes to the ice this fall with UMass (Amherst). Just keep Montour away from the glass (see video below).

Without picks in the third or fourth rounds, Anaheim took another defenseman in round five in Ashwaubenon’s (High-WI) Matthew Berkovitz. Considered to be a smart two-way player, Berkovitz had 11 goals and 37 points in 24 regular season games. He’ll make the leap to the USHL with the Chicago Steel next season before joining the University of Wisconsin in the fall of 2015.

The Ducks wrapped up their draft with seventh round pick Ondrej Kase, a versatile winger playing for Chomutov (Czech). He dominated Czech J20s with five goals, 15 points and a plus-14 rating in seven games before making the leap to the adult ranks with four goals, seven points and a minus-4 rating in 37 games. The 5’11”, 158-pound forward also represented his country in the 2014 U-20 WJHC, scoring a goal and three points with a minus-3 rating in five games.

Anaheim may have only had five picks, but the club made them count, particularly its first three. Ritchie has the makings of a classic top-six power forward, and Pettersson and Montour have the potential to become impact players on the Honda Center blueline. Those three alone make this draft class worth at least an A-.

With a lack of balance and bottom-six grinders and role players, the Coyotes went on a forward shopping spree with seven of their nine 2014 draft picks. Headlining the show was Niagara IceDogs (OHL) left winger Brendan Perlini, who Arizona snatched up with the 12th overall pick. Born in Guildford, Great Britain, Perlini is a very speedy puck-hog with slick mitts and a high hockey IQ. The 6’3″, 205-pound forward exploded for 34 goals, 71 points and a minus-2 rating in 58 regular season games in his sophomore campaign. He’ll be expected to produce similar numbers this fall.

In the second round, the Coyotes collected another pair of OHL forwards, taking centre Ryan MacInnis (Kitchener Rangers) and left winger Christian Dvorak (London Knights) with the 43rd and 58th overall picks. A forward who inherited the heavy shot of his legendary father, Al MacInnis, Ryan also brings ideal size with a 6’3″, 183-pound frame. He’s a project with average skating and he struggles for accuracy, but Ryan MacInnis certainly has potential. In 66 games as a rookie with the IceDogs, he had 16 goals and 37 points. Dvorak is also looking for a better sophomore campaign after collecting six goals, 14 points and a plus-8 rating in 33 regular season games in 2013-14.

Arizona added a versatile winger from the Swedish juniors in Frolunda’s Anton Karlsson with the 87th overall pick. A fast forward that can play either scorer or grinder, Karlsson had 12 goals, 22 points and a plus-3 rating in 28 regular season games with Frolunda’s J20 team. He’ll suit up for Skelleftea of Sweden’s SuperElit this fall. The Coyotes once again looked to the OHL in round four, taking Sault Ste. Marie Greyhounds left winger Michael Bunting, who managed to score 15 goals and 42 points with a plus-10 rating in 48 games as a rookie. He added five goals and six points in nine postseason games.

In the fifth and sixth rounds, Arizona finally decided to look to its defense, taking Edmonton Oil Kings’ (WHL) Dysin Mayo and Brynas’ (Sweden-JR) David Westlund with the 133rd and 163rd overall picks, respectively. Mayo is a very good two-way puck-moving defender who notched seven goals, 35 points and a plus-17 rating in 63 games in his second WHL season. He added three goals, 15 points and a plus-12 rating in 21 postseason games as he helped Edmonton to the league title and then to the CHL title as Memorial Cup champs. Westlund is a big defender at 6’3″ and 207 pounds, and had five goals, 10 points and a plus-9 rating in 33 regular season games with Brynas’ J20 club.

Finally, the ‘Yotes wrapped up the weekend with a pair of left wingers in the seventh round, selecting Cornell University (NCAA) incoming freshman Jared Fiegl and Oil Kings winger Edgars Kulda, an intriguing Latvian who scored at nearly a point-per-game pace with 30 goals, 60 points and a plus-30 rating in 66 regular season games. Kulda added 10 goals, 22 points and a plus-14 rating in 21 playoff games. He’ll be one to watch this fall.

Arizona needed forward depth going into this draft. We think it succeeded. And we also think it’s worth an A.

The Flames haven’t tasted a lick of playoff hockey since the 2008-09 season when they finished second in the Northwest Division with 98 points and Jerome Iginla had 35 goals and 89 points in 82 games, but it wasn’t enough as they fell in six games to the Chicago Blackhawks in the 2009 Western Conference Quarterfinals. Alberta residents — Edmonton Oilers fans aside — are hoping the selection of Kingston Frontenacs (OHL) forward Sam Bennett will help Calgary make the leap back into a playoff berth.

A versatile 6’0″, 179-pound forward, Bennett dominated the OHL in his sophomore campaign, scoring 36 goals and 91 points with a plus-34 rating in 57 regular season games with Kingston. He added five goals and nine points in seven playoff games. Bennett may not be able to do a single pull up, but that’s okay — not many in his draft class score so easily as he makes it look. Projected as a legitimate candidate for the first overall pick in 2014 heading into the draft, Bennett won’t dazzle like Nathan MacKinnon before him or Connor McDavid after, but he gets the job done with skill, speed and vision.

Calgary had a pair of picks in the second round, adding Charlottetown Islanders (QMJHL) goaltender Mason McDonald and Oshawa Generals right winger Hunter Smith with the 34th and 54th overall picks, respectively. McDonald is a big, athletic goaltender at 6’4″ and 179 pounds with excellent reflexes and puck-stopping ability. He dominated the 2014 U-18 WJHC tournament for Canada, posting a 1.94 goals against average and a .930 save percentage. That may have been what saved his draft stock as he struggled mightily in the offensive-minded Quebec league. He’ll look for a bounce-back season in 2014-15.

Smith is an interesting factor in his size alone. At 6’6″ and 207 pounds, the monstrous 18-year old had a solid showing in his third year of OHL play, notching 16 goals, 40 points, 100 penalty minutes and a plus-11 rating in 64 regular season games. He was even better in the postseason, collecting three goals, 11 points and a plus-2 rating in 12 games. Give him one more season of major junior puck and he could be a wild card for a roster spot with the big club as soon as the 2015-16 season.

In round number three, Calgary took its first defenseman of the weekend in Spruce Grove Saints’ (AJHL) Brandon Hickey. A Boston University commit, Hickey had four goals and 22 points in 49 games with the Saints. The 6’1″ 176-pound lefty added five points in 13 postseason games. The Flames added another blueliner with its next pick three rounds later in Djurgarden’s (Sweden-JR) Adam Ollas Mattsson. Another big skater at 6’4″ and 209 pounds, he uses his size to his advantage, playing a simple, effective game. In 33 regular season games with Djurgarden’s J20 club, Mattsson had a goal, nine points and a plus-2 rating. He’ll play a more prominent role this fall, and will likely spend a good amount of type with Djurgarden’s big club.

This was actually a very solid draft for the Flames, who added size, skill, grit and depth at all positions. Still, six picks aren’t enough to address every need. We’ll give them a B+ nonetheless.

Stay tuned, the Edmonton Oilers, Los Angeles Kings, San Jose Sharks and Vancouver Canucks are up next as we wrap up our 2014 NHL Entry Draft Grade Series.

Now it’s your turn. Let us know in the comments below how you think your favourite Pacific Division team in the draft.

This year, Carolina added to its defensive depth and acquired a top notch young back-stopper, but didn’t do much to address the forward corps as just one of the three selected forwards was a winger.

The 2014 NHL Entry Draft is over and with the league well into the offseason and free agency, it’s time to see how they did. Today, we’ll kick it off with part one of the Atlantic Division.