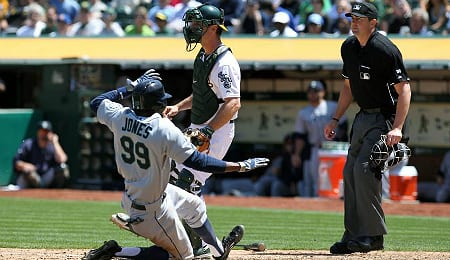 While you ponder whether the Yankees have truly upgraded their rotation with the acquisition of Brandon McCarthy, let’s get to this week’s waiver wire recommendations, courtesy of your trusty editor this week with Tim out of town at a family event.

Stephen Drew, SS, Boston Red Sox (ESPN: 1.7 per cent; CBS: 12 per cent): Okay, so we may have been a bit hasty in recommending Drew at the beginning of June when he was about to be recalled. He’s really struggled with his timing, sinking to as low as .122 last week. However, signs of a resurgence have arrived as Saturday Drew became the first Red Sox player to homer in both games of a double header since Jacoby Ellsbury turned the trick in 2011. No translation was required to see how hard he crushed his first dinger of the year (see video below). Seeing some extra base pop from Drew was a great sign, prompting us to give him another nod — at least in AL-only leagues.

James Jones, OF, Seattle Mariners (ESPN: 31.5 per cent; CBS: 29 per cent): Jones has had a rough weekend against the Pale Hose so far, but he came in red hot, batting nearly .310 in the last week. The rookie hasn’t received much ink so far, but it’s hard not to be impressed with the numbers he has quietly amassed in Em City. Jones is averaging over a hit per contest through 59 games and 215 at-bats, and while we’d like to see his walk rate closer to what it was in Triple-A, he’s managed to slightly reduce his strikeout rate since being promoted. The key to his game, though, is speed, and with a success rate like he has (17-of-18), any increase in his walk rate is going to translate into value.

Logan Forsythe, 2B, Tampa Bay Rays (ESPN: 4.7 per cent; CBS: 9 per cent): Heading into the season, we slotted Forsythe 45th in our Second Base Rankings, and until recently he’s done little to justify that. However, the veteran has gotten better and better each month and since June, he’s played so well that he is likely slightly ahead of our projections. With six multi-hit games in seven tries, Forsythe has forced his way into a daily spot in a lineup that’s been desperate for a spark. His solo homer Saturday broke up Anibal Sanchez’s no-hit bit, and the way this infielder is raking right now, you’ve got to roll with him in AL-only leagues until he cools. The only downside here is that Forsythe usually flirts with double-digits steals in a part-time role, but through 169 at-bats this year, he has yet to swipe a bag. But maybe that just means he’s due.

Nolan Reimold, OF, Toronto Blue Jays: The Jays just claimed Reimold off waivers from B-More, and with Edwin Encarnacion likely headed to the DL, there could be an opportunity for Reimold to make an immediate impact. We slotted Reimold 132nd in our Outfield Rankings heading into the season, but he has yet to appear in a big league game this year in the wake of a second neck operation. The O’s tried to sneak him through waivers, but the Jays pounced, and who knows? They’ve struck lightning with this kind of player before, so Reimold could be worth a flier in AL-only leagues. There’s great potential here; the only question is, can he stay healthy?

Justin Ruggiano, OF, Chicago Cubs (ESPN: 1.2 per cent; CBS: 5 per cent): Heading into the season, we slotted Ruggiano 126th in our Outfield Rankings, and so far he’s slightly exceeded that, playing at close to top 110 level. On Thursday and Friday, he recorded three hits and a homer on each day (with seven RBI total), and had another two singles Saturday. Ruggiano’s hot play is guaranteeing him playing time, making him worth exploring in NL-only leagues. Ankle and hammy woes have limited him to just 45 games this year, but now that’s healthy, the vet is rolling.

Stephen Vogt, C, Oakland A’s (ESPN: 6.4 per cent; CBS: 12 per cent): The fact that Vogt may qualify at OF as well in your league only makes him more intriguing, and with Josh Reddick on the DL again and Brandon Moss also hurting, he’s taking advantage with a six-game hit streak. Clearly, Vogt does not belong at Triple-A based on his .364 BA and 19 RBI in 21 games. And judging by his .349/.375/.470 slash line in the bigs, the former Ray farmhand is making a play to stay. Consider Vogt in AL-only and two-catcher formats.

Wade Miley, SP, Arizona Diamondbacks (ESPN: 10.9 per cent; CBS: 44 per cent): The wins haven’t been coming, but not for lack of effort. As we go to print, he’s in line to earn the win against the Braves Sunday after looking extremely strong for 6 2/3 IP in a third straight start without yielding a long ball as he looks to put his gopheritis behind him.

Ichiro Suzuki, OF, New York Yankees (ESPN: 1.1 per cent; CBS: 6 per cent): Ichiro hasn’t exactly been lighting it up lately, but could be worth a look now that Alfonso Soriano has been DFAed. Even at 41, Suzuki can steal you a base or three.

Michael Saunders, OF, Seattle Mariners (ESPN: 2.1 per cent; CBS: 13 per cent): Heading into the season, we slotted Saunders 86th in our Outfield Rankings, and despite an injury, he’s exceeded that a bit, playing at a top 75 level. Since returning from the DL, he’s hitting .290 with five runs, four RBI, a homer and a steal in eight games, so consider him in AL-only leagues.

Lucas Duda, 1B, New York Mets (ESPN: 32.7 per cent; CBS: 49 per cent): Duda has been flashing the long ball lately, hitting his third jack in nine games on Friday, prompting the Mets to shift him back to cleanup on Sunday.

Crave more in-depth Fantasy analysis? Then join us every Thursday at 9 p.m. EST for RotoRob Fantasy Baseball Weekly Podcast on Blogtalkradio as we entertain and edify you for an hour or more each week. This week, RotoRob is joined by Joel Henard of the Fantasy Insiders. Tune in here.

By RotoRob
Tags: Stephen Drew
This entry was posted on Sunday, July 6th, 2014 at 4:08 pm and is filed under BASEBALL, RotoRob, The Wire Troll. You can follow any responses to this entry through the RSS 2.0 feed. Both comments and pings are currently closed.