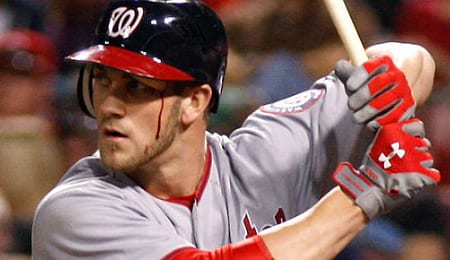 The strategy for amassing our Good Eyes team was to find guys with power or power potential, who struck out less than 100 times last season. Three months into the season the experiment is now flowing, but not gushing like we hoped.

From April to May, we catapulted from 276th place to 74th, thanks in large part to Edwin Encarnacion’s 97-point month. On the surface, June didn’t seem to be very kind to us but the good news is that we weren’t the only ones. We ended the month in 45th place, even though we scored 161 points compared to 219 in May. This leaves us extremely optimistic about the return of Bryce Harper who has so far contributed minus six points to our season total. With a full lineup everyday and some calcium supplements for them old bones of Matt Holiday (just five homers) we like our chances.

Hanley Ramirez (13 points): At least Ramirez finished above zero. Just two long balls and 14 RBI combined with 11 strikeouts was an okay performance, but we crave more.

Ian Kinsler (32 points): Sixteen Ks was Kinsler’s highest monthly total of the season. Fortunately, he also had highs in homers (six) and RBI (19).

Buster Posey (15 points): Posey’s 10 strikeouts put a dent in his 15 RBI. Thankfully he added a pair of jacks for a respectable total.

Pablo Sandoval (minus 4 points): Even though Panda hit .301 in June, he only had one homer and nine RBI to show for it. Thus, his 17 whiffs were a big negative.

Adrian Beltre (36 points): Four bombs and a superb 22 RBI left no one worried about his eight strikeouts.

Jose Bautista (4 points): After averaging 36 points for the first two months, Bautista only mustered one homer and nine RBI in June (while fanning 10 times). A hamstring issue basically cost him the last 10 days of the month.

Matt Holiday (8 points): In 814 career at-bats in July, Holliday has 50 homers. Granted Coors Field factored into that, but it is still a ratio of a homer every 16.3 at-bats, so we’re hoping for bigger things from the vet this month.

Bryce Harper (1 point): Cheers to Harper’s return. Reports suggest that he is not pleased with his PT and role on the team, but Manager Matt Williams refutes that (see video below). Now, let’s flex some muscle Sir Harper!

Now it’s your turn. Let us know in the comments below whether you’ve tried RotoDerby and what you think of it.

Crave more in-depth Fantasy analysis? Then join us every Thursday at 9 p.m. EST for RotoRob Fantasy Baseball Weekly Podcast on Blogtalkradio as we entertain and edify you for an hour or more each week. This week, RotoRob will be joined by RotoRob.com MLB/NFL Writer Michael Seff, and we’ll discuss the upcoming All-Star Game. Tune in here.

By Josh Johnson
This entry was posted on Wednesday, July 2nd, 2014 at 9:42 pm and is filed under BASEBALL, Fantasy Leagues, Josh Johnson. You can follow any responses to this entry through the RSS 2.0 feed. You can skip to the end and leave a response. Pinging is currently not allowed.