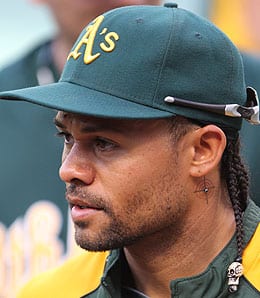 Coco Crisp and his skull-tipped dreads slipped in May thanks to injuries. (en.wikipedia.org)

Thanks to bevy of injuries Coco Crisp failed to match the respectable dozen points he accumulated in April. His zero long balls and four RBI (one of which was on a bases-loaded walk — see video below) were made even worse by 19 strikeouts. (-8 points).

We did have a better month thanks to Encarnacion, improving from 276th place in April to 74th place in May. At this rate, we’ll be in the money this month!

Hanley Ramirez: Ramirez’s power was better in May as he smoked six dingers compared to just three in April. He also drove in 21 runs, which counters his 19 strikeouts nicely. (32 points)

Ian Kinlser: Kinsler’s 40 May hits was 12 more than hs April output. Unfortunately, he only went yard twice and his nine RBI were more than negated by 10 strikeouts. (nine points)

Buster Posey: Posey managed just one homer in May after tying a career with six in April. (seven points)

Pablo Sandoval: After a dismal April in which Sandoval hit just two jacks, he made some major adjustments. His six homers and 19 RBI were a nice surge, washing away 15 strikeouts. (34 points)

Adrian Beltre: An April DL stint cost Beltre owners a lot. He is now back and his five homers and 15 RBI covered up his 20 strikeouts. (20 points)

Jose Bautista: Bautista didn’t match his April total of eight jacks, but we will take his steady total of six. He drove in 22 runs and only struck out 17 times, both totals besting his April effort. (35 points)

Matt Holliday: Normally consistent slugger Holliday hit just one homer in May. His 11 RBI were masked by 23 strikeouts. (Minus 7 points)

Bryce Harper: Last May, Harper also spent some time on the DL, but he did hit three homers with five RBI and 14 strikeouts. That would good for three points in RotoDerby. Since he didn’t play at all in May 2014, he scored zero, which actually beat his April total of minus seven points.

Now it’s your turn. Let us know in the comments below how your RotoDerby team is doing.

By Josh Johnson
Tags: Edwin Encarnacion, RotoDerby
This entry was posted on Saturday, June 7th, 2014 at 7:06 pm and is filed under BASEBALL, Fantasy Leagues, Josh Johnson. You can follow any responses to this entry through the RSS 2.0 feed. Both comments and pings are currently closed.