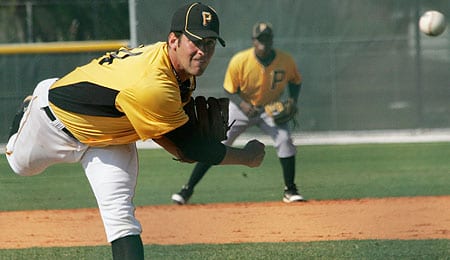 It’s about time for the Fantasy world to notice Brandon Cumpton. (Piratesprospects.com)

Kole Calhoun, RF, Los Angeles Angels: Wake up, ESPN owners! Only 19.9 per cent of you are up on KC’s recent surge, although 59 per cent of CBS leagues feature some sort of Calhoun ownership. After an ankle injury shackled him earlier in the season, he is heating up this month with a .328 average, 882 OPS and 12 runs. Calhoun hit his sixth home run of the season (third this month) Sunday against Texas, and rapped four hits in an Angels rout in Cleveland Wednesday.

Brandon Cumpton, SP, Pittsburgh Pirates: Perhaps Sunday’s dominant start against the Cubs will make Fantasy owners take notice of Cumpton. Owned in only one per cent of ESPN leagues (up 0.8 percentage) and five per cent of CBS leagues, he is rolling after a disastrous outing May 31 against the Dodgers. The 25-year-old righty is 3-0 with a 3.09 ERA over his last four starts with two quality efforts — none more impressive than Sunday when he blanked Chicago over seven innings on just two hits. Cumpton also looked very sharp against the Reds last week (see video below). He’s not a strikeout machine by any stretch (5.52 K/9) but his recent consistency should have you taking notice.

Scott Van Slyke, LF, Los Angeles Dodgers: We recently likened Gregor Blanco to the Dos Equis man, and perhaps Van Slyke is worth doing the same. He doesn’t always play, but when he does, he picks his spots. The son of Andy is barely owned (0.4 per cent ESPN, 3 per cent CBS), but the bearded wonder may be worth a look now while Carl Crawford is still on the DL. Scotty V.S. has hit in his last five games and a couple of weeks ago, clubbed two homers in a game. All told, he has six dingers on the year — in just 90 at-bats.

Erik Bedard, SP, Tampa Bay Rays: The veteran has just enough left to take a flier on, as evidenced by a strong effort on Sunday against Houston. Bedard racked up 8 Ks in 5 1/3 innings and is averaging 10.71 K/9 in his last four outings. He is 3-5 with a 4.25 ERA and 57 strikeouts in 65 2/3 IP for the year, numbers that hardly make it shocking that he’s owned in only 1.3 per cent of ESPN leagues and 8 per cent of CBS leagues.

Danny Espinosa, 2B, Washington Nationals: Perhaps Espinosa has found his swing. Though owned in only 1.8 per cent of ESPN leagues and 12 per cent of the CBS world, the Nats second-sacker has turned a .125 May into a .303 June, including four multi-hit efforts in his last seven. The power is missing, as Espinosa hasn’t homered since May 12, but Fantasy owners might find their interest piqued by his .357 June OBP.

Shin-Soo Choo, LF, Texas Rangers: Choo has been a fascinating statistical anomaly this month. Universally owned except by one per cent of CBS users, Choo is driving in runs (10 in 19 games), but is hardly getting on base, batting .145 with a very uncharacteristic .283 OBP. His season average has dipped to .248 despite a sound 763 OPS. Choo has seven homers and 28 RBI but just three stolen bases.

Jed Lowrie, SS, Oakland Athletics: Speaking of disappearing production from AL West players, Lowrie (owned in 63 per cent of ESPN leagues and 76 per cent of CBS leagues) is becoming familiar with posting daily bagels. In fact, he is RBI-less in his last 10 games, with just one jack and six RBIs for the month. Lowrie is batting .107 since June 5 and his season OPS now sits at 487.

Yu Darvish, SP, Texas Rangers: Sorry, one more AL West-er. Could it be? The great Yu, actually unowned in two per cent of CBS leagues, has struggled with the walks in recent starts, averaging 3.3 in his last seven and issuing nine in his last two outings combined. Two division rivals – the A’s and Angels – have roughed him up to the tune of 0-2 with a 5.54 ERA despite continued high K numbers. Darvish has allowed four earned runs or more in three of his last four starts. It’s all likely an aberration, but his career-long struggles with Oakland and recent intra-division issues have lowered his status to a mere mortal one.

Jose Reyes, SS, Toronto Blue Jays: Not surprising given that the veteran shortstop is the table-setter for the big boys, the Jays’ recent slide through New York and Cincinnati coincided with a dip in Reyes’ production. He is 2-for-24 (.083) in his last six games and exited Saturday’s game with right knee soreness, something returning home to the turf of Rogers Centre won’t help. Reyes is almost completely owned across the board (100 per cent ESPN, 99 per cent CBS), but he has only four stolen bases since May 27, a span in which his OBP has dropped from .323 to .314.

Now it’s your turn. Let us know in the comments below which players you’re seeing rising or falling lately.

By Michael Seff
This entry was posted on Monday, June 23rd, 2014 at 9:39 pm and is filed under BASEBALL, Diamond Stocks, Michael Seff. You can follow any responses to this entry through the RSS 2.0 feed. Both comments and pings are currently closed.