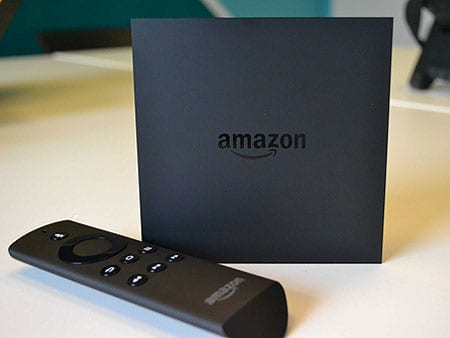 Although most of our focus over the years has been on software, we do occasionally dip into the hardware market. That’s what we’re doing here as we take a look at Amazon’s new Fire TV, a hybrid streaming device and gaming console. Let’s see what this product, which retailed for US$99, has to offer and how it stacks up against comparable devices like Roku and Apple TV.

Both the physical unit and remote control look sleek and have just enough weight to feel like they’re solidly constructed — unlike the Roku, which has always had kind of a cheap plastic appearance. We placed the Fire TV on top of our Xbox One, and it basically disappeared as it’s less than three-quarters of an inch wide. Our review unit included an HDMI cable, though according to the specifications listed on the site it is not part of the retail version.

The remote control has a pair of great features: (a) it doesn’t require line of sight to work; and (b) it has a built-in microphone for voice search. The former is a godsend for people that swivel their televisions, allowing you to control the Fire TV without twisting your wrist and trying to aim at the unit itself. The latter works extremely well and certainly beats selecting characters individually.

On the downside, however, voice doesn’t function within the apps so, for instance, you cannot search Netflix using it. Instead you’re left to fumble with the on-screen keyboards, which seem even more archaic when you’ve been flying around the Amazon section using your voice. We don’t love the central navigation wheel, either, but it’s not bad enough to be a drawback.

Outputting at 1080p, the Fire TV offers a consistently excellent picture, and only once in all the hours spent watching programming did it hiccup and lose the signal. At no point did we need to reset the unit to reestablish a connection, which is something we’ve been forced to do from time to time with Roku (and both units work off the same wireless service).

Where things get a little dicey is with the number of available apps. Yes, it has most of the basics covered with Amazon Instant Video (of course), Netflix and Hulu Plus all on offer, but it’s missing some pretty significant ones. While the most notable omission is HBO Go (though you can view select HBO programs through Amazon Prime and the app itself should be appearing later in 2014), there are plenty of others (WWE Network, Vudu, MLB.TV, IGN, etc.) that we have downloaded on Roku and gaming consoles that aren’t available here.

To be fair, it’s still very early in the Fire TV’s life cycle, and I’m sure most (if not all) of these will make their way onto the service eventually. Still, it’s easily the biggest drawback at this point, one that gives more established streaming devices an advantage.

By default you’ll find yourself on the Amazon Instant Video service with a series of subcategories along the left-hand side and a tile setup for movies, apps, games and more grouped together. It’s pretty slick and looks light years more advanced than the quaint Roku home screen. What’s unusual is that there appears to be no dedicated Prime section — something found in the Amazon app on every other console or streaming player we can think of. You can check out “top” and “new” Prime titles, but they’re limited in scope (usually 99 or 150) and don’t let you see everything.

By far the biggest difference between Fire TV and it’s immediate competitors is the unit’s ability to play a high number of games. Most of the titles require a Fire Game Controller, which sells separately for US$40, however, so you’ll need to add that into the overall cost if you plan to do any kind of semi-serious gaming with it. The controller itself should be instantly familiar to anyone that’s done any gaming on the Xbox family of consoles as that’s the clear inspiration for Amazon’s controller.

There are a few extra buttons to be aware of versus its counterparts as it can also be used in lieu of the Fire TV’s remote to navigate the menus and play programs. It works well in all facets, ably controlling games and being a bulkier yet still effective means to utilize the unit itself. The analog sticks do seem to lack a little subtlety, but I never felt like it was much of a detriment with the games I played.

Speaking of the games themselves, Fire TV’s current landscape is definitely a mixed bag. There are some quality original offerings (Sev Zero) and ports (Minecraft, Terraria, The Walking Dead, etc.) alongside others that feel completely rushed over from Android — to the point that the touch screen controls haven’t been reassigned, which means some aspects are literally unplayable. There’s also some price point shenanigans with games appearing to sell for one price when in reality you’re not unlocking the entire game (read reviews carefully before buying).

As of this moment, gaming on the Fire TV still feels like a work in progress. There are some truly enjoyable games available, but many of them can be played elsewhere. Of course, if you’re not gaming on a console or PC, this is a chance to experience them — albeit at a similar initial buy-in to a low-GB Xbox 360, which can stream as well (though you’d need to fork out cash for Gold). The true test will be when we start to see what Amazon Game Studios has up their sleeve.

Now that we’ve had some hands-on time with all aspects of Amazon’s Fire TV, it’s safe to say this is the most diverse streaming device out there. Everything feels well made and looks slick, and the expanding app and game library continues to add value. This would be a great bridge for non-gamers looking to dip their toe into the marketplace or as a bedroom standalone for those that want all their bases covered in a single device.

By Herija Green
Tags: Amazon Fire TV
This entry was posted on Tuesday, June 24th, 2014 at 10:50 pm and is filed under Herija Green, Product reviews. You can follow any responses to this entry through the RSS 2.0 feed. Both comments and pings are currently closed.