The Wire Troll: Kolten Wong Returns With a Vengeance 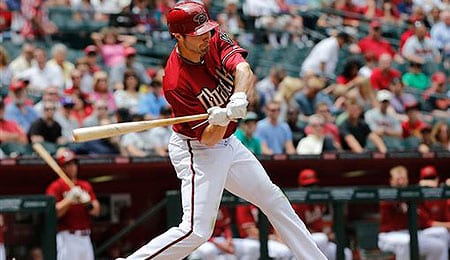 A.J. Pollock is red hot in May. (AP Photo/Matt York)

As we head into the Victoria Day long weekend it has been another challenging week with more starting pitching falling by the wayside. Jose Fernandez underwent Tommy John surgery Friday and Martin Perez is booked for his visit with the surgeon on Monday. Dillon Gee hit the DL with a strained right lat and on a more serious note both Andrew Cashner and Gio Gonzalez are scheduled for MRIs Sunday for elbow related woes. When will it end?

One brief respite from the doom and gloom is the pending promotion and two-start week for Trevor Bauer. We recommended Bauer back in mid-April after his debut against the Padres and we hope you listened and bought early as he’s now owned in 62 per cent of CBS Leagues. If by chance he isn’t owned in your league be prepared to seriously dip into your FAAB this weekend.

Without further ado, let’s take a look at this week’s Troll recommendations.

A.J. Pollock, OF, Arizona Diamondbacks (CBS: 24 per cent owned, ESPN: 13 per cent): Pollock, who we slotted in the top 95 in our preseason Outfield Rankings, has smacked two long balls, scored seven runs, is a perfect six-for-six swiping bases and is driving in runs (see video below) in May. Toss in the .463 OBP and the fact that he has no serious competition for the job in centre field and it begs the question: What are you waiting for?

Drew Hutchison, SP, Toronto Blue Jays (CBS: 47 per cent owned, ESPN: 3 per cent): In our very first Troll of the year we gave the thumbs up to acquiring Hutchison. There have been some bumps along the road but considering he was coming of Tommy John surgery, that isn’t entirely shocking. After Hutchison’s last gem, Friday’s complete game shutout on the road against Yu Darvish and the Rangers, it’s time for a reminder. Hutchison’s K/BB ratio of 55/16 shouldn’t be sitting anywhere but on your active roster.

Jenrry Mejia, SP/RP, New York Mets (CBS: 31 per cent owned, ESPN: 6 per cent): The current flavour of the week as the Mets’ closer could actually stick in the role. New York has moved Mejia from the rotation, where he struggled badly, into its beleaguered bullpen and he earned his first save Saturday against the Nats. His swing and miss stuff could translate very well in a late-inning role.

Kolten Wong, 2B, St. Louis Cardinals (CBS: 36 per cent owned, ESPN: 4 per cent): After a short stint down on the farm where Wong tore the cover off of the ball (two homers, 10 RBI, five steals, .344 BA), he’s returned to the Cards with a vengeance. He’s gone 4-for-8 with three runs and two swipes in his first two games back and is well on his way to making us forget his horrible April.

Phil Hughes, SP, Minnesota Twins (CBS: 50 per cent owned, ESPN: 9 per cent): Recommending a Twins starter? It’s almost blasphemy, isn’t it? Hughes stumbled a bit out of the gate, but has now reeled off a string of four wins in his past five starts while allowing only seven earned runs. In 47 1/3 IP, he’s allowed only six walks — which is a guaranteed recipe for success.

Chad Qualls, RP, Houston Astros (CBS: 18 per cent owned, ESPN: 7 per cent): Yes, we know, it’s Chad Qualls. But right now he’s getting saves in the Houston pen. When your principal competition is the recently acquired Kyle Farnsworth it should provide at least some job security. The fact that Qualls has a win and two saves in his past three appearances also helps considerably.

Sean Doolittle, RP, Oakland Athletics (CBS: 28 per cent, ESPN: 10 per cent): Jim Johnson and Luke Gregerson simply haven’t been getting it done. Meanwhile, Doolittle has reeled off seven consecutive appearances without allowing a run, and in those 8 1/3 IP he’s struck out 13. He earned the last save in Oakland so has to be considered the current front runner for the job.

Anthony Gose, OF, Toronto Blue Jays (CBS: 2 per cent owned, ESPN: unowned): Until the return of Colby Rasmus, Gose should be a fine option for steals in deeper leagues.

Zack Britton, RP, Baltimore Orioles (CBS: 38 per cent owned, ESPN: 13 per cent): Tommy Hunter is struggling badly, allowing eight earned runs in his last five outings. Britton earned his first career save Thursday and should be on the radar in case Hunter can’t right the ship.

Jesus Aguilar, 1B, Cleveland Indians (CBS: 6 per cent owned, ESPN: unowned): The Tribe is starting to run out of patience with Nick Swisher, promoting Aguilar from Triple-A Toledo, where he had seven homers in 131 at-bats. Aguilar is worth a look in deeper formats.

Anthony DeSclafani, SP, Miami Marlins (CBS: 7 per cent owned, ESPN: unowned): DeSclafani has the impossible task of stepping into Fernandez’s rotation spot, but acquitted himself fine in his debut. DeSclafani went six innings, allowing only two earned runs with seven punchouts, which guarantees him another kick at the can.

Andrew Heaney, SP, Miami Marlins (CBS: 25 per cent, ESPN: unowned): It’s only a matter of time before we see Heaney in the Marlins rotation. If you want to avoid the Bauer situation mentioned above, it’s time for an early bid and stash strategy.

Jacob deGrom, SP, New York Mets (CBS: 11 per cent owned, ESPN: 1 per cent): deGrom put up a 2.58 ERA in the hitter’s paradise at Triple-A Las Vegas, so that’s nothing to sneeze at.

Crave more in-depth Fantasy analysis? Then join us every Thursday at 9 p.m. EST for RotoRob Fantasy Baseball Weekly Podcast on Blogtalkradio as we entertain and edify you for an hour or more each week. Stay tuned to see who RotoRob’s guest will be this week. Tune in here.

By Tim McLeod
This entry was posted on Sunday, May 18th, 2014 at 4:03 pm and is filed under BASEBALL, The Wire Troll, Tim McLeod. You can follow any responses to this entry through the RSS 2.0 feed. You can skip to the end and leave a response. Pinging is currently not allowed.