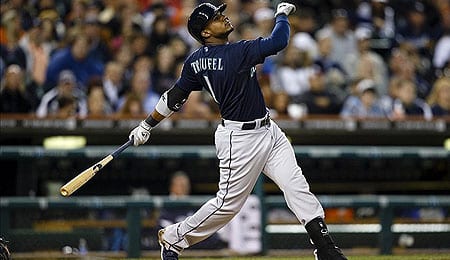 Today, we’re going to check in on the Los Angeles Dodgers to see how they’re doing and what storylines are developing out of Chavez Ravine.

After dropping two out of three at home to the Rox this weekend, the Dodgers have slipped to third place in the NL West, half a game behind Colorado, and now just 1.5 up on the fourth place Padres, who are holding their own lately. Other than awful Arizona, this division is super tight — just 2.5 games separate first from fourth, making it the most competitive division in the game right now.

To kick off a nine-game trip, the Dodgers now head to Minnesota to for a three-game interleague series. Normally, playing the Twins is good news, but they’ve played well lately, are over .500, and — so far at least — are no longer pushovers. Minnesota is piling up the runs recently, with 37 in the past six games alone.

Of course, the fact that unbeaten Zack Greinke takes the mound for LA Tuesday should buoy hopes of getting back on track. Could he help usher in the franchise’s historic 10,000th win?

Hanley Ramirez (thumb) should be back Tuesday after coming out early Saturday (but not before driving in his 10th run of the season; see video below). The fact he stroked a pinch-hit single Sunday suggests he’s okay. Manager Don Mattingly said Sunday was a planned off day for Ramirez anyway. Hopefully, this is much ado about nothing.

However, what’s interesting about this H-Ram situation is that on Sunday the Dodgers recalled infielder Carlos Triunfel from Triple-A Albuquerque (sending down righty reliever Jose Dominguez). Triunfel can play shortstop, second and third base, so if Ramirez’s thumb is worse than the team is letting on, they are covered with this move. Triunfel has been in the Mariner organization since being signed out of the Dominican Republic way back in 2007 and in parts of three seasons with Seattle, he’s gone 11-for-66. He’s a solid contact hitter, but lacks patience to a fault.

Now it’s your turn. Let us know in the comments below how you think the Dodgers will fare on their nine-game road trip.

By RotoRob
This entry was posted on Tuesday, April 29th, 2014 at 2:20 pm and is filed under BASEBALL, RotoRob, Team report. You can follow any responses to this entry through the RSS 2.0 feed. You can skip to the end and leave a response. Pinging is currently not allowed.