The Wire Troll: Drew Gooden to the Rescue 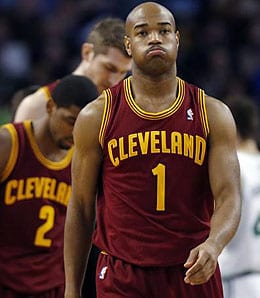 As frustrating as it is being a Cav, Jarrett Jack is now running the offense. (AP Photo/Michael Dwyer)

For those of you participating in your Fantasy basketball playoffs, best wishes as you attempt to secure a championship. With that goal in mind, we recommend the following players to help with your last-minute push.

Jarrett Jack, PG, Cleveland Cavaliers: With the tricep injury suffered by Kyrie Irving, Jack is now the Cavs’ starting point guard. Jack will certainly get the minutes and offensive opportunity while Irving is sidelined (minimum two weeks), so don’t hesitate to add Jack to your roster, as he’s proved he can score (see video below).

Avery Bradley, SG, Boston Celtics: Bradley is finally starting to return to full strength after being plagued by a chronic ankle injury. His scoring has improved over the last several games and it shouldn’t be long before he regains his starting job.

Ray Allen, SG, Miami Heat: Will Father Time ever catch up to Allen? In his 18th NBA season at the age of 38, he can still fill up the stat sheet. Over his last four games, Allen is averaging 18.8 points and three treys. With the Heat still vying for home court advantage throughout the playoffs, he should continue to spark the Heat bench attack.

Danny Green, SG/SF, San Antonio Spurs: Green has been very erratic scoring the basketball this season, but certainly has the ability to be a proficient scorer. Like the aforementioned Allen, he’s been hot over his last four games including games of 14, 15 and 16 points with a total of 12 three-pointers made.

Drew Gooden, PF, Washington Wizards: When power forward Nene Hilario injured his knee, the Wizards opted to sign the veteran Gooden to a 10-day contract. Gooden has performed far above expectations with several double digit scoring games and ample rebounds off the bench. His contact has now been extended through the end of the season and Fantasy owners may want to follow suit and add the vet for the home stretch.

Shawn Marion, SF/PF, Dallas Mavericks: Six weeks ago, we gave the Matrix some love, but he remains available in over 50 per cent of ESPN leagues. He’s hit double figures in four straight games and had his ninth double-double of the season on Wednesday, adding five dimes and two steals. Marion is still occasionally capable of helping you across the board.

Giannis Antetokounmpo, SF/SG, Milwaukee Bucks: Impressive rookie Nate Wolters fractured his shooting hand on Thursday and this should provide additional opportunity for Antetokounmpo, the Bucks first round pick last year. “Alphabet,” as he is appropriately nicknamed, is only 19, but has the skills and ability to be a solid future NBA player.

Gorgui Dieng, Minnesota Timberwolves: Dieng was a key member of the NCAA defending champion Louisville Cardinals before being selected in the first round by the Wolves. Since starting pivot Nikola Pekovic has been out with assorted leg ailments, Dieng has opened eyes with increased playing time. On Thursday, he registered 22 points and 21 rebounds versus Houston following an 11-board, five-block performance earlier in the week.

Omer Asik, Houston Rockets: Asik was a solid double-double contributor for the Rockets last season before Dwight Howard came to town, but when Superman suffered a mildly sprained ankle this week, it led to a pair of productive games for Asik. Keep an eye on Howard’s situation, knowing that Asik is a very capable backup.

Zaza Pachulia, Milwaukee Bucks: Pachulia is another dude we pumped six weeks ago, but he’s recently taken over as the starting centre and is getting it done. Don’t expect too many monster nights like he enjoyed Tuesday, but the aging vet is doing enough to provide some value in deeper formats.

By Bob Raymond
Tags: Drew Gooden, Jarrett Jack
This entry was posted on Saturday, March 22nd, 2014 at 12:42 am and is filed under BASKETBALL, Bob Raymond, The Wire Troll. You can follow any responses to this entry through the RSS 2.0 feed. Both comments and pings are currently closed.