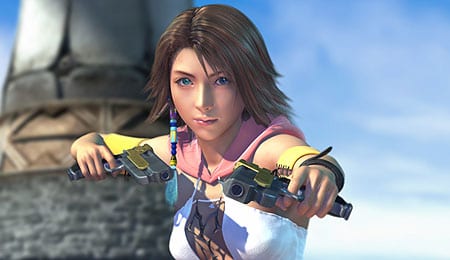 Eat your heart out, Lara Croft.

When Final Fantasy X was originally released back in 2001, it represented a lot of firsts for the storied franchise. It was the first on the PlayStation 2, the first to trade the excellent pre-rendered backgrounds for 3D locations and, perhaps most significantly, the first to feature voice acting. Then, two years later, it became the first installment to garner a sequel with Final Fantasy X-2.

Given all the new ground these titles broke at the time, it should come as no surprise that they’ve been chosen to be re-released with upgraded graphics, additional content and even a re-arranged soundtrack. Bundled together and dubbed Final Fantasy X/X-2 HD Remaster, let’s see how these games hold up after more than a decade on the sidelines.

With its turn-based combat and linear exploration, FFX is an extremely easy game to get a handle on in terms of the controls. About the only time you’ll be asked to doing anything semi-complex is during the characters’ overdrive attacks, which often trigger quick-time events (QTEs), and most of those are quite simple to perform. The game’s sphere grid is a little finicky at times, and it would’ve been nice to be able to swivel the camera, but those are minor quips.

Although FFX-2 is a direct sequel, it moves away from the traditional turn-based approach to battles and replaces it with more of a real-time system. Actions do queue up when characters switch outfits, but for the most part it’s designed to elevate the pace of fights. Navigating the field map is more interactive as you can do minor things like jump over gaps or climb surfaces, though camera manipulation is still absent. Both titles handle very well, and we rarely felt at odds with their respective setups.

With diverse locations, intimidating foes and Lulu’s breasts, Final Fantasy X was a visual dynamo when it hit the PlayStation 2, and Square has done yeoman’s work in upgrading the graphics. This is especially true with the main characters, who all look great with their unique hair and coluorful outfits (even if their lips don’t synch up at all). Of course, the series is renowned for the phenomenal cut scenes, and those have been overhauled to come across in all their high-definition glory.

Holes exist in the presentation, however, as clearly some of the lesser aspects of Spira have been given short shrift. Nowhere is this more evident (or jarring) than when viewing in-engine dialogue scenes in which your group is joined by flat-faced NPCs. They look completely out of place interacting with Tidus or Wakka, and they serve to remind you of the game’s age.

Final Fantasy X-2 shines and fades in the same ways. The trio of heroines have been immaculately redone, and with sharper graphics to begin with, they end up looking better than anyone in FFX. The sequel is plagued by the same mix of pristine and outdated, however, and it’s even more pronounced here when staring at one of the main characters delivering lines of dialogue in front of a backdrop that looks completely flat — think of it like a movie with bad green-screen effects.

Square remixed the audio for FFX, and while it certainly rings out more clearly, it did feel like there were some suspect choices when it came to instrumentation. That said, FFX has one of the great soundtracks in gaming history, and nothing that’s been done has changed that. As for FFX-2, it goes decidedly non-traditional with more upbeat modern tunes, including the J-pop-influenced opening number. While not bad, we never warmed to it relative to other FF efforts.

As noted, these were the first two games to be fully voice acted, and as such it shouldn’t be a surprise that the work can be uneven. There was always a whiny feel to Tidus that failed to match his deeds, and Wakka’s accent wears thin when he’s given too many lines. In the sequel, it’s unnerving how much your shipmate Shinra sounds like Shelly Marsh from South Park.

Forget about Tidus’ goofy voice or his distressing resemblance to pre-surgery Meg Ryan, Final Fantasy X spins a serious, multi-layered yarn that is one of the series’ best. It hits on plenty of important emotions like love, duty, sacrifice and loss, all while weaving together a compelling story arc that has your group of seven heroes fighting valiantly against the indomitable Sin.

Paired with that strong narrative is the excellent sphere grid leveling system. Here, each character begins at a specific point on a massive grid surrounded by class-appropriate nodes. These can then be activated by moving to an adjacent point and using the correct sphere (power spheres for strength and hit point bonuses, ability spheres for new skills and so on). It holds up incredibly well in creating a feeling of perpetual advancement, and there’s a fair amount of freedom for customization once you move past the early stages of development.

In traditional JPRG fashion the combat is turn based. This may be a foreign concept to those that started playing FF games in the 360/PS3 generation, and as such we could see some gamers finding it a little slow. For us, however, it felt like seeing an old friend. Being able to take a look at a battlefield, come up with a winning strategy and then execute it is one of our favourite things in gaming, and it’s why the pre-PS3 entries have been our favourites in the series. There’s a cerebral element to battle that just gets lost when attacks are flying at you in real time.

Both games feature the fictional sport blitzball, which just happens to be our favourite mini game in the FF universe with the possible exception of raising chocobos in Final Fantasy VII. We prefer the way it’s handled in X versus the more managerial feeling X-2 version, but it was great fun diving back into the world of Jecht shots, in-depth scouting, recruiting new players and winning tournaments.

Final Fantasy X-2 picks up two years after the original, focusing on FFX mainstays Yuna and Rikku along with newcomer Paine, who takes the place of Lulu, with the three of them forming a sphere-hunting crew called the Gullwings. It’s an interesting change of pace in terms of the tone, and it also bucks FF in a number of ways, most notably a world that’s largely accessible from the start and a small cast of playable, all-female characters.

While not the equal of its predecessor in terms of story or character development, FFX-2 does feature a revamped version of the job system (seen in several installments, including the wonderful Final Fantasy Tactics). Known as dressspeheres, the three heroines can switch roles by changing clothes in the midst of battle, allowing you to mix and match strategy in a way usually done by having more characters available in your party. It takes a little getting used to, and I don’t think it’s the best implementation of the system, but it’s still quite enjoyable.

Beyond all the presentation improvements, both games include content previously unseen in North America. An expert sphere grid, which allows for additional micromanaging of your characters’ development, is the most interesting FFX feature, while the mildly entertaining Eternal Calm offers a glimpse into the timeframe between the two games. FFX-2 gets more on the gameplay side, including the monster-raising Creature Creator and the pseudo epilogue Last Mission. They’re not necessary to sell the game, but they’re nice additions for those that have already played through both titles.

Final Fantasy X is a great RPG and one of the best games in the series’ history, and X-2, while no doubt a little on the quirky side, still connects on the most important aspects. Whether you played them before or not, as long as you’re an RPG fan the Final Fantasy X/X-2 HD Remaster is a great purchase.

One of the nice things about the smaller OLED screen is that it’s much tougher to pick up what elements got the full overhaul and which ones did not. Unfortunately, that means it’s sometimes harder to spot visual cues when exploring, such as during the cloister of trials. It also gets in the way with the sphere grid in FFX as it’s both more difficult to traverse and to read. In battle, the turn-based approach holds up well, and there are even a couple Vita-specific tricks such as a menu you can swipe in for quick actions.

In a nice touch, the Vita and PS3 versions can share save files. It’s a seamless process to upload from one and download to the other, though on the Vita you’ll need to close the application entirely and relaunch to access the file transfer function. On the PS3, there’s a quit option available when paused that takes you back to the game select menu, which is more convenient.

To be clear, it’s not a cross-buy — if you want to play on both systems you’ll need two copies (and on the Vita, FFX-2 must be downloaded) — but it is a good option to have for those that want to play at home and on the go. Plus, with both versions priced at US$39.99, it’s not cost prohibitive to take the plunge.

By Herija Green
This entry was posted on Monday, March 17th, 2014 at 9:27 pm and is filed under Herija Green, Video Game Reviews. You can follow any responses to this entry through the RSS 2.0 feed. Both comments and pings are currently closed.