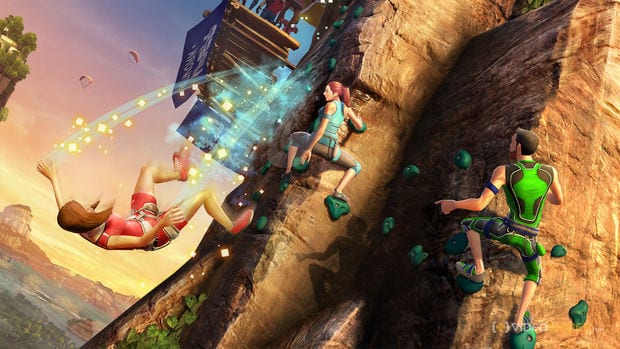 Even Microsoft’s most ardent supporters would have trouble classifying the Kinect as a success, at least based on its impact on gaming as a whole. We’ve yet to see anything transcend the same sort of titles that populated the Nintendo Wii with most of the library a mix of on-rails action and mini games. With the launch of the Xbox One, consoles were packaged with the Kinect 2.0, but there have been few games to hit stores with the peripheral in mind.

Well, those that have been waiting to dust off their Kinect finally get the opportunity with the launch of Rare’s Kinect Sports Rivals — the next-gen follow up to the developer’s two Xbox 360 titles. Will it make early adopters feel better about the forced purchase of the add-on? Or is it better off being ignored?

Bearing in mind that each of Rivals’ six games handles differently (which makes allocating a single score to the controls rather difficult), it’s clear that the Kinect 2.0 is a more impressive piece of tech than its predecessor. It’s not perfect by any means, and its shortcomings can lead to frustrations when your failure really had nothing to do with you, but it adequately reads a lot more movements. As expected, though, some events are better represented than others.

Menu navigation — frequently a problem in Kinect titles for the Xbox 360 — works well and thoughtfully offers you the option to use voice commands or (gasp) the Xbox One controller if you prefer. This also applies to making changes to your avatar.

Local multiplayer remains an issue with the Kinect as it struggles to separate players and decipher who is doing what all too frequently, sending you or your opponent into histrionics or, more likely, the pause menu where you can effectively reset the action. Again, it’s better than the last Kinect, but it still feels like there’s meaningful work to be done.

Appealing is probably the best way to describe the world of Kinect Sports Rivals. Everything is lush and vibrant with plenty of trees, rocks and waterfalls that seem reminiscent of Pandora from Avatar. The game’s various factions create a nice blend of colours among the (over)active crowds, creating a Hogwarts type of vibe. The characters look solid enough with their jagged, angular physiques, and there is no shortage of bright, flashing effects.

While some of those effects straddle the line of being over the top, the audio habitually steps way over the line with its obnoxious Coach and screaming announcer — because, you know, being really loud is totally extreme (think monster truck commercials: SUNDAY! SUNDAY! SUNDAY!). There’s also a number of mandatory cut scenes that’ll send you scrambling for the mute button. The music itself isn’t too bad, but that’s small consolation when everything else is so abrasive.

After the Kinect scans you in and creates a pretty respectable virtual likeness, Rivals moves you straight into a series of tutorials with the aforementioned Coach abrasively teaching you the ropes. It took a little more than an hour to complete the process of unlocking the six events: wake racing, rock climbing, target shooting, soccer, bowling and tennis.

Wake Racing: This is probably the best of the bunch, allowing you to crash across the waves and dodge between old ships. You position your hands as though you’re holding handlebars, clenching your first to accelerate and opening your hand to slow down — movements the Kinect recognizes quite well. Add some leaning for midair tricks and foot stomping to boost and it makes for a fun time. If you get tired you can sit down and continue to play that way.

Rock Climbing: While we wouldn’t typically associate rock climbing with fun, the Rivals version is well implemented and quite enjoyable, especially when it starts introducing more elements such as wind gusts and climbers that want to take you down. Here you’ll grab on-screen handholds and pull yourself up. Gaps can be cleared by actually jumping, and a stamina bar adds a level of strategy.

Target Shooting: If you played the Gunstringer you’ll be well prepared for this event as you make a gun with your fingers and fire at targets on the screen. There’s some memorization involved and an occasional lunge to either side to dodge turret fire, but it’s definitely straightforward stuff. Still, it can be fun for two players since it doesn’t require exaggerated movements.

Soccer: Oh, boy. Feeling more like foosball than the beautiful game, Rivals’ take on soccer is painful both in concept and execution. Reduced to a one-on-one affair in which you alternate striking and goaltending, soccer never feels responsive or fun, particularly when trying to score goals. We’ve been critical of previous Kinect Sports activities, but this might be the low-water mark for the franchise.

Bowling: There’s not much to say here as we’ve all known bowling can work as a virtual motion sport since the Wii version. If you liked that, you’ll like this. It also supports four players.

Tennis: Another sport that has been done before, tennis at least feels as though it takes advantage of the technological advancements the Kinect has made. There’s more control over how you hit, and there is even a feeling of impact when striking the ball. It can still present problems here and there when timing your swings, but it’s solid.

Unique to Rivals is an actual story mode in which different factions (Viper, Wolf, Eagle) will court you to join their team. It’s initially kind of endearing with its silliness, but that doesn’t last as the characters quickly become more irritating than anything else. Thankfully, you’re free to pretty much bypass it and focus on the randomly generated events.

Multiplayer is available both locally and online, though you can only play directly against people on your friends list — the rest of the online portion consists of challenging other players’ characters. Online holds up well, while, as noted earlier, local suffers the same problems as the last generation with multiple people in front of it simultaneously and space can be an issue.

As the first real showpiece for the Xbox One’s version of the Kinect, Kinect Sports Rivals is proof that the technology has advanced, but it doesn’t offer any assurances that there’s much of a leap on the horizon.

By HC Green
Tags: Video Game Review
This entry was posted on Thursday, February 27th, 2014 at 12:58 pm and is filed under Herija Green, Video Game Reviews. You can follow any responses to this entry through the RSS 2.0 feed. Both comments and pings are currently closed.