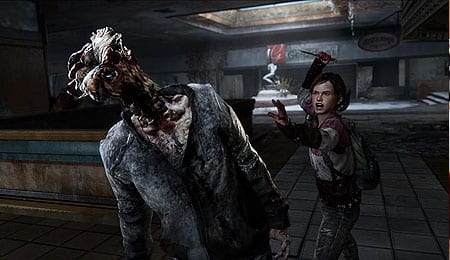 I don’t get mad. I get stabby.

Just in case you couldn’t tell by our review of the game and our Game of the Year list, we really loved The Last of Us. So much so that we played it three times and know that’s not the end of it. So naturally we were excited to spend more time with Ellie in the Left Behind downloadable content, chronicling a day of fun she has with her friend Riley in an abandoned mall.

This story is told through flashbacks as Ellie searches a mall to treat Joel’s wound between the autumn and winter sections of the game. This creates kind of a weird juxtaposition as the day with Riley is basically all story with little gameplay while Ellie’s pursuit is basically all gameplay with a minimal story approach. They even cut from one to another at random, unrelated times, with little in common to each other until Riley gives a speech at the very end. This speech came across as too little too late though, as looking for Joel’s treatment was obviously just added to provide combat; Ellie never uses a weapon while with Riley.

Both stories hold few surprises, as the player will know how each of them ends going into it. But Riley and Ellie have great chemistry, which creates some fun conversations. While we do wish there had been some more puzzles or games the two played together, we were still entertained by their conversations the entire time.

While the former favours story and the latter favours action, the time with Riley is not just walking around, and Joel’s bit isn’t all fighting. While uncommon, there are instances when Ellie and Riley play a game that will take the game’s established mechanics and give them an interesting twist. These bits are charming and fun enough that we will definitely be returning to this at some point just to experience them again.

Meanwhile, as Ellie explores for a first aid kit, there are plenty of obstacles that provide a decent amount of puzzles. These play out in the typical The Last of Us fashion — things start out calm and quiet, followed by the appearance of a few clickers until you’re eventually taking out an entire horde of them as well as some humans hunting you.

The game provides encounters when Ellie will fight both humans and clickers at once, which afford heretofore unseen opportunities to pit them against each other. The areas are as well designed as ever and, as usual, give a variety of approaches to combat and stealth. Those that got their fill of combat from the main game will not change their mind based on what this DLC provides, but those looking for more will come away very satisfied.

If you’re a huge fan of The Last of Us, this is a no brainer. It provides a few missing details that were only left to speculation before. While the story is predictable and strangely cut, the dialogue is as solid as ever and the gameplay offers a few nice surprises that will keep you entertained.

By Casey Curran
Tags: The Last of Us
This entry was posted on Monday, February 24th, 2014 at 3:49 pm and is filed under Casey Curran, Video Game Reviews. You can follow any responses to this entry through the RSS 2.0 feed. Both comments and pings are currently closed.