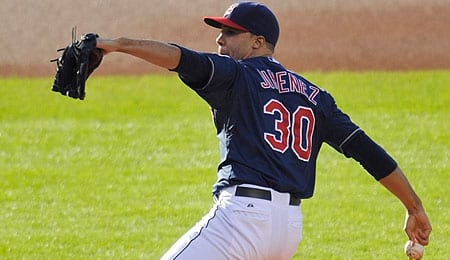 Well, if you’re like us, and own Ubaldo Jimenez in your keeper league, you were starting to get a bit antsy, weren’t you?

Thankfully, the wait for the free agent that revitalized his career last year is over as he has reportedly agreed to a four-year deal worth $50 million with the Baltimore Orioles, pending a physical.

[As an aside, we recommend that Baltimore-based parents do not run to the store to run to find “Ubaldo” bike license plates for their children. Check out the video below for more on this public service announcement.]

Most of us expected that the free agent market for starters would quickly settle itself once the Masahiro Tanaka sweepstakes were complete. But that hasn’t really unblocked things as both Jimenez and Ervin Santana — probably the two most prized free agent pitchers besides Tanaka — remained unsigned until now.

The Indians offered Jimenez a qualifying offer after the season, so Baltimore must surrender its first round pick to sign the former Rockies ace. The Orioles have a nice young rotation (with arms like Chris Tillman, Kevin Gausman and, soon, Dylan Bundy), but getting a veteran like Jimenez in there to act as an anchor was drastically needed and really adds to the overall depth of a team that last week added Korean starter Suk-Min Yoon (who now faces a tougher battle to land a rotation spot).

Just over a month ago, we slotted Jimenez 43rd in our Starting Pitcher Rankings, and we’d downgrade him slightly with the move to hitter friendly Camden Yards. Jimenez, two years removed from his last complete game, shaved over two runs off his ERA in a tremendous comeback season last year.

Just 30, Jimenez clearly has life left in his arm, although given his massive career swings, it’s hard to approach him with the utmost of confidence. His strand rate last year suggested some luck was in order, but not so much that we can see his ERA rising over 4.00. Even accounting for the move to Baltimore, the worst we can see from Jimenez this season is an ERA of around 3.95.

Now it’s your turn. Let us know in the comments below how you think Ubaldo Jimenez will fare with the Orioles.

Crave more in-depth Fantasy analysis? Then join us every Thursday at 9 p.m. EST for RotoRob’s Fantasy Baseball Weekly Podcast on Blogtalkradio.Tim McLeod and I will entertain and edify you for a half hour or more each week. Tune in here.

By RotoRob
This entry was posted on Tuesday, February 18th, 2014 at 3:14 pm and is filed under BASEBALL, MLB Today, RotoRob. You can follow any responses to this entry through the RSS 2.0 feed. You can skip to the end and leave a response. Pinging is currently not allowed.