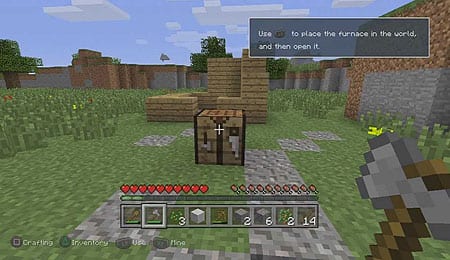 Minecraft has finally arrived for PS3 owners in all its blocky glory.

Minecraft, the wildly popular community-driven PC game, has arrived on PS3. We’re one of the few gamers who probably knew next-to-nothing about the game other than the infamous South Park episode, so we’re able to go into the newly released PS3 version with a fairly clean slate.

For the uninitiated such as myself, Minecraft is a bare-bones adventure that focuses equally on creation and exploration. The block-based graphics are eight-bit style brought to life, similar to the old PS3 adventure 3D Dot Game Heroes, though the interactions are even more streamlined than that game. Minecraft’s gameplay Crafting is done by mining materials from individual blocks in the world — just about anything can be mined (performed by holding down R2). From there, materials can be combined to create torches, pickaxes, shovels, and much more, in addition to items that further crafting such as furnaces. Players have gotten extremely creative, building anything from Star Trek’s Enterprise to a lifesize Monopoly board.

Players can focus strictly on the creation aspect of Minecraft, though there’s plenty of exploring to do. A loose campaign, called Survival mode, emphasizes exploration and collection of specific items. At nighttime, enemy creatures come out, and while combat won’t win any awards (strike and retreat), it gets the job done. This can be done as a multiplayer experience or a single adventure or a combination of both.

Online multiplayer with up to eight players is drop-in/drop-out with friend lists (but no dedicated server yet — that is supposedly coming down the line, as well as PS4/PS Vita support), and local co-op allows up to four players, so players can make plans and craft together.

You’re going to spend a lot of time in Minecraft looking at menus brought up by different buttons and one of the weak parts of the game is how the PC interface has been forced into a console controller. Menu navigation takes place through a floating cursor using the left analog stick, turning crafting and sorting into a tedious process. We imagine that the eventual PS4 port will utilize that console’s controller touchpad but for now, it’s a bit cumbersome. Considering that crafting is pretty much the central interaction of the game, that can get in the way.

Minecraft remains the ultimate community oriented sandbox experience. Because of that, it’s certainly not for everyone. The joy you get from the game is proportional to how much you’re willing to invest in personal creativity and, to some extant, community interaction. For the willing, the possibilities are nearly limitless.

By Mike Chen
Tags: Minecraft
This entry was posted on Monday, January 6th, 2014 at 3:30 pm and is filed under Mike Chen, Video Game Reviews. You can follow any responses to this entry through the RSS 2.0 feed. Both comments and pings are currently closed.