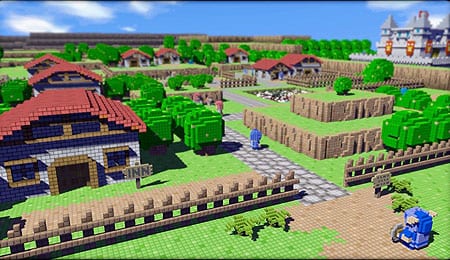 About a month ago I found myself sifting through some old papers in my parents’ garage — grade school assignments, box scores from computer baseball games and drawings of X-wings were abundant, but I didn’t come to a halt until I uncovered a stack of detailed maps that’d been drawn on a pad of Far Side stationary. I hadn’t seen them for more than a decade, but I recognized them immediately. They were the dungeons from The Legend of Zelda, a game which I still remember in vivid detail right down to the terrible rap song they used to promote it.

Given my level of affection for that game and others like it, Atlus’ recent 3D Dot Game Heroes was made for people exactly like me. It makes no bones about borrowing heavily from Zelda’s formula, but that lack of originality doesn’t stop it from being a unique experience or an absolute blast to play.

Given the throwback vibe at work here it should come as little surprise that the game offers a very streamlined control scheme. In fact, you’ll primarily use two buttons in any combat situation you encounter with X wielding your sword and the circle deploying your secondary item — such as a boomerang or a bow and arrow. You’ll also learn a dashing attack that is executed by pressing the square button. The shoulder buttons are used for cycling through items, checking out your map and using your shield to block enemy attacks.

It’s all very easy to learn, but that doesn’t mean it always works. In true old school adventure game fashion you cannot attack diagonally with your sword, though you can turn your hero while the sword is out which creates a sweeping motion that allows you to strike enemies located in that diagonal position. Still, it may take some getting used to. Moving can also be a little troublesome as you’ll find your character will get stuck on an object or slip off of something you’re trying to push. This can be particularly annoying when you’re low on health and making a mad dash for a doorway only to watch as your hero gets hung up on an edge and summarily pummeled to death.

The best way to describe the visuals in 3D Dot Game Heroes is brilliantly simplistic. The unique way they’ve taken old-school 2D graphics and updated them with everything being built out of tiny little blocks never stops being enjoyable. It gives the game an undeniable sense of whimsy and is sure to immediately draw in anyone that sees you playing it. In stark contrast to the blocky graphics is the shimmering water, which stands out and looks extremely cool. Easily my favourite aspect of the visuals, however, is the way everything you destroy bursts into a shower of tiny pixels. You’ll see it over and over again during your adventure and yet it never gets old.

One nice touch is the ability to play through the game as any number of creatures instead of the default hero, including such unusual choices as a pumpkin, vampire or gorilla. If none of those are to your liking you can create your own hero from scratch using the game’s editing tool. It’s straightforward, though you’d need to invest some time to create anything on par with the available choices.

If there’s a gripe to be found with the graphics it’s that in the default camera mode you will at times find your character completely obscured from view, which can result in taking damage. This can be remedied by switching to an overhead camera angle, but in doing so you’ll find that the graphics take a real hit and lose much of their charm in the process. I found I preferred to keep the default camera active and take the occasional hit, but it’s a choice I don’t think I should’ve had to make.

While the graphics have been updated and enhanced, the audio hasn’t been given the same treatment and instead sounds nearly identical to the classic 8- and 16-bit RPGs of yesteryear. That means catchy little tunes that loop endlessly. That repetitiveness is the reason so many gamers can still whistle the themes of Super Mario Bros. and The Legend of Zelda, but few can remember music from a game they played a month ago (Halo’s signature sounds notwithstanding). So while it’s distinctly retro and true to its roots, I didn’t find it as endearing as it used to be.

3D Dot Game Heroes casts you as the descendent of a great hero of legend. The realm of Dotnia is being threatened by an evil bishop named Fuelle, who wishes to use a Dark Orb that contains an evil power to rule the kingdom. With King Tezro unable to combat these evil forces he has called on you to aid in this hour of need as only you can seek out the six orbs of the six sages in an effort to defeat Fuelle before all is lost. If that story sounds a bit cliché, it’s because it is. However, the back story here only serves to propel you from one dungeon to the next and as a setup for clever little nods to other games.

You’ll traverse a large map with many different environments — desert, grasslands, mountains — but outside of a general “go here next” there’s little direction to be found. Again, this is in keeping with the tradition of this style of game, but like the music I question whether those that didn’t grow up on older titles will embrace a game that allows you to potentially wander around for hours.

Even on a small scale, I spent probably 30 minutes going room by room through the game’s first dungeon trying to find a key to access an area I couldn’t reach. Frustrated, I eventually checked online and discovered that the door can’t be opened until later in the game. I’m not new to this genre, either, and there were still times where I wasn’t sure where I was supposed to go, how to get there or if I’d missed something important. This is definitely one area where developer Silicon Studio could’ve thrown gamers a bone to keep things moving forward.

As you progress you’ll earn items that allow you to reach previously inaccessible areas, so while technically the entire world is open from the beginning you’ll find you need things like bombs or a grappling hook to advance. The difficulty of enemies is also a good way to gauge whether you’ve wandered too far as areas meant to be accessed later on will have tougher foes inhabiting them.

Speaking of your enemies, 3D Dot Game Heroes presents a nice mix of adversaries to strike down in very straightforward combat. You wield a gigantic screen-filling sword that can be upgraded to be stronger, shoot beams or possess other attributes. While this may sound overpowered, the game compensates by only allowing you to swing the full-powered version of your blade when your health is maxed out. Get hit just once and your sword shrinks in size and makes fending off enemies much tougher. Things become progressively harder in general as the game wears on, and the difficulty level really gets amped up down the stretch.

Beyond the primary quest you’ll also have the opportunity to complete side quests for the various inhabitants of Dotnia, which will give you access to additional items. There are also a number of optional swords to be found, a sign viewing quest that encourages exploration and even several fully functioning mini games highlighted by a fun tower defense game. So yeah, there’s definitely a lot to do.

All told you can expect to invest 20-plus hours into completing the game assuming you do some exploration, though it’ll take you considerably longer if you try to do it all. Save after defeating the final boss and you’ll open up a “New Game+” mode and access to a harder difficulty level. Within this mode exists the ability to unlock an even tougher challenge where one hit kills your character, but that’s recommended for experts and masochists only.

3D Dot Game Heroes pays brilliant homage to the RPGs of platforms past. It’s got a wonderfully unique look and approaches its source material with equal parts reverence and humour. I’m not sure how younger gamers will react to a title like this, but for anyone that grew up playing the likes of The Legend of Zelda or Dragon Quest this is a great successor worth every penny of its asking price.

By Herija Green
This entry was posted on Monday, May 24th, 2010 at 2:21 pm and is filed under Herija Green, Video Game Reviews. You can follow any responses to this entry through the RSS 2.0 feed. You can leave a response, or trackback from your own site.