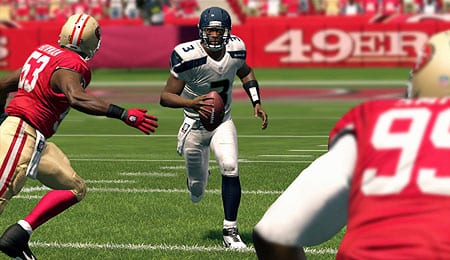 Unfortunately, the gameplay still doesn’t look anything like this.

Of the six franchises published by EA Sports in 2013, only two (FIFA and Madden) saw releases on both the current and next-gen platforms. We already took a look at FIFA on both the PS3 and PS4, and now it’s time to put Madden NFL 25 on Xbox One through its paces. With more power than ever under the hood, is this the definitive football experience we’ve been waiting for?

To read our full review of the Xbox 360 version, click here. The following will focus on differences and upgrades between the two.

Although the game largely handles the same on Xbox One, some noticeable improvements have been made, particularly in the running game. Buoyed by the new True Step system that’s built to take more factors into account for a collision than ever before, players now move and adjust more realistically. It definitely takes some getting used to — a fact that was driven home as we struggled to get Gold medals on the same in-game tutorials we breezed through on the 360 — but once you do you’ll find it’s a significantly improved process.

Blocking A.I. has also been rebuilt, and the results are quite impressive. Offensive linemen actually seem to properly identify incoming threats and respond to them, leading to the formation of the most true-to-life pocket we’ve seen in a video game. Double teams make sense, and it’s pretty impressive to see both sides of the line of scrimmage make reasonable adjustments on the fly. Neither this nor the running game have achieved perfection, but they’re both steps in the right direction that detail-oriented sports gamers will appreciate.

Also worth noting is the introduction of the “Player Sense” system. Essentially, the power of next gen allows the players in Madden NFL 25 to make moment-to-moment adjustments and react to what’s happening on the field. Nowhere is this more noticeable than in the secondary, where both man and zone coverage have been greatly aided by better synergy between cornerbacks and safeties — to whit, it’s definitely tougher to beat defenses deep consistently.

If you watched any of the next-gen trailers you were like impressed by the visuals but skeptical the game was capable of making such a quantum leap. You were right to be skeptical as improvements in the graphics are modest when actually playing the game. The sidelines are more lively, and the crowd is somewhat improved as they’ll respond to plays as they take place — for instance, they may get to their feet on a deep throw — but it’s nothing earth shattering. We certainly hope things take another significant step forward when Madden ’15 rolls around.

Commentary has received some attention, too. It’s uneven, though, with Phil Simms and Jim Nantz delivering intelligent insight one minute and spewing out borderline nonsense the next. This is another area that should benefit greatly from another year of development on the new systems as this still isn’t up to what we’ve seen in other, current-gen sports titles.

While there’s only a small fraction of players on Xbox One compared to the 360, once we got into a game we found the performance exceeded its predecessor. We never encountered any perceptible lag, and the presence of a working accelerated clock is great for those that plan on playing entire seasons online.

Is Madden NFL 25 a better game on next gen than it is on the current one? Yes. Is it the jaw-dropping recreation some of EA’s sizzle trailers may have led you to believe it would be? No. If you’re a fan, though, and have the chance to upgrade to the Xbox One or PlayStation 4 for US$10 it’s totally worth it.

By Herija Green
This entry was posted on Friday, December 6th, 2013 at 4:47 am and is filed under FOOTBALL, Herija Green, Video Game Reviews. You can follow any responses to this entry through the RSS 2.0 feed. You can skip to the end and leave a response. Pinging is currently not allowed.