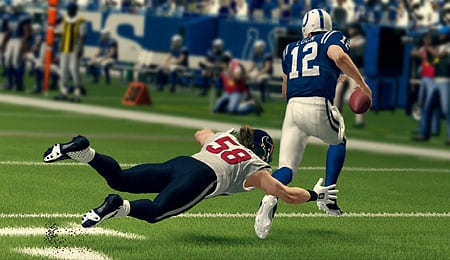 Looks like Luck is running the (Brooks) Reed option.

Twenty-five years is a long time. Back then a young Bruce Willis wowed audiences in Die Hard, The Cosby Show held court atop the Nielsens, George H. Bush was elected the 41st President of the United States, and a little game called John Madden Football was released for the first time. Clearly, a lot has changed for the franchise from humble beginnings to its current spot as one of gaming’s institutions. So does Madden NFL 25 celebrate its silver anniversary in style? Let’s find out.

As you’d suspect, Madden features the same overhauled read option mechanic seen earlier this year in NCAA Football ’14. It’s identical in its execution, which is just fine because I thought it was handled very well, and anyone that didn’t pick up the college game should enjoy its inclusion. Passing, revamped a year ago with “total control,” returns pretty much untouched. There are still times when a receiver will dip behind defenders rather than crossing in front, which can lead to frustrating picks, but for the most part the ability to throw to a spot works as intended.

Running with the ball (whether on a handoff or after a completed pass) has gotten the yeoman’s share of the attention this year with the “Run Free” system and its accompanying precision modifier. This is activated by holding down the left trigger, slowing your ball carrier’s gait to ready him for a bevy of new, more advanced moves. The names are the same — dive, spin, stiff arm, etc. — but their execution and effectiveness when using the modifier have changed.

For example, pressing “A” will deploy the usual stiff arm to ward off a pursuing defender. Hold down the left trigger and then hit the button, however, and you’ll execute more of a violent punch designed to put a would-be tackler in the dirt. Hurdling feels more important than in years past as well, as it seems easier to get tripped up in the trash along the line of scrimmage. If you do get knocked off kilter, the new stumble recovery system allows you to fall forward for extra yardage or attempt to regain your balance and keep on going with a flick of the right stick.

Kinect support returns, though once again it only feels like a viable alternative on offense in which you’ve got ample time to make adjustments. On defense, when the ball can be snapped at any time, it doesn’t seem possible to make more than one or two quick changes.

With a year to polish up the Infinity Engine, Madden NFL 25 does an even better job of implementing on-field physics. There are plenty of instances you’ll want to check out replays to see a particularly slick looking cut or devastating hit. In fact, one could make the case that there are too many huge hits as players seem to get tuned up multiple times per game. It’s better than last year (and much better that pre-canned animations), but there’s still work to be done to weed out some of the awkward moments when limbs contort in career-ending directions.

Little has been done with the presentation, and it’s one of the areas, along with sidelines and crowds, that I’m hopeful the move to next-gen systems will improve significantly. There is at least one positive change on the front end as a Windows-inspired “tiles” layout neatly compartmentalizes all your assorted tasks and options. Still, I’d like to see some bells and whistles a la the NBA 2k franchise that create more of a broadcast atmosphere.

Jim Nance and Phil Simms return on commentary, and I’m sorry to report that they’ve run afoul of the dreaded sophomore slump. Much of the banter that came across as semi-organic last year feels more forced and less relevant this time around. It’s also unclear how much additional dialogue was recorded. Obviously when they reference offseason changes — like Gus Bradley taking over in Jacksonville — it’s new, but hearing Simms praise Jordy Nelson, who missed much of last year, in a nod to Fantasy football, or discuss the late Al Davis’ obsession with fast players sounds outdated.

Connected Careers is once again the primary single-player entity in Madden, allowing you to guide a created (or real life) player, coach or owner through the NFL. As a player this consists of practicing and playing games, which earn you experience that is used to upgrade your ratings. Coaches get to call plays, oversee personnel decisions, handle the NFL draft and more. Again you’ll earn experience to improve your coach as well as develop players.

New this year is the owner mode. It incorporates all the on-field tasks of the coach and adds a bunch of unique options as well. Here you can adjust prices on concessions/tickets, upgrade facilities, hire/fire staff or even relocate a franchise — this also allows you to rebrand your team with a new name, uniform and, of course, a stadium. If you’ve been playing sports sims for any length of time odds are you’ve seen this type of micromanagement in other games. Despite not breaking any ground, it does a solid job of toeing the line between detailed and accessible.

Madden Ultimate Team (MUT) returns as well. The team-building, card-collecting mode has seen a few tweaks from last year, including the re-implementation of Chemistry. Now teams start with a captain that specializes in one of eight disciplines: four offensive and four defensive. Whichever one you choose becomes the focal point of your club, and the more players you have that adhere to this philosophy the more significant your boost will become. There’s plenty of challenges and progressively more difficult opponents to face so fans of MUT should get their money’s worth.

Of course, Madden is primarily judged on how it performs between the white lines, and the team at EA Sports has tweaked dozens of elements to improve on last year’s version. I’ve already noted the major changes in previous sections (the new Run Free system, stumble recovery and lots of new plays from the Pistol formation), but longtime players will spot other, more subtle improvements.

In conjunction with the revamped running game, blocking A.I. has improved as I consistently saw lanes open up more clearly and found cutbacks more effectively. The game also implements an avoidance mechanic that makes getting stuck on offensive linemen happen less frequently. Blocking still has some kinks, though, as blockers reaching the second level tend to just run downfield rather than finding another defender to engage… and it’s pretty frustrating to get brought down from the side while three blockers are running free five yards ahead of you.

Odds are you’ll still be able to connect on your money routes, but to credit the A.I. it often became much more difficult as the game wore on and plays were called for the third and fourth time. It also seemed like the computer didn’t tip its hand nearly as much as I found myself getting sacked more than I typically do from blitz packages. Lastly, players can actually recover from missed tackles and poor angles this year, and not in an unrealistic Tecmo Bowl sort of way, either.

It’s worth noting that, while all my gameplay was done on default settings, the all-new Madden Share feature allows for uploading and downloading of community-created content. That includes custom rosters, playbooks and, perhaps most importantly, sliders — and you just know someone is going to find that right combination to create as realistic an experience as possible.

While there aren’t a ton of high-profile additions, Madden NFL 25 is perhaps the most essential purchase for NFL fans in years because it reflects the league’s evolving fascination with the read option. So if you like keeping up with current trends and playing what you see on Sunday, this is a release you shouldn’t skip — plus it doesn’t hurt that it plays a damn good game of football.

By Herija Green
This entry was posted on Friday, August 23rd, 2013 at 1:47 pm and is filed under FOOTBALL, Herija Green, Video Game Reviews. You can follow any responses to this entry through the RSS 2.0 feed. Both comments and pings are currently closed.