The Wire Troll: Ace Sanders Takes Advantage of his Chance 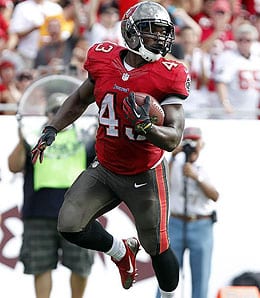 Each and every week of the NFL season some random players emerge from depth charts and make an impact. When this happens, fodder is produced for Fantasy owners to debate over. As such, we present to you The Wire Troll for Week 12.

Jason Campbell, Cleveland Browns: Why on earth would we suggest a QB who threw three INTs in a 21-point loss? Why would a big city Mayor smoke crack? Basically there doesn’t have to a good reason or explanation. Did you ever walk past a slot machine and the hair on your arm started to stand up? As far as filibusters go we hope we haven’t lost you. Campbell is a veteran talent with job security at this present time. If you are currently QB shopping, chances are you are desperate enough to look at someone on the Browns.

E.J. Manuel, Buffalo Bills: In dynasty formats, Manuel’s appeal is not glowing but after Sunday’s impressive win it might be growing. His counterpart in the Week 11 affair (Geno Smith) will always be subject to comparison, since they were drafted the same year, plus they play in the same division. Our meter however, is definitely in the Manuel zone. Rookies will frustrate you — that is a near certainty — but dynasties are not built in one year’s time.

Bobby Rainey, Tampa Bay Buccaneers: We first mentioned Rainey last month, warning that he could steal carries from Mike James. Now that James is out for the year with a broken ankle, we think that Rainey (who scored two TDs Sunday, including the one in the video below) becomes a feature back for the rest of the season. His only competition for carries comes from former Packers practice squad guy Michael Hill, who has only been with the team for a week, and Brian Leonard. We did enjoy watching Leonard share the backfield with Ray Rice at Rutgers, but he has been somewhat of a disappointment as a pro. Our view is that the only threat to Rainey’s Fantasy success is the team around him. It’s tough to expect a 2-8 team to be competitive enough every week to give 30 carries to Rainey like he got versus Atlanta, especially when Tampa Bay faces Carolina on the road and San Francisco in two of the next four weeks.

Montee Ball, Denver Broncos: After giving him no opportunities in Week Seven, Denver has started working Ball into its offense. In the last three games, he has 28 touches and three touchdowns, while fellow backup Ronnie Hillman has become a forgotten man with zero touches since Week Seven. Remember that in the Broncos’ offense, even players with limited touches have a decent chance for a touchdown, especially when they’re used in the red zone, as Ball is. When you consider that before this year Knowshon Moreno had never been the healthiest guy, and that bad weather could prohibit the weak armed Peyton Manning from throwing deep, we could see Ball possibly having some breakout games to close the season.

Marquise Goodwin, Buffalo Bills: Did you hear that? We barely saw it. To say Goodwin is fast is like saying “caution, that ham might be salty.” As the Fantasy playoffS lurk, don’t be an irrational jerk. Goodwin plays for a sub-par team, and, yes, he is lacking in experience. He also received more playing time because Stevie Johnson and Robert Woods didn’t suit up. Goodwin does possess world-class speed, much like Willie Gault did. Goodwin ran a 4.27 40-yard dash at the Combine last spring. We also know he is available in your league and guess what? — he will also be open downfield.

Michael Floyd, Arizona Cardinals: Big games like Floyd’s six receptions for 193 yards and a TD performance can make owners pounce like a mutt at a table scrap. However, sometimes that scrap is a raw onion. Hungry for more? Too bad. Floyd played the Jaguars, people, and you don’t want that smell on your breath.

Ace Sanders, Jacksonville Jaguars: On a day that saw Cecil Shorts and Mike Brown combine for five receptions for 46 yards, Sanders skimmed a cool eight receptions for 61 yards. Sanders did so on 10 targets, and most of those came after Brown left with an injury. The 5’7″ Sanders had 16 career catches before Sunday and he did so with Patrick Peterson wearing Cecil’s Shorts. Sanders is a long shot at consistent production but if Brown’s injury lingers keep your spade by Ace.

Delanie Walker, Tennessee Titans: The former 49er has played well of late with at least 50 yards and a score in three of Tennessee’s last four games. Not many tight ends rack up 10 catches in a game as Walker did in Week 11, so that much action is unlikely to repeat itself. However we do feel as though Walker has established himself as a reliable weapon in the Titans offense, and with a friendly Fantasy schedule to close the season (we feel like we’ve mentioned that before) we see him being a top 10 tight end over the next six weeks.

Garrett Graham, Houston Texans: Picked up by many following Owen Daniels’ injury, then promptly dropped during his four weeks of lackluster performance, Graham finally had the big numbers in Week 11 that people envisioned a month ago. Given that Daniels will miss at least two more weeks, and with Houston facing Jacksonville and New England (who’s been decent versus tight ends, but did give up 52 yards and a score to Greg Olsen Monday), we think Graham is definitely worth starting as a short term option, possibly longer if Daniels is unable to return in Week 14.

By Josh Johnson
Tags: Buffalo Bills
This entry was posted on Tuesday, November 19th, 2013 at 2:48 pm and is filed under FOOTBALL, Josh Johnson, Nick Wagner, The Wire Troll. You can follow any responses to this entry through the RSS 2.0 feed. Both comments and pings are currently closed.