The Wire Troll: Jordan Reed Moves Up the Depth Chart 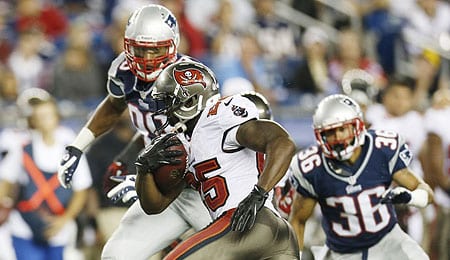 Editor’s Note: Big up to Nick Wagner, who makes his RotoRob.com debut, filling in for NFL Josh Johnson with this column.]

Each and every week of the NFL season some random players emerge from depth charts and make an impact. When this happens, fodder is produced for Fantasy owners to debate over. As such, we present to you The Wire Troll for Week Eight.

So we’ve almost reached the halfway point in the NFL season. We’ve seen some pleasant surprises like Kansas City and San Diego along with some massive disappointments like Atlanta, Houston, and the Giants. But whichever side of the fence your team lies on we now have a pretty good idea of what to expect from here on out. Savvy Fantasy owners know what defenses are primed to be exploited down the stretch run, and adjust their lineups and waiver claims accordingly.

Jake Locker, Tennessee Titans: Not only did Locker have a monster game in his return to action (against the 49ers of all teams?!), but Tennessee has one of the most favourable Fantasy schedules in the second half of the year. Who wouldn’t want to play Indianapolis twice and Jacksonville twice (including in Week 16)? Hell, they even get Oakland and Denver thrown in there. Warren Moon could come back today and be a top 15 quarterback with that schedule!

Andy Dalton, Cincinnati Bengals: How Dalton is not universally owned is as perplexing to us as why BenJarvus Green-Ellis continues to get more work than Giovani Bernard, but we digress. Hell, Dalton is nearly as good as Cam Newton (100 per cent owned), despite what Stephen A. Smith says in the video below. Dalton has the second best receiver in the league, has put up 300+ yards and three touchdowns in back-to-back weeks, and after the Bengals’ Week 12 bye, he gets to face San Diego, Indianapolis, Pittsburgh and Minnesota. Buy him now for the late push, and don’t get discouraged if he has a rough stretch against tougher defenses the next four weeks — he will rebound and win a few championships for quarterback rotators this December.

Roy Helu, Washington Redskins: We actually had Helu tabbed for recommendation before Sunday’s three-touchdown outing. Skins fan like us get treated weekly to seeing a defense so bad that Josh McCown has no problem hanging up 40+ points on them. If McCown can do that, what will Peyton Manning do in Week Eight? Laugh all you want, but an angry Denver squad could have 40 points by halftime. Since Alfred Morris is virtually non-existent in the passing game, Helu could end up seeing three quarters of feature back work this weekend. If Morris was ever hurt, Helu would be a top 10 back, he’s already got a role as a third down back, and apparently he’s also a TD vulture now. That makes Helu a good flex option in Week Eight, and if the vulturing continues, he could be sneaky good the rest of the way.

Mike James, Tampa Bay Buccaneers: Because of Doug Martin’s injury, James is the hot running back pickup of the week. The 5’10”, 223-pound rookie — the Bucs’ sixth rounder out of Miami — could possibly be in line for a lot of carries in the next few weeks. He’s definitely worth a roster spot, but we’d be very hesitant to start James right away. Not only is he walking into a very unfavourable situation that Martin (a vastly more talented player) struggled in, but we could see a running back by committee situation unfolding between James and recent addition Bobby Rainey, picked up off waivers from Cleveland. Buyer beware on this one.

Kendall Wright, Tennessee Titans: Chances are guys like Terrance Williams and Harry Douglas already got snatched up in your league (if not, what the hell are you waiting for?), but there should still be guys available that can help. Take Wright for instance. He’s accumulated eight+ targets every game in the last month, hasn’t scored less than five points in a game since Week One (gotta love a high floor when you’re digging deep!), has a healthy Locker back, and — as we mentioned above — Tennessee has a great second half schedule. If you’re sick of getting burned by “boom or bust” bye week replacements and want someone you know will at least get you a handful of points, then pick Wright up.

Darrius Heyward-Bey, Indianapolis Colts: The former Raider first round bust is now starting in Indy due to the unfortunate end to Reggie Wayne’s season. Is DHB a great player? No. And he probably never will be. But as a starting wideout on a team with a quality quarterback that struggles to run the ball, you have to figure the numbers will come (although we do think T.Y. Hilton will be the biggest beneficiary of the extra targets). It’s been a pretty good year for Heyward-Bey. Not only is he a starter on a contending team for the first time in his career, but after the Trent Richardson trade he’s no longer the biggest first round bust in the locker room!

Jordan Reed, Washington Redskins: Homer alert! Two Redskins in one column! Not only has Reed surpassed Fred Davis (who was healthy but inactive Sunday) on the depth chart, but because of Washington’s underwhelming receivers after Pierre Garcon, Reed is now Robert Griffin III’s unquestioned number two target moving forward. In the two weeks since the bye (when the Skins’ offense finally started to click), Reed has 13 catches for 192 yards and a score. Now that Griffin is keeping defenses honest with his legs things should start to open up down field more often for Garcon, Reed and maybe even Leonard Hankerson. There’s a good chance Reed is a top eight, possibly even top five tight end from here on out.

By Nick Wagner
This entry was posted on Tuesday, October 22nd, 2013 at 4:11 pm and is filed under FOOTBALL, Nick Wagner, The Wire Troll. You can follow any responses to this entry through the RSS 2.0 feed. Both comments and pings are currently closed.