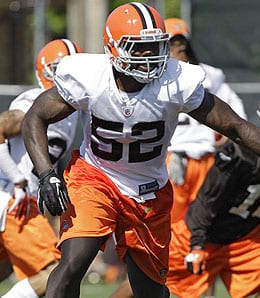 Through Week Five, the Cleveland Browns were 3-2, courtesy of a three-game winning streak. Could they have been headed back to the playoffs for the first time in over a decade (and for only the second time since returning to Cleveland after the first incarnation bolted to B-More)? Um, not so fast.

After Sunday’s 41-20 shellacking at the hands of division and state rival Cincinnati, the Browns have now dropped four of their past five games to find themselves down to 12th in the conference. There is still hope, especially with the two next games at home, but it’s fading with each loss.

The Browns have been asking for a handout from the government to help pay for proposed stadium improvement costs, and that’s been an issue for many local residents.

But at this point, the product on the field is what needs beefing up.

Sunday marked the Browns’ chance of coming up big in a big game. With a win, they would have evened their record and moved within a game of the division lead. Instead, they proved they still have a long way to go. Of course, blowing a 13-0 lead by surrendering 31 points in one quarter will do that.

Let’s look at some individual performances that have caught our eye for one reason or another.

Now it’s your turn. Let us know in the comments below whether you think the Browns still have a chance to turn things around and make the playoffs this season.

By RotoRob
Tags: Cleveland Browns
This entry was posted on Monday, November 18th, 2013 at 3:37 pm and is filed under FOOTBALL, RotoRob, Team report. You can follow any responses to this entry through the RSS 2.0 feed. Both comments and pings are currently closed.