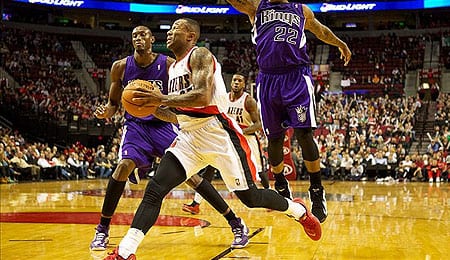 Mo Williams is getting it done off the Blazer bench. (Jaime Valdez-USA Today Sports)

Welcome to another week of the NBA Wire Troll, our weekly waiver wire recommendations of players that are available in 50 per cent of leagues or more.

This week, Mario Chalmers earned himself a one-game suspension (which he’ll serve Saturday) for his flagrant foul against Dirk Nowitzki; Roy Hibbert threw a block party as the Pacers remained perfect; and Dwyane Wade had a career-best eight steals as Miami kept pace with Indy.

And now to this week’s picks.

Mo Williams, PG/SG, Portland Trail Blazers: The Blazers are off to a hot 7-2 start thanks to a much improved bench this season. The key reserve has been the veteran Williams, who has played impressively at both guard positions. Averaging 30-plus minutes in the last three games, he has registered 15.7 points, five assists and almost two steals per game. Williams’ 18-point, eight-dime effort Friday was the key to Portland’s win. We know that as a starter, he’d hit the occasional huge shot (see video below); perhaps even coming off the bench behind budding star Damian Lillard, Mo can reach bag into his back of tricks?

Steve Blake, PG, Los Angeles Lakers: With Steve Nash (back) sidelined indefinitely, Blake has made the most of his opportunity to start. The former Maryland point guard has averaged 12.2 points, 9.4 assists, one steal and 2.2 treys over his last five games. With the fragile and uncertain future of Nash (and as long as Kobe Bryant remains out) Blake is a nice pickup for those in need of assists and threes. Note that Blake went over 50 per cent ownership in ESPN leagues after our press deadline, so you better get on this fast.

Rodney Stuckey, PG/SG, Detroit Pistons: Stuckey is in the process of becoming the major recipient of minutes at the shooting guard position for the Pistons. Aging Chauncey Billups and rookie Kentavious Caldwell-Pope have been largely ineffective, leaving Stuckey as the main option, even as he’s now coming off the bench behind the rook. Over the last four outings, Stuckey has scored 13.3 points with three assists and one steal per game, but it’s the PT that sticks out for Stuck: 30 minutes on Friday and 34 on Monday. He’ll produce given that kind of opportunity.

Jared Sullinger, PF, Boston Celtics: The highly regarded prospect from Ohio State is showing marked improvement in his second NBA season as he becomes a force in the paint. Sullinger is shooting an impressive .526 from the floor and .864 from the charity stripe. In his last three games, he has registered 17.3 points per game including 26 on Friday against Portland – a great sign after he had missed the previous game with a knee injury. Sprinkle in seven rebounds per contest over this stretch and you have a productive Fantasy power forward.

Jordan Hill, PF/C, Los Angeles Lakers: Hill was elevated to the starting power forward position by Coach Mike D’Antoni this week and the results have been remarkable. The fourth-year player from Arizona has averaged 17 points, 10 rebounds and over two blocks in his past three games, although he came down to earth somewhat Friday after two massive efforts. Hill has also improved his free throw shooting, making 15 of his last 17 attempts. We like the PT – at least 26 minutes in three straight – and we love the blocks, three in each of the past two games.

Terrence Jones, SF/PF, Houston Rockets: The “Twin Tower” experiment of Omer Asik and Dwight Howard doesn’t appear to be working, so Coach Kevin McHale inserted Jones into the starting lineup at power forward. While Jones has yet to display a proficient scoring touch, his rebounding (nearly 10 per game this week) and blocks (over two per game this week) can be useful. If Jones keeps seeing over 30 MPG and his shot actually starts falling, he can really be a valuable asset. The sophomore out of Kentucky seems to be a better match than Asik playing alongside Superman.

J.J. Hickson, C/PF, Denver Nuggets: With JaVale McGee (leg) sidelined indefinitely, Hickson and Kenneth Faried should flourish in the Mile High City. Hickson is averaging 11 points, nine-plus boards, one block and one steal per contest in the three starts he’s made since McGee’s injury.

Robin Lopez, C, Portland Trail Blazers: A change of scenery from Phoenix to Portland appears to have done the trick for Lopez. Over his last four games, Brook’s baby bro has registered 11 points and 11 rebounds per contest. Robin has hit double digits in rebounds in every one of those games, so if you need help on the glass, give him a long look.

DeJuan Blair, C/PF, Dallas Mavericks: Early last season, Blair was starting for the Spurs, but not seeing much PT. He was soon relegated the bench and wound up suffering through his worst season. Well, he’s back in a big way in Big D, pulling down major boards in limited minutes (he ranks seventh in the NBA with 17.5 boards per 48). Friday, Blair played 27 minutes off the pine and for the fourth straight game he flirted with a double-double while adding five assists, three steals and two blocks. This is a fine off-the-radar pickup while he’s performing at a high level.

Now it’s your turn. Let us know in the comments below who your favourite Fantasy basketball waiver wire add of the week is.

By Bob Raymond
Tags: Dirk Nowitzki, Mario Chalmers
This entry was posted on Saturday, November 16th, 2013 at 4:19 pm and is filed under BASKETBALL, Bob Raymond, The Wire Troll. You can follow any responses to this entry through the RSS 2.0 feed. Both comments and pings are currently closed.