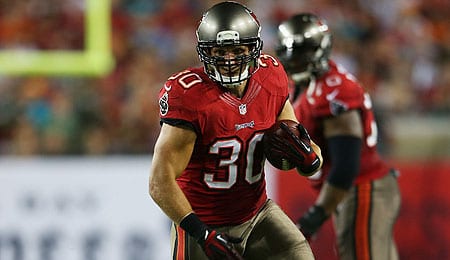 Go ahead and start Brian Leonard against the woeful Falcons. (Bleacherreport.com)

Now, before you belly up to that plate of Buffalo wings, let us have a moment of silence for all of your league’s bottom dwellers. You know the guys with the 2-8 record that only go through the trouble of filling out their lineups just to not look like poor sports. Now, the guys we are looking out for are the clingers, those guys sitting at .500 that you just can’t seem to shake loose. Well, here are some moves that might help you create some space. Here your Week 11 Start ’em or Sit ’em picks.

Brian Leonard, RB, Tampa Bay Bucs vs. ATL: Long story short, Leonard is playing Atlanta at home. We say let’s ride the disaster that is the Atlanta Falcons until it breaks. Besides, who doesn’t want “Leaping Leonard” on their team (see video below for his college go-to move)? Start ’em!

Antonio Brown, WR, Pittsburgh Steelers vs. DET: Since the loss of the irreplaceable Maurkice Pouncey, Steelers QB Ben Roethlisberger has been under constant duress, leaving him very little time to go through his progressions. However, with Brown coming off 11 targets against the Buffalo Bills, we think we know Big Ben’s first option is. Throw in the fact that the Detroit Lions are not very good against opposing wide receivers, and we feel pretty good about this start.

Larry Fitzgerald, WR, Arizona Cardinals @JAC: We don’t know how Carson Palmer has lived such a charmed QB life, but he seems to always avoid the crosshairs of critics in terms of his team’s lack of success (15 INTs to 12 TDs), and that has got to drive (always open even when he’s not open) Fitzgerald crazy considering he has done more with lesser quarterbacks. So, if Fitzgerald doesn’t get the ball early and often against the lowly Jaguars, will that be the straw that breaks Mr. Nice Guy’s back, sending him into a WR diva tirade? We doubt it, but tell us you wouldn’t love to see Fitz flip a gatorade table? This should be Fitzgerald’s break out game, so start ’em and feel good about it.

Percy Harvin, WR, Seattle Seahawks vs. MIN: We normally wouldn’t advise going with a player fresh of an injury, but Harvin has Pete Carroll for a coach, and there are two things you are sure to learn in the college ranks — how to build up a guy’s confidence and of course how to stick it to the other guy — and Coach Carroll can accomplish both by unleashing Harvin all over Harvin’s former team. The Minnesota Vikings aren’t very good this year to begin with and they will be playing in a stadium that should be renamed the Terrordome, so, they’re gonna have their hands full trying not to have their ear drums explode much less stick to any game plan they have for stopping Harvin.

Jason Campbell, QB, Cleveland Browns @CIN: This is our stretch start for Week 11, one to pull the trigger on if you don’t have a premier QB that’s healthy or available. Campbell has probably had the opposite experience as say, Palmer has, in that he has gotten maybe too much blame for his past team’s failures and is a far better quarterback than we think people give him credit for. With an MIA Geno Atkins and a banged up Bengals secondary, this is as good a time as any for Campbell to show the league what he’s got.

Greg Olsen, TE, Carolina Panthers vs. NE: Olsen, as always good old “Steady Eddy” who has been putting us some pretty solid numbers this year, but against a Bill Belichick defense solid won’t get it done, as Belichick is a wizard at taking away a QB’s favourite toys. We’re going with a sit ‘em on this one.

Stevan Ridley, RB, New England Patriots @CAR: Ridley has been on a tear lately, but so have the Carolina Panthers, in large part due to their beastly defense anchored by LB Luke Kuechlym who had 11 solo tackles in Week 10. So if you have a better match up, go with it.

Danny Amendola, WR, New England Patriots @CAR: Normally we wouldn’t suggest two sits on the same team, but after Week 10, we can just see all the owners out there who thought Amendola would produce like Wes Welker looking to be proved right. Well, outside of a few flashes, that hasn’t happened and we’re thinking this Carolina D, which has been a Fantasy beast against wide receivers, is going to keep it that way.

Andy Dalton, QB, Cincinnati Bengals vs. CLE: We know it’s a little late in the game to find a solid QB replacement, so hopefully you have one already. Dalton has squandered a great opportunity to move towards joining the elite class of QBs in the NFL, and now that he’s facing one of the leagues best secondaries, who would love nothing more than to embarrass the struggling pivot, we say put him on the pine.

San Francisco 49ers defense @NO: San Francisco’s D is pretty much an auto-start, but after New Orleans coach Sean Payton has just tasted the sweet nectar that is a balanced offensive attack, we just have to believe they’re gonna stick with it and more rushing means less opportunities to turn over an already accurate Drew Brees. Couple that with the fact they’re playing at the Saints’ crib and that spells a sub par day for the ‘Niner defense.

Now it’s your turn. Let us know in the comments below which dudes you’re going to start and who you’re avoiding in Week 11.

By Vaney Hariri
Tags: Greg Olsen
This entry was posted on Friday, November 15th, 2013 at 5:21 pm and is filed under FOOTBALL, Start 'em Sit 'em, Vaney Hariri. You can follow any responses to this entry through the RSS 2.0 feed. Both comments and pings are currently closed.