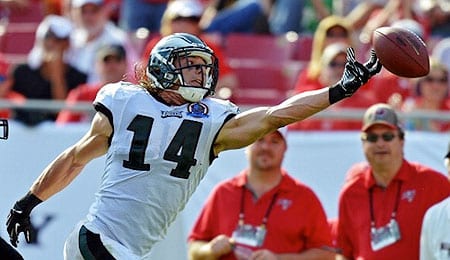 Riley Cooper is going to use both hands this weekend. (Sportsgrid.com)

[Editor’s note: This is the first RotoRob.com article for Vaney Hariri, so please join me in welcoming him to the site.]

We are now entering into the final stretch of this year’s Fantasy football season. Injuries and byes are leaving Fantasy owners with some tough decisions. So, instead of switching players over and over again until the last minute, just listen to us, so you can have someone else to blame when that guy you tripped over on the waiver wire has that “out of this world” game no one saw coming (we’re looking at you, Nick Foles). Let’s take a look at this week’s Start ’em or Sit ’em advice.

C.J. Spiller, RB, Buffalo Bills @ PIT: The Steelers’ D has been unrecognizable this year, but what better a way to get your swagger back than to feast on a rookie QB fresh off an injury? Now, if we know that, then of course the Bills know that, so expect to see a healthy dose of the two-headed monster that is Fred Jackson and Spiller to take some pressure off returning QB E.J. Manuel. Oh, and here’s betting we see Spiller perform better than he did in the video below. Yuck!

Riley Cooper, WR, Philadelphia Eagles @ GB: We don’t think anyone is under the impression that either Cooper or Foles will come anywhere close to repeating their performances from Week Nine, but if Foles is even decent and we had to pick our poison as far as the Eagles receivers, we would choose Cooper which should mean single coverage and a decent day.

Martellus Bennett, TE, Chicago Bears vs. DET: Bennett is usually good for a touchdown, and considering QB Jay Cutler has been cleared to play, we would expect Bennett to return to early season form, despite last week’s lukewarm performance.

DeAndre Hopkins, WR, Houston Texans @ ARZ: Long story short, we would call in the National Guard to help defend Andre Johnson after Week Nine, and this is a situation Hopkins should benefit from.

Danny Woodhead, RB, San Diego Chargers vs. DEN: Denver has been pretty good against the run, but not as much against the pass. Couple that with the fact that the Chargers will probably be playing from behind, and that should make Woodhead a solid flex option.

Le’Veon Bell, RB, Pittsburgh Steelers vs. BUF: Buffalo’s D is sneaky good, with a excellent front four and a rising star in LB Kiko Alonso, so don’t expect much from Mr. Bell.

Larry Fitzgerald, WR, Arizona Cardinals vs. HOU: For yet another year, Fitzgerald has been the victim of uneven QB play, and with Carson Palmer becoming a bit of a pick machine, he certainly isn’t helping Fitz make his case to stay in the elite Fantasy football receiver conversation.

Julius Thomas, TE, Denver Broncos @ SD: Ankles, hamstrings, and groins are really easy to re-injure and that always makes us nervous. On top of that, San Diego is pretty good against opposing tight ends. That said, we do expect Denver to get plenty of red zone opportunities, so Thomas may get a few key targets, but if you have another solid option go that way.

Any Packer Receiver vs. PHA: Really?

Finally, we have one bonus start for you for Week 10.

Anyone on Seattle @ ATL: The Falcons have been some kind of terrible this year. In fact if you step off the plane in Atlanta, you’re pretty much guaranteed at least 24 points. Amazingly, Atlanta is giving up 27 points per game to opponents so far this year.

Now it’s your turn. Let us know in the comments below which players you’re targeting as starts or sits in Week 10.

By Vaney Hariri
Tags: Nick Foles
This entry was posted on Friday, November 8th, 2013 at 11:56 am and is filed under FOOTBALL, Start 'em Sit 'em, Vaney Hariri. You can follow any responses to this entry through the RSS 2.0 feed. Both comments and pings are currently closed.