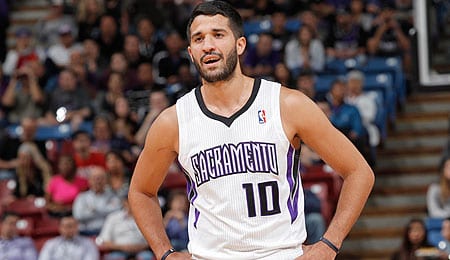 Life on the west coast may not be pleasant for Greivis Vasquez. (Rocky Widner/Getty Images)

The 2013-14 RotoRob NBA Draft continues today as we move into the home stretch with our Top 10 lists. So while you wonder how Stephen Curry is going to take the fact that the Warriors cut his younger brother Seth, let’s check out our top 10 busts. And no, this isn’t one of them, as impressive as it is nonetheless. And no, some jokes never get old.

1. Greivis Vasquez, PG, Sacramento Kings: Vasquez was dealt from New Orleans – where he was the undisputed starter (and enjoyed a career year with some sweet highlights, as evidenced in the video below) – to Sacramento, where it looks like he’ll come off the bench behind Isaiah Thomas. Vasquez will still have value, but don’t draft him expecting 35 or even 30 MPG.

2. Steve Nash, PG, Los Angeles Lakers: Nash’s first season in La La Land was simply atrocious thanks to injuries and ineffectiveness. The Lakers plan to limit his minutes, which in theory should keep him healthier, but won’t help his Fantasy numbers. Point guard is as deep as we’ve ever seen, so there’s no reason for you to get stuck with Nash as your starter – or even your top backup.

3. Trey Burke, PG, Utah Jazz: Burke is in line to see big minutes this season, but first he’ll have to recover from mid-October surgery to repair a busted digit. This, combined with reports that he struggled in Summer League, suggest to us that he’ll have some challenges adjusting to the NBA.

4. Kyle Korver, SG, Atlanta Hawks: At the age of 31, Korver moved back into the starting lineup and enjoyed his best season since 2006-07. No way does he shoot this well again. Ashton Kutcher remains a very fine source of treys, but if you expect more, you’re setting yourself up for disappointment.

5. Dirk Nowitzki, PF, Dallas Mavericks: No one doubts Nowitzi’s Hall of Fame credentials, but you have to look beyond his name now and draft him for his numbers, which – while still pretty darned good – are no longer worthy of first round attention. Disco Dirk’s bucket count has been in free fall for four years. ‘Nuff said.

6. Amare Stoudemire, PF, New York Knicks: Injuries have simply decimated this once studly power forward. With word that his PT this season may max out at 20 MPG and he probably won’t play in back-to-backs, we advise you to look elsewhere.

7. Rajon Rondo, PG, Boston Celtics: We love Rondo, but everything about him spells disaster this season, from a knee woe that will keep him out until December, to a stripped-down Celtic team that will expose him offensively.

8. Deron Williams, PG, Brooklyn Nets: D-Will hurt his ankle this summer, putting him behind during training camp and that’s a concern considering he’s had trouble staying healthy for the past five seasons. Williams should be in his prime, but his game has slipped as the injuries have mounted. This is classic high risk/high reward, but we’re steering clear.

9. John Wall, PG, Washington Wizards: We keep waiting for Wall to blow up, but in two of this three seasons, he’s dealt with extensive injury issues. He’ll get you your dimes, but may struggle with FG percentage (he sure is this fall), can’t hit threes and is occasionally prone to turnover issues. One day, Wall is going to be a stud, but we’re not convinced it will happen this season.

10. Jameer Nelson, PG, Orlando Magic: Nelson is running on borrowed time in Mickey Mouse land, as he’s either going to be traded or lose his job to rookie Victor Oladipo. Nelson is a dependable mid-tier option at PG, but on a rebuilding squad like the Magic, he’s out of place and that spells trouble for his Fantasy value.

It’s your turn. In the comments below, let us know which players you’re steering clear of this season.

By RotoRob
This entry was posted on Friday, October 25th, 2013 at 2:06 pm and is filed under 2013-14 RotoRob NBA Draft Kit, BASKETBALL, Busts, RotoRob. You can follow any responses to this entry through the RSS 2.0 feed. Both comments and pings are currently closed.