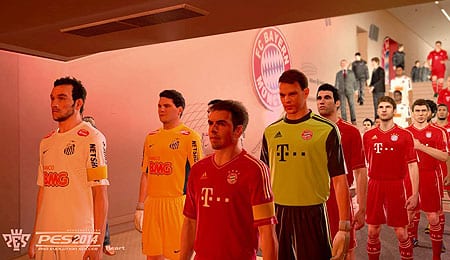 Pre-game footage looks great until framerate issues get in the way.

Konami needs all the press momentum it can get when trying to take on the juggernaut of FIFA 14, so it’s no surprise that the Pro Evolution Soccer 2014’s overhauled graphics are getting plenty of spotlight for using Hideo Kojima’s Fox Engine. Does that mean you’ll be giving long-winded conspiracy theories on the pitch while crawling underneath the rafters? Not really, but the new engine has provided PES 2014 with a lot of visual polish. Underneath it, though, are the familiar PES guts — for better or worse.

Make no bones about it: PES 2014, like its predecessor, has a very steep learning curve with the precision of a fighting game. Master it, though, and you’ll feel like you have exact control over your virtual player — a rarity in sports games. The detailed controls offer so many context- and timing-specific permutations that it feels impossible to simply list the controls here — you’d have better luck trying to explain a Tekken character’s various combos.

What I can say is that the game’s new physics engine, which focuses heavily on weight and momentum, now factors into controls. For example, one-on-one situations offer right-stick weight balance controls. This should affect how quickly you can juke or how well you can protect the ball. In theory, this is a groundbreaking idea, one that could pass down to the next generation of sports games. However, I couldn’t pull this off regularly, and I couldn’t tell if I just never got the right feel for the timing or if the necessary finesse requires too much precision to be accessible.

Issues like this underscore the challenge of PES. To really get the most out of it, you’ll need dedicated hours of uncovering the many layers of intricate controls, and that learning curve will put off fans looking for an easy entry point — it’s simple to pick up the game and play but using just basic controls seems to defeat the purpose of the game’s design. Despite plenty of trying and experience with previous iterations, I personally never achieved footy zen to smoothly bring it all together, but I could certainly appreciate the ambition of what Konami was trying to do. Fortunately, the official PES site has numerous training and tutorial videos to accompany the in-game tutorials.

The Fox Engine has done wonderful things for PES 2014, bringing new levels of detail to both players and stadiums. Animations now have a seemingly unlimited amount of combinations and they all look beautifully fluid, particularly in slow-motion replays. This goes hand in hand with the game’s new physics engine (more on that below), creating any number of uncanned and spontaneous animations.

Similarly, the facial animations have a new responsiveness. You won’t notice this until you see close ups and replays, but slow motion shows off the precision of players’ eyes and mouths reacting to the situations at hand. Combined with a revised pre-game studio presentation, and this is the best PES has ever looked — and it goes toe-to-toe with EA’s series in terms of detail.

However, while on-the-pitch animation remains fluid, I experienced fairly regular framerate issues during replays and pre-/post-game footage. As detailed as the new stadium and crowd models are, it seemed like every time the crowd got in a replay shot, the framerate stuttered. This is jarring and seems out of place considering this console generation is seven years old — things like that shouldn’t happen in a high-profile game with such regularity.

I’ve often asked for greater simplicity in sports game menus (too much whooshing tiles and flashing bells and whistles), but PES 2014 looks like it came out of a Windows 95-era game with big buttons and a floating cursor that moves with your menu selection. Seriously, a cursor. It’s an extremely minor point, but I couldn’t help but shake my head.

Where PES shines is in its core gameplay. Momentum- and weight-based physics are the big new feature to take centre stage, and the developers tried to incorporate its subtleties into controls. While PES has always played at a slower pace than FIFA, this year’s iteration feels like there’s a definite weight behind the movement. This doesn’t create a sluggish feel… it’s actually more of a grounded realism, particularly with deft-touch dribbling. The improved animation engine sells this quite well. It’s too bad that Konami’s developers didn’t have the capacity to include rain (as previously seen), as this would have definitely benefited from the new engine.

When it works, it works brilliantly, and you’ll feel like a puppetmaster pulling strings over the pitch. Unfortunately, the AI lacks consistency, and NPCs wind up making wrong decisions occasionally enough for you to not expect them, but regularly enough for you to curse the programmers. In particular, there are moments when goalies react late, leaving you scratching your head and/or screaming at the screen. Future patches may help tweak these settings so they’re not as blatant.

Heart is a new feature that attempts to affect the game through emotional momentum. This ties into the new facial animations and expressions that give you an indication of which way Heart is tipping. At the same time, the crowd’s reactions are an indicator as well. Heart provides minor boosts to momentum shifts (speed, accuracy, etc.). This affects teams and individuals, and things like free kick indicators let you know where Heart stands. Affected stats can carry over from game to game, allowing you to make management decisions based on who’s boosted and who’s slumping.

PES fans are probably tired of this fact but it still needs to be stated for general gamers: the game comes with a very limited number of licenses. Its bullet list focuses on tournaments and teams rather than all-encompassing leagues. This is important to a lot of players, so it needs to be stated. However, Konami has expressed a desire to prioritize licenses for future iterations, so maybe there’s hope for series fans.

PES has always championed being a true sim-style game, and that means that card-based modes such as FIFA’s Ultimate Team don’t really exist. Master League and Master League Online is the combination of management and on-field play, and its major iterative difference is the ability to pick from different leagues that focus on specific styles of play as well as a salary cap. Become A Legend doesn’t deviate much from before, though PES 2014 does allow you to choose a goalie as your player. League mode also returns after a one-year absence, and this allows for competition within the individual featured leagues (UEFA Champions, etc.) League mode works both offline and online.

All of the modes get the job done, but they feel fairly bare bones by modern standards. PES fans enjoy discovering the intricacies of the on-field game rather than 100 different game modes that may or may not interest them, so die-hards may not miss these types of things. However, casual fans might be surprised at the lack of depth.

Konami has taken the incredibly deep control scheme from last year and used the Fox Engine to breath life into the graphics and animation of PES 2014. There are still shortcomings, particularly in the license and online areas, but the core game remains as deep as ever — if you can get over the learning curve (add in 0.5 to the score if you’re a patient gamer or you’ve played previous PES games). The interesting part will probably come next year when Konami takes the Fox Engine where it truly belongs: the next generation.

By Mike Chen
This entry was posted on Sunday, September 29th, 2013 at 12:19 pm and is filed under Mike Chen, Video Game Reviews. You can follow any responses to this entry through the RSS 2.0 feed. Both comments and pings are currently closed.