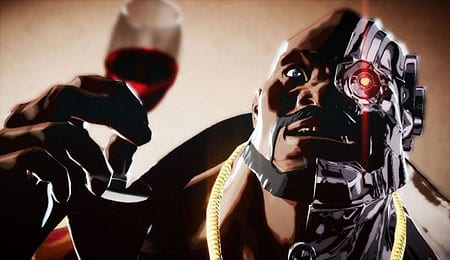 I got sick of DC, so I thought, “What if Cyborg became the new Kingpin?”

Grasshopper Manufacture is a very interesting developer. Its games often lack polish and feature shallow gameplay when compared to other games that are offering a similar experience done better. Yet thanks to its lead, Suda 51, none of this really mattered to me. He has always had a vision for something very stylish and original, which provided a unique and fun experience — until, that is, I played his newest game, Killer is Dead.

Grasshopper always has a certain clunky feel to its action games, and Killer is Dead is no exception. They are nowhere close to broken, but the controls in this game are not nearly as smooth as games like Bayonetta or Arkham City. If you have played Lollipop Chainsaw or No More Heroes, you know exactly what I am talking about. Aiming with your gun also feels overly stiff.

No, this is not the only issue. Blocking and dodging are both responsive in theory, yet remain ill equipped to handle a number of threats that appear in the game, especially bosses. Many super powerful attacks from enemies have a large enough radius that you cannot dodge them and even if you block, you to still take a small amount of damage.

Like many other games with lower budgets, Killer is Dead goes for a cel-shaded graphic style. It does so, however, in a way which is still able to look very unique. The game has a heavy use of shadows, giving everything a wonderfully dark look, which fits perfectly with the game’s tone. Wonderfully absurd character models blend in flawlessly with this as well.

The music is fantastic, consisting of some great original scores. None of them will stick in your head, but there was not a single bad or mediocre track. Sound effects lack power, yet they go in a distinctly retro-inspired direction, which makes them work.

Average is the only way I can describe the combat in Killer is Dead. No More Heroes and Lollipop Chainsaw already took the style over substance approach as far as it could, yet Killer is Dead has even less substance than those titles. The game has only one button used for sword attacks, and melee attacks serve no purpose other than to break through the enemy’s guard. This made combat just mashing a button with an occasional stun, guard or dodge involved.

Meanwhile, ranged attacks cannot blend into the combat, meaning that they are only saved for enemies that are out of range or when you are so desperate to stay alive you cannot risk being hit. The game does nothing to make ranged attacks fun, either, as your movement and enemy attack patterns are too limited for attacking to be engaging.

The story feels like No More Heroes with Killer 7’s tone. The game has you taking out killers rather than assassins, each with his or her own unique personality. Each of these had their own unique charm and a very fun cut scene showcasing their personality. Yet they were not nearly as memorable as the villains in No More Heroes.

This could be because of the very nature of the game — in No More Heroes you were stopping the best fighters in the world, so there was a lot of buildup to them. In Killer is Dead, they were just random, very strange people. The game never really bothered to explain who they were to create some buildup, which ultimately made boss fights feel less epic.

This would be fine if the story had something great to focus on, but it never really does. There are some interesting ideas for sure: the main character, Mondo, has no memory of how he got his robotic arm, and the agency he works for is run by some very unique characters I would have loved to see receiving more development.

Unfortunately, the game never really fleshes either of those elements out until much later in the game, with taking out the killers taking up the bulk of it. This ultimately makes Killer is Dead feel like something you play more for potential than actual quality. The end parts themselves are quite good, yet I could not help but feel the entire game should have been at that level.

Killer is Dead is the most disappointing kind of game. It has some very interesting ideas, and there are moments when I am in awe of how well done a cut scene is. Throughout all of this I am completely enjoying the art style and music. And yet every time I pick it up, almost immediately I want to put it back down. There’s a masterpiece somewhere inside here, but the pieces are too few and far between to ever come together.

By Casey Curran
This entry was posted on Tuesday, September 17th, 2013 at 12:49 pm and is filed under Casey Curran, Video Game Reviews. You can follow any responses to this entry through the RSS 2.0 feed. You can skip to the end and leave a response. Pinging is currently not allowed.