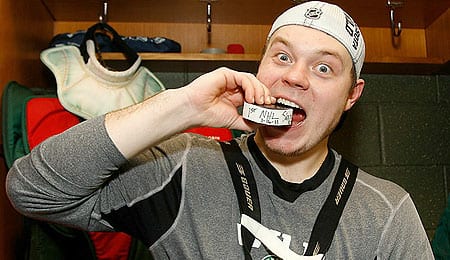 Today we continue onward with the 2013-14 RotoRob NHL Draft Kit. So while you wonder if Tim Thomas can make a successful return to the NHL with the Panthers, let’s take a look at our Fantasy hockey sleeper picks for 2013-14.

Are you ready to be ticked, shocked, and flabbergasted? Okay, let’s go, ladies and gentlemen! It is time to awaken the sleepers.

1. Anton Khudobin, G, Carolina Hurricanes: Yes, Cam Ward is the starter but he could be even worse off than last year, playing in the Metro Division. At this point, Ward really needs a better goaltending coach because the bad habits have manifested themselves to the point where it has gone too far. Khudobin is a more positionally sound goalie. Sure, things could change but do not be surprised if 20-to-25 games or more are in this “backup’s” future, and better yet, he no longer has to content with Zdeno Chara putting the puck in his own net (see video below). Stay tuned, Fantasy hockey owners!

2. Valeri Nichushkin, RW/LW, Dallas Stars: Because of some makeup concerns, Nichushkin fell to Dallas in the draft, but every time he plays, there is just something that screams sleeper here. If he curbs the selfish tendencies even a little, learns the NHL game and plays hard, then Nichushkin will have a very nice rookie season. We just think too many people brushed him off just because of that Russian stereotype. Nichuskin has the power. Now let’s see what he brings to the table for Dallas as well as Fantasy owners this coming season.

3. David Booth, LW, Vancouver Canucks: Booth really has had a tough few seasons. Since a 60-point campaign in 2008-09, it has slid downhill for the self professed bear hunter. However, he is still only 28 so there it that whole entering the prime thing. Even though it won’t likely happen, it would be fun to see Booth paired with Henrik Sedin and Daniel Sedin. Even if Booth makes the top six, he could still produce in a John Tortorella-coached system. “Safe is death” could be back and Booth would benefit nicely.

4. Dougie Hamilton, D, Boston Bruins: The biggest problem for Hamilton in his development might be Coach Claude Julien. Hey, some coaches do not like younger players (we’re looking at you, Tyler Seguin). Hamilton did show some flashes but was passed by Torey Krug in the playoffs. The reality is Krug became more of a defensive liability as the playoffs went on. At some point, Hamilton has to be unleashed. The kid has talent and has to learn from his mistakes at some juncture. Hamilton could be line for a nice offensive jump.

5. Devin Setoguchi, RW, Winnipeg Jets: Well, it did not work out in Minnesota for Setoguchi, needless to say. Is he the 65-point player he was in his first full year in San Jose? Probably not, but he is better than a meandering 35-to-40 point forward. Setoguchi really could find a home in the top six for Winnipeg and that could be beneficial in the West as Winnipeg has a bit easier of a schedule after having to compete in the East last season. Fifty points would be a pleasant surprise and is distinctly possible.

6. Mikael Granlund, RW, Minnesota Wild: It could not have gone worse for Granlund last season. He simply never really looked comfortable in the shortened campaign. Granlund went to work in the summer building leg and upper body strength and this could provide a huge boost to his confidence. Just feeling stronger can help. Most people are not expecting much from Granlund, but there is a chance he could play in the top six at some point and that increases his upside, so keep an eye out.

7. Michael Ryder, RW, New Jersey Devils: Ryder can score 25-to-30 goals for New Jersey. There… we said it. Nobody is giving the Devils much of a chance but Ryder could benefit immensely by playing with a playmaker like Patrik Elias. All we know is a little inside knowledge never hurt anyone. Ryder could also see a nice boost in his power play points, so needless to say, we suggest you draft him late then enjoy the good tidings.

8. Brent Burns, D/RW, San Jose Sharks: Burns is a 235-pound beast on the wing. The man was born to be like Dustin Byfuglien except Burns has better hands near the net. There is one question: Can Burns do it over an 82-game schedule? We think he can. He skates well, has a pretty nice shot, and can eat minutes. There you go.

9. Brandon Pirri, C, Chicago Blackhawks: This may be Pirri’s last chance. He has shown everything he can do in the AHL, but there is nothing left to prove so Chicago will give him every chance now. The time is now! You will need to watch this situation throughout training camp to see who Pirri plays with as far as line combinations, etc. Our advice is to take a flyer on himi very late or in free agency. Hey, if he hits, he is going to get his points.

10. David Perron, LW/RW, Edmonton Oilers: In the end, Perron just needed a change of scenery from St. Louis. He goes to Edmonton where he will play more minutes and not have to play in such a defensive system. That is good news for your Fantasy bottom line. It will be interested to see in training camp if Perron meshes well on the second line and the PP2. He could be a 25-goal scorer for the Oilers and conservatively rack up 50-to-55 points.

As always, we want your input so fire away. Don’t worry. Nobody here at RotoRob.com will bite. (Okay, RotoRob probably will if he hasn’t had his coffee yet, but otherwise you’re safe.)