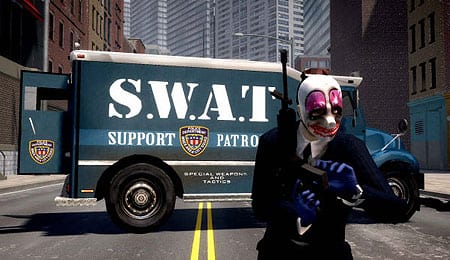 Whatever doesn’t kill you simply makes you… stranger.

I’ll admit it; I’m a sucker for a good heist flick — Heat, Ocean’s 11, Italian Job, The Score and countless others. As such I had been eagerly anticipating the arrival of Overkill Software’s PAYDAY: The Heist, which finally found its way onto the PlayStation Network a couple weeks back following a brief delay. Now the question becomes: was it worth the extra wait?

Although the layout should be instantly accessible to any worthwhile shooter fan, there is an undeniable stiffness found when aiming. Inaccurate fire is a double whammy in PAYDAY because you carry a limited amount of ammunition, which is exacerbated by minimal ammo drops from defeated enemies. Yes, you can deploy an ammo bag to reload, but doubling back to it over and over gets old. I’m someone that favours the short, controlled bursts mentality rather than “spray and pray,” but here that’s often difficult to adhere to.

On the plus side, all mission-specific and non-combat actions are mapped to a single button. That makes it easy to plant explosives, start up a drill or zip-tie a hostage in the heat of battle.

Visually, PAYDAY can be neatly divided into good (environments) and bad (animations). All six of the game’s locations are cleverly designed to keep the tension level elevated with multiple points of entry and deviating paths to many goals. It can seem overwhelming at times when you can’t determine where gunfire is coming from, but that chaos ensures you never feel completely safe. There’s also a lot of nice detail work.

On the other side of the ledger, character animations are rigid and unnatural looking. That, combined with the stiff controls, gives the game an outdated feel. Clipping is also a major issue during gameplay, and cops materialize out of thin air.

Each of the four selectable characters has limited voice work, which helps you distinguish between them but offers little else. Likewise, the sounds of gunfire and explosions don’t pack enough punch. The soundtrack is serviceable.

There is no story behind PAYDAY: The Heist. Instead, you pick between four criminals — Wolf, Hoxton, Dallas and Chains — and choose one of the game’s six scenarios. There’s a straightforward bank robbery, a diamond heist and even a prisoner extraction from a bus among the options. Each one differs in some aspects from the others, though they all share the same basic mission structure.

One of the hooks to increase replayability is that certain elements are randomized, though other than frequency and makeup of enemy spawns I didn’t notice much change. For example, on the bank level I always got the key from the manager, accessed the drill, opened the vault, wiped the security footage, melted the floor, stole the money and used explosives to create an exit.

The concept of evolving objectives is a cool one, though the game doesn’t always handle it as well as it could. Often times during a mission you’ll find yourself just sort of waiting around for something to happen with no firm timetable on when it’s actually going to. Without that feedback I would at times wonder if I needed to do something else to move on to the next item on the list while fending off the timed waves of incoming police officers.

Unfortunately, that lack of clarity is a running theme in PAYDAY. Nowhere is that more obvious than with the game’s leveling tree, which is barely introduced or explained. As you gain levels you unlock new abilities and weapons under one of three subsets (assault, sharpshooter and support). There’s a ton of stuff to acquire here, and what you unlock is determined by a selection made during missions — but you wouldn’t know that unless you were told. Considering dynamic progression is a critical element of any long-term viability the game will have, it’s a significant oversight.

Perhaps the game’s make-or-break moment for some, however, will be the porous teammate A.I. that all but makes PAYDAY a multiplayer-only experience. Obviously you cannot expect the same type of teamwork (or fun) with computer-controlled teammates, but it’d be nice if it was a feasible alternative for those times you don’t feel like coordinating with friends or randoms. Instead, your A.I. buddies will line up to be killed if you get downed — always a real possibility with the infuriating taser-wielding cop lurking — instead of killing the enemy 10 feet away that’s shooting them before trying to heal you.

Thankfully, where PAYDAY shines is when you get in a room with people that are interested in working together to tackle the hundreds of cops standing between you and freedom. In that setting you see exactly what this game is capable of being, and how in many cases the developers have slickly implemented the things that make this unique versus more traditional military-oriented shooters. It really is a very cool core concept. It’s just not always executed as well as it should be.

Despite a sometimes rough exterior, PAYDAY: The Heist can be a lot of fun. You’ve got to be a social gamer, though, that wants to work together toward a common goal. Otherwise you’re wasting your money as there’s no campaign and poor teammate A.I. make single-player heists an exercise in frustration.

By Herija Green
This entry was posted on Thursday, November 3rd, 2011 at 10:29 am and is filed under Herija Green, Video Game Reviews. You can follow any responses to this entry through the RSS 2.0 feed. You can leave a response, or trackback from your own site.