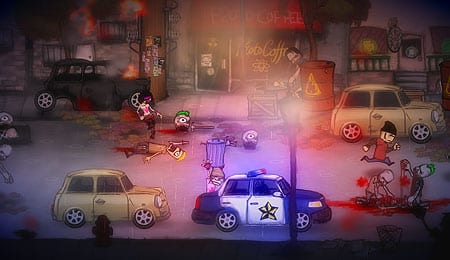 The shit has officially hit the fan.

It doesn’t take long to spot much of the inspiration behind Ska Studios’ Charlie Murder, the latest game from Dishwasher developer James Silva and second title in Xbox Live’s Summer of Arcade. My first thought was Castle Crashers, then Scott Pilgrim vs. The World, which hearkened back to the days of River City Ransom. Would such a mix of genre giants make for a damn fine brawler? Read on.

Standard brawler controls apply to much of the action with heavy/light attacks, jumps and grabs assigned to the face buttons. Blocking is done via the left trigger, and you can consume items on the fly with the bumpers. Holding down the right trigger brings up your “anar-chi” menu, with up to four powers (one for each of the face buttons) assigned at a given time. Chaining combos together is fun and satisfying, and the game’s litany of weapons to grab and use keeps things fresh.

Where Charlie Murder comes up a little short is in precision. Moving can be finicky due to an auto-sprint feature that kicks in when you go forward without interruption for a certain amount of time. The game’s 2.5D world also leads to occasions when you’re not quite lined up correctly with a narrow ledge you’re attempting to cross or an enemy you’re trying to shoot. There’s no aiming reticule or mark to fall back on, either, so if you’re off you end up wasting precious rounds.

Outside of combat, the game slickly maps functions such as assigning upgrade points and taking pictures of QR codes in the environment (that bestow items, cash, etc.) to the d-pad. Your inventory is also easy to manage, allowing you to quickly scan through clothing and healing options.

Although still grounded in the same Jhonen Vasquez, Johnny the Homicidal Maniac style as the Dishwasher titles, Charlie Murder has a cleaner, more inviting look than Ska’s predecessors. Even with all manner of decapitations, limbs being hacked off and blood splattering, the game maintains a legitimate charm thanks to the funny, exaggerated animations and character models.

Enemy diversity is a real strength as well with all manner of depraved psychopaths to put down along with plenty of completely random foes like witches, birds and giant rats. There’s a good amount of character customization available. Hats, shirts and gloves can be equipped to change your look, or they can be hidden to show off your tattoos while still gaining the associated stat bumps.

Being a game (loosely) based around a battle of bands, the soundtrack for Charlie Murder plays an important role, and it does so triumphantly. Now, there’s no doubt I grew up more hip-hop than rock, but this soundtrack still stands out. Its manic styling is in lock step with the frenetic gameplay. And yet it knows when to fade into the background and let the game’s oft-morbid atmosphere take charge.

The story (such as it is) of Charlie Murder surrounds a spurned former band member, whose own fledgling career never materialized as your group took off. Naturally, he sold his soul to become Lord Mortimer, the successful front man for Gore Quaffer, your supernatural rival. How that leads to an all-out war with a bizarre mix of everything from the satanic to the goofy is beyond me, but at least it sets up some funny flashbacks and a few Guitar Hero-inspired button pressing mini games.

Despite those rhythmic interludes and a healthy selection of other change-of-pace segments, most of your time will be spent trying to beat your foes into submission. Early on the system may seem to lack depth. As you play, however, you’ll find yourself discovering new combinations to unleash; before long you’ll be juggling enemies in the air and then sending them crashing back to the ground with a spinning piledriver. And then there are the weapons.

As robust as the variety of enemies you’ll face is, the number of weapons you can pick up and use is equally impressive. All manner of traditional firearms and clubbing instruments are available, as are a bunch of wholly unique ones such as nail guns, circular saws and severed limbs — although it would’ve been nice to have some sort of feedback in place to know when a weapon was about to break (or run out of ammo).

Much like Castle Crashers, Charlie Murder contains RPG elements as your character will level up with experience and can be boosted in four categories: strength, speed, defense and “anar-chi” (akin to magic). There are no animal orbs, but you can modify stats by equipping items of clothing. Getting tattooed unlocks additional anar-chi powers, and collecting ingredients allows you to handcraft beers for temporary buffs.

In addition to stat improvements, leveling up also allows you to learn new skills, such as the ability to dual-wield melee and ranged weapons, stomp a enemy’s skull while he’s done or rip the heart from an injured foe. Eventually all these upgrades will turn your base character into an ass kicking machine, though that still doesn’t make Charlie Murder an easy game.

Let’s be clear — you can play the game alone, but it’s much more enjoyable with a partner or three at your side. Enemies are genuinely dangerous, and the further along you go the more difficult it becomes to handle things solo (at least without copious amounts of health items). Plus, while Charlie Murder does not feature perma-death, the game’s checkpoint system stands out as its biggest flaw.

Here’s how it works. Most “levels” consist of multiple screens that allow you to progress once you’ve cleared the room of enemies. Typically there is a sub-boss at the midway point, followed by more screens of foes and then the level boss. Defeat him and you’re on to the next area. Lose, however, and it’s back to the beginning of that section. Now, any defeated sub-boss won’t re-spawn, but you’ll still need to run back through the areas, and oft times areas have been repopulated.

My eventual solution was to stock up on health items; money becomes plentiful as you advance, and although there’s a limited storage capacity I rarely found myself holding onto new items long as they’re steadily replaced by better ones. Even with a brief cooldown after consuming health I found that as long as I was willing to use them I could almost always stay alive long enough to win.

While the checkpoint system and questionable workaround hurt Charlie Murder, it still does more than enough to rate as a strong title. There are a lot of areas to explore, plenty of items to hunt and five different characters you can level up until your heart’s content.

A handful of small issues, most notably the dicey movement and archaic checkpoint system, keep Charlie Murder from becoming the undisputed beat ’em up champion on Xbox Live Arcade. Still, that doesn’t mean it’s not Ska Studios’ best game to date and a hell of a value at 800 MS Points.

By Herija Green
This entry was posted on Tuesday, August 13th, 2013 at 10:56 am and is filed under Herija Green, Video Game Reviews. You can follow any responses to this entry through the RSS 2.0 feed. Both comments and pings are currently closed.