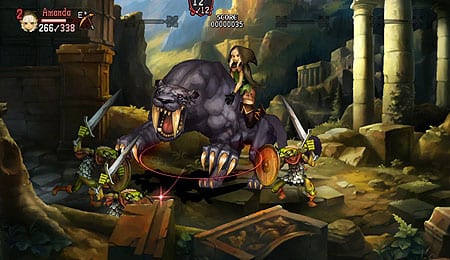 I’ve always had a certain affinity for grinding in games. I can replay the same areas over and over to level up a character and/or search for that one piece of game-changing loot. Thus it was with great interest that I dove into Atlus’ latest beat ’em up RPG, Dragon’s Crown. The PlayStation-exclusive carries a bit of controversy due to its, shall we say, chauvinistic depiction of women. Once you get beyond that, though, there’s a damn good game waiting to be played.

Simplicity is the rule in Dragon’s Crown with nearly all your attacks mapped to the square button; the lone exception is that pressing circle will unleash a powerful, class-specific attack. You can evade (right bumper) and jump (X), as well as pick up items in the environment (triangle), but this is a throwback to the days when side-scrolling beat ’em ups ruled the Earth. A time when a skillful mixing of one button and directional inputs was all that was required to save the day… or Princess… or kingdom… or whatever.

One slightly odd element is that the right analog stick is used to control an on-screen cursor, which you primarily use to direct your thieving companion to unlock doors and treasure chests. It seems more at home on the Vita (on this platform, you simply tap the screen), but it doesn’t detract.

There’s no doubt that the scantily clad, enormously-breasted elephant in the room with Vanillaware’s latest offering is its art style. Some people are going to love it, and others are going to hate it. If you fall in the second category I’m not sure there’s a convincing argument available that’ll allow you to get past that aspect of the game. It cannot be ignored. Personally, I didn’t take umbrage with it, though some of the more overtly sexual poses might’ve netted a head shake or two.

Moving past the female representation, Dragon’s Crown features some beautiful environments. Even though you’ll be trudging through a fairly limited number of locales, the care and detail with which they’ve been created is impressive nonetheless. Spell effects and attack animations look sharp, and the assorted enemies and bosses you encounter are also well conceptualized.

It looks every bit as rich and colourful on the Vita’s OLED screen, but the downsizing does come at a notable cost — with so much action happening at one time it’s very easy to lose track of your character during some of the more hectic battles. In standard fights, odds are you’ll come out relatively unscathed. In tougher boss encounters, however, that kind of thing can create real problems.

Voice acting is limited mostly to an announcer with occasional snippets of dialogue tossed in from other characters. While he does a fine job, I did get tired of hearing him repeat my current mission objective every single time I’d re-enter the central hub (yes, I know how many talismans I need). Easily the best part of the audio is the soundtrack, which nails the atmosphere of whichever area or battle you’re in at a given moment.

Although Dragon’s Crown features a passable story, it never becomes much more than an excuse to dispatch you to various locations to do some good old-fashioned dungeon crawling. Initially you’ll be restricted to using computer-controlled players, which is a mixed bag. In combat your A.I. cohorts typically hold their own. Avoiding traps and environmental damage is another matter entirely, however, and it gets a bit ridiculous to watch otherwise powerful warriors clumsily step onto spiked floors or get bombarded by incoming fire to the point of death.

Given the uneven teammate A.I., joining forces with other players is the preferred method, and once you complete the game’s first nine stages that option becomes available (though you can choose to push on with the A.I.). What also opens up is a second path through each of the nine areas, leading to a more powerful boss that drops a talisman when defeated. Collecting those unlocks the final area and a showdown with the main baddie. Defeat him and you can ascend to a higher difficulty while also raising the level cap. With multiple difficulty settings an eventual cap of 99 there’s plenty to do.

In addition, there are six unique character classes to play as, some of which make the game much easier than others, so those looking for a serious challenge can definitely find it here. As you’d suspect, the melee-based classes (fighter, dwarf and amazon) are better suited for casual players, whereas ranged characters (wizard, sorceress and elf) required a more experienced touch.

What helps make Dragon’s Crown a success, though, is that these characters aren’t simply re-skinned versions of one another. They’re legitimately different and require different tactics to succeed. This is particularly true once you start teaming up with others as finding the proper mix of skills and abilities can mean the difference between winning and losing. There’s a lot of depth hidden beneath the veneer of a simple hack ‘n’ slash, and those willing to invest the time will come to appreciate that.

Implementing the RPG genre, finding loot and leveling up are key elements here. Each trip through one of the game’s dungeons will net you four things: experience, gold, loot and piles of bones. The first two are self explanatory, and the loot system hearkens back to RPGs past as found items are identified only by their rank (from E to S), requirement (class and level) and category (sword, bow, etc.). To use your loot you’ll need to pay one of the NPCs to have it appraised, at which point all data becomes available. If you’re not interested in an item you can sell it without appraisal.

As for the bones, these are the remains of dead adventurers, and upon returning to the central town hub you can either resurrect them (again, at a cost) so that they can join your party moving forward or bury them permanently in the hopes of recouping an item or two.

Experience earned is used to level up your character, and here you’ll earn a skill point for each level you gain. These points purchase new and enhanced abilities from two card decks: one is class-specific, which is how you’ll get new attacks and skills, and the other is general upgrades like increased health or reduced cooldown times between item usages.

While constant progression in Dragon’s Crown leads to a sense of satisfaction, the game can definitely feel repetitive after a while. Enemies are constantly scaling up to present a sustained challenge, and that means there are plenty of times when you’ll need to farm for experience and items before moving ahead with the primary missions. Plus, even with a second path and various hidden rooms you will be seeing the same areas and their corresponding enemies a lot. Even for a verified grinder like me, I eventually longed for a little more variety during longer sessions.

Still, that repetitiveness is a price worth paying for the tremendous amount of content to be found here with the aforementioned multiple difficulty settings and character classes, along with a full slate of side missions that open up as you progress. If you invest in both versions you have the ability to quickly and easily upload/download save files to continue your journey.

There is no cross buy (or cross play), though, so you’d need to pony up twice (US$50 for the PS3 version, US$40 on Vita) for the exact same content, which is a price only the most dedicated should pay. I enjoyed it on both consoles, and actually logged more hours on the Vita, but I’d recommend purchasing it on the PS3 due primarily to the larger screen and more stable frame rate.

Assuming you’re not turned off by the art style, Dragon’s Crown is a great beat ’em up with beautiful graphics, loads of content and some highly memorable boss fights.

By Herija Green
Tags: Atlus
This entry was posted on Monday, August 12th, 2013 at 10:10 am and is filed under Herija Green, Video Game Reviews. You can follow any responses to this entry through the RSS 2.0 feed. Both comments and pings are currently closed.