Squeeze Play: Halle Berry About to Pump Out Another Pup 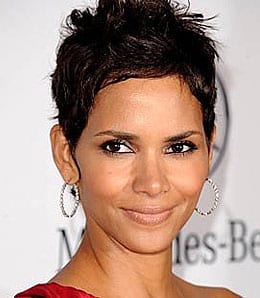 David Justice’s ex is going to have another kid at age 46.

It’s been about two and a half years since we last trotted out Squeeze Play, our column about athletes that are bumping uglies with celebrities, and that’s just plain wrong (the fact that we’ve been so tardy, not the idea that athletes get to do the mommy and daddy dance with hot celebs).

But news that actress Halle Berry, a.k.a the former Mrs. David Justice, will soon be squeezing out another pup (at the age of 46, btw… yikes!), got us thinking that it was high time to spread some gossip.

Berry has definitely had her share of lovers and husbands, but other than a three-year marriage to former Braves’ star Justice starting in 1993, she hasn’t exactly gone all ‘Elisha Cuthbert‘ on us by porking athletes right, left and centre.

Former New York Giant and current Kelly Ripa sidekick Michael Strahan is currently renting a US$20 million mansion in Beverly Hills. He and his fiancee Nicole Murphy (Eddie Murphy’s ex) recently sold their Bel Air home for US$11 million, so are reduced to renting while they seek a new house.

Poor guy, huh? Slumming it in an eight-bedroom, 10-bathroom mansion that includes a guest house. Crocodile tears are forming in my eyes as we speak.

Meanwhile, there’s been no word whether Nicole acquiesced to Michael’s demand that she sign a prenup before they got married, but the fact that they still haven’t tied the knot says something. He’s been divorced twice and apparently has finally learned a thing or two. Of course, she’s got her own stash of cash after nabbing a cool $15 million when she split with Eddie.

Tyra Banks, who once dated former NBA star Chris Webber back in the day, appeared on BET’s 106 & Park show last week, and – once again – wound up smooching host Bow Wow.

Banks was with C-Webb from 2002 to 2004, often making appearances at Warrior games. Supposedly, the two were headed towards engagement, but the relationship hit the rocks because he couldn’t keep it in his shorts.

The word on the street is he didn’t exactly discriminate on gender, either. Hey, whatever floats your boat, dude.

By RotoRob
This entry was posted on Tuesday, August 6th, 2013 at 11:53 am and is filed under BASEBALL, BASKETBALL, FOOTBALL, RotoRob, Squeeze Play. You can follow any responses to this entry through the RSS 2.0 feed. You can skip to the end and leave a response. Pinging is currently not allowed.