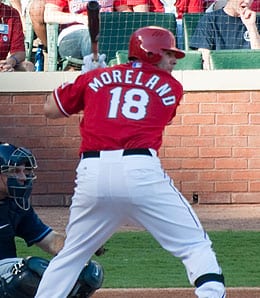 Mitch Moreland’s early-season exploits made him a great wire choice.

With the All-Star break upon us, it’s time to unveil our 2013 Wire Troll mid-season All-Star team. These gems are culled from our first half columns and represent some of the best bargains in the game. We’d take a starting rotation anchored by Patrick Corbin and Jose Fernandez off the wire and be very happy. The offense has been led by the likes of Josh Donaldson and rookie phenom Yasiel Puig. If you were chasing saves there have been few better than Edward Mujica. Those waiver wire additions and many more listed below have been instrumental in the success of many Fantasy squads in 2013.

Without further ado, it’s time to unveil our All-Star selections.

Jason Castro, Houston Astros: Castro has made huge strides this season and is more than deserving to be selected for his first appearance in the mid-summer classic. At his current pace (12 homers, 31 RBI) Castro is set to vault into the top 10 at catcher in 2014.

James Loney, Tampa Bay Rays: James Loney? What’s up with that? After a terrible season in Boston he moved his act to Tampa Bay and it was clear early on in the season (see video below for evidence) that he was a different player. Loney has enjoyed a renaissance with nine homers, 43 RBI, and an outstanding .315 BA, by far his best campaign since way back in 2007 when he teased us with his talent for the Dodgers.

D.J. LeMahieu, Colorado Rockies: Many had high hopes for Josh Rutledge this season, but LeMahieu has quietly stolen the show. The green light is on in Colorado and LeMahieu has taken advantage by swiping 11 bases in his first 181 at-bats.

Josh Donaldson, Oakland Athletics: The former Cub first rounder (2007) has enjoyed an amazing breakout campaign with 16 homers, 61 RBI, 50 runs scored, and a splendid .310 BA at the break. The 16 per cent of owners at CBS that gambled on Donaldson in March have reaped huge rewards.

Jose Iglesias, Boston Red Sox: The all-glove, no-hit label has been shed as Iglesias has simply torn the cover off the ball in the first half. Coming out of camp he definitely wasn’t part of the plan with Stephen Drew and Will Middlebrooks expected to anchor the left side of the diamond. Injuries and ineffectiveness opened the door and 66 hits in 180 at-bats later that amazing .367 BA has prompted Iglesias to be an everyday fixture in the Boston lineup.

Raul Ibanez, Seattle Mariners: What an incredible year for the 41-year-old Ibanez in his return to Seattle. Only Ted Williams and Barry Bonds hit more homers in their age 41 seasons and with 24 at the break, Ibanez is within shouting distance of The Splendid Splinter’s record of 29.

Yasiel Puig, Los Angeles Dodgers: Puig burst onto the scene with some absolutely off-the-charts numbers. He’s slowed the pace lately, but with eight homers, 19 RBI, five stolen bases, 28 runs scored and an incredible .391 BA in his first 151 at-bats, he has clearly taken the baseball world by storm. He has been a huge factor in the Dodgers getting back into the playoff race after a horrid start.

Daniel Nava, Boston Red Sox: Nava smacked 10 homers with 52 RBI and a solid .288 BA in the first half and is a huge factor in the BoSox leading the AL East race at the break.

Patrick Corbin, Arizona Diamondbacks: Heading into the season there was serious concern that Corbin would struggle to maintain his fifth slot in the D-Backs rotation. Three months later he’s not only the ace in Arizona but his 11 wins, 2.35 ERA, and 1.00 WHIP have him at the top of the leader board in all of baseball. Arizona will need an equally impressive second half out of the 23-year-old lefty if it is to maintain the top spot in the NL West.

Jose Fernandez, Miami Marlins: Many scoffed at the early promotion of the 20-year-old phenom but he continues to turn heads with the amazing start to his career. In 104 IP, Fernandez has amassed 103 strikeouts with a 2.75 ERA and 1.08 WHIP. He had a string of eight consecutive quality starts heading into the break and appears on the verge of being one of the dominant starters in the game.

John Lackey, Boston Red Sox: In the absence of Clay Buchholz (shoulder) is Lackey the acting ace of the Red Sox rotation? At the very least, Lackey has to be the top choice as the AL Comeback Player of the Year. He currently boasts seven wins to go along with a stellar 2.78 ERA and 1.14 WHIP. Even in his glory days in Anaheim he never enjoyed an ERA below 3.01.

Edward Mujica, St. Louis Cardinals: Jason Motte hit the DL and Mitchell Boggs got lit up like a Christmas tree and is subsequently demoted and eventually traded to Colorado. Mujica was given a shot to close and absolutely tore it up with 26 saves at the break, good for a tie for second in the NL with the much-more heralded Craig Kimbrel. Since inheriting the gig in mid-April, Mujica has been perhaps the most dominant closer in the game.

Francisco Rodriguez, Milwaukee Brewers: Rodriguez was rescued from the scrap heap for insurance purposes and was thrust into the closer role when Jim Henderson went down with a hamstring injury. K-Rod still hasn’t relinquished the job and his nine saves and great peripherals indicate that there is still something left in the tank.

Crave more in-depth Fantasy analysis? Then join us every Thursday at 9 p.m. EST for RotoRob’s Fantasy Baseball Weekly Podcast on Blogtalkradio. Tim McLeod and RotoRob will entertain and edify you for a half hour or more each week. We’ll be off this week (July 18), but back in action next week July 25. Tune in here.

By Tim McLeod
This entry was posted on Wednesday, July 17th, 2013 at 10:03 am and is filed under BASEBALL, The Wire Troll, Tim McLeod. You can follow any responses to this entry through the RSS 2.0 feed. You can skip to the end and leave a response. Pinging is currently not allowed.