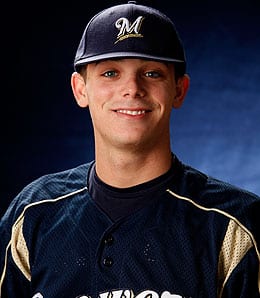 Scooter Gennett could push Rickie Weeks out of Milwaukee.

Back in a March Podcast, we openly wondered whether things could get any worse for Rickie Weeks after enduring one of his worst seasons in 2012.

Clearly, the answer is a resounding yes.

And now, in the wake of the promotion of second base prospect Scooter Gennett, we’re left to wonder if Weeks’ time is running out in Sausage City.

Weeks’ season-long slump has already sent to him to the wire in tons of leagues and news that he will now be on the weak side of a platoon at second with Gennett should expedite his dumping.

By now, you shouldn’t own Weeks in any standard sized mixed league and if this keeps up, soon he may only be good enough to be a backup in NL-only leagues.

He sat Friday and Saturday and that seemed to awaken him somewhat as he singled, walked and scored Sunday and then homered and tripled, driving in two runs on Monday. It was Weeks’ first long ball since May 15 and just his fourth of the season after pounding at least 20 jacks in each of the last three seasons.

April was bad enough for Weeks (.191/.296/.319), but at least he swiped four bags and hit a couple of dingers. May, however, was even uglier as he slugged merely .235, managing just one homer and getting caught stealing on his only attempt.

How bad has it been for Weeks this year? How about 35 hits in 54 games from a dude that stroked 175 safeties just three years ago?

Now 30, he’s at the age where it’s not uncommon to see second basemen really fall off the cliff, but this is ridiculous.

Of course, it doesn’t help that when Weeks does actually hit it well, he’s getting robbed, as you can see below.

Let’s hope Gennett’s recall and the platoon announcement is a wakeup call and that Weeks has heard it, given his huge night Monday.

So perhaps there is hope. If Weeks gets dumped in your league, keep an eye over his performance for the next week or so and consider taking a flier on him. With things falling apart in Milwaukee, there’s a good chance he gets dealt, and perhaps a change of scenery will spark a revival.

Crave more in-depth Fantasy analysis? Then join us every Thursday at 9 p.m. EST for RotoRob’s Fantasy Baseball Weekly Podcast on Blogtalkradio. Tim McLeod and RotoRob will entertain and edify you for a half hour or more each week. Next week (June 6), we’re off because of Game Four of the Western Conference Finals, but will return on June 13. Tune in here.

By RotoRob
This entry was posted on Tuesday, June 4th, 2013 at 11:05 am and is filed under BASEBALL, Player profile, RotoRob. You can follow any responses to this entry through the RSS 2.0 feed. You can skip to the end and leave a response. Pinging is currently not allowed.