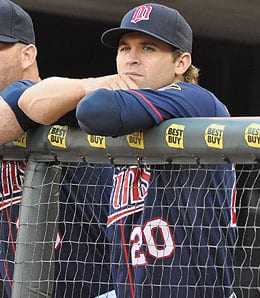 If Brian Dozier doesn’t keep hitting, he could find himself on the bench.

Heading into the season, we slotted Brian Dozier just inside the top 40 in our Shortstop Rankings. And even though he has played exclusively second base this season and has struggled to duplicate his rookie season, he’s nearly a top 30 shortstop this year.

Of course, that’s more a commentary on the sad state of the shortstop position than it is on Dozier’s emergence as anything more than deep AL-only league fodder.

He actually wasn’t completely awful in April (.295 OBP, 609 OPS in 70 at-bats), but May has mostly been unkind to Dozier (465 OPS) and he was in serious danger of losing his job altogether until showing some life this week.

Dozier singled, stole a base and scored a run Monday, followed that up with a three-hit, one-run, one-walk effort Tuesday (in which he got to bat second) and then came through with another hit and another run Wednesday.

That qualifies as a hot streak for Dozier, who has spent most of the season batting leadoff for the Twins. Reportedly, he has fixed a flaw in his swing that was prohibiting him from getting the bat head out fast enough. If it’s for real, Dozier has a chance to stick, because the Twins really need more out of the leadoff spot.

However, with Trevor Plouffe coming off the DL Wednesday (but unable to play because of his calf), Dozier’s days as a starter are in jeopardy. Jamey Carroll is currently manning the hot corner, but even if he doesn’t deserve it, he’ll need somewhere to play when Plouffe is back in the lineup.

With Pedro Florimon continuing to improve at shortstop, Dozier was shifted to second base this year after playing nothing but short last season. He’s adjusted well defensively and has arguably been the team’s top defender. Check out this video for evidence of Dozier’s prowess at the keystone corner.

But this is the major leagues, which means you’ve still got to hit your weight. The problem is that Dozier has struggled to make contact (22 per cent K rate), which is unacceptably high for someone with next to no power. His value lies in his speed (9-for-11 on the basepaths in 84 games as a rookie last year), but he’s been much less successful so far this season (5-for-9 in 39 games). Of course, it might help if Dozier were getting on base at a clip higher than .255.

Last year, Carroll’s ineptitude as a starter (no kidding, huh?) forced the Twins to give Dozier a shot at the starting shortstop gig. This year, it may be Carroll who ultimately forces Dozier to the bench.

Such is the irony of Minnesota Twins baseball and as good a reason as any why they have dropped to fourth in the AL Central, two games back of the third place Pale Hose.

Crave more in-depth Fantasy analysis? Then join us every Thursday at 9 p.m. EST for RotoRob’s Fantasy Baseball Weekly Podcast on Blogtalkradio. Tim McLeod and RotoRob will entertain and edify you for a half hour or more each week. This week, we discuss Derek Jeter’s progress. Tune in here.

By RotoRob
Tags: Brian Dozier
This entry was posted on Thursday, May 30th, 2013 at 11:04 am and is filed under BASEBALL, Player profile, RotoRob. You can follow any responses to this entry through the RSS 2.0 feed. Both comments and pings are currently closed.