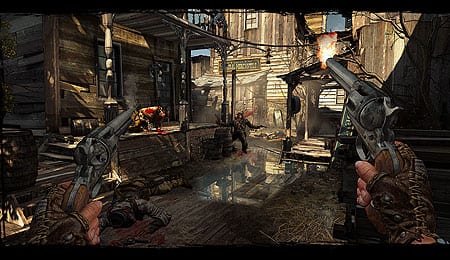 I have two guns, one of each of ya.

A couple years back, Ubisoft attempted to bring Call of Juarez into the present day with The Cartel. It wasn’t terrible, but robbed of the Wild West setting and saddled with unlikeable protagonists, it turned out to be utterly generic. Now the series is getting a reboot of a different nature with Call of Juarez: Gunslinger, which returns us to the days of Jesse James and Billy the Kid. And, in the process, proves you can move forward by going back.

Aiming and movement are both responsive — though the default settings felt loose and ended up needing adjusting — and once we got the hang of it we had little trouble pulling off those satisfying headshots. Racking up kills fills up your concentration meter, which can then be activated by tapping the right bumper. Doing this slows time and turns your enemies red — it’s loads of fun to do, and it becomes a necessary companion when the odds are stacked against you.

Beyond the gun play, things are solid with the left bumper tossing dynamite and the various face buttons handling tasks like reloading, cycling through weapons and jumping/crouching. As you unlock various skills you’ll find buttons start pulling double duty. That includes the ability to shoot sticks of dynamite out of midair and the option to mash “X” to reload faster.

Independent of the regular encounters are one-on-one duels, which control very differently. Here you’ll try to keep an ever-shrinking reticule trained on your target with the right stick while keeping your hand as close to your gun as possible with the left. Doing these things successfully increase your focus and speed, respectively. From there you can either wait for your opponent to go for his gun or draw first and lose an honour bonus. It’s fickle and feels imprecise at times, but at least it’s an interesting approach.

Cel-shaded environments and enemies give Gunslinger a Borderlands vibe that fits well with the game’s straightforward shooting. The various settings aren’t as claustrophobic as you might think, and despite its linear nature there is frequently more than one route to a destination. Mowing down lawbreakers is fun from start to finish, and the frame rate holds up.

My main gripe is that when playing through the campaign you come to rely on the game scoring your kills to confirm your foes are actually dead. When replaying levels in Recollections, however, the experience system is disabled and that feedback is gone, and without that it’s not always readily apparent if you’ve scored a kill shot or not. There’s also a lot of repetitious filler in the environments (unless turn-of-the-century America really was filled to the brim with pumpkins), though that’s a minor concession when you factor in the game’s cost.

Most of the voice acting is well done, and the method in which the story unfolds is fairly clever (more on that in a bit). That said, enemy voices during gunfights are a distraction. They seem to be originating all around you, making it basically impossible to locate threats — I can’t tell you how many times I rotated 360 degrees convinced some varmint was bearing down on me only to find nobody. The soundtrack is solid, and I really enjoyed the sound effects. Something about the way that old-fashioned revolver sounds when fired just clicked with me.

Technically, Call of Juarez: Gunslinger takes place in Abilene, Kansas, in the year 1910. It’s here that 62-year-old Silas Greaves (that’s you) saunters into a tavern and starts telling tales to the patrons about his adventures as a younger man. That the game is presented as a series of flashbacks allows the developers to have some fun with the story, altering things on the fly. This can be as simple as having a ladder descend from the sky to create a new path, all the way up to replaying an entire section after your initial memory turned out to be faulty.

Fans of pretty much any Western film released in the past 25 years should enjoy the roll call of pseudo historical references from the likes of Young Guns, Tombstone and more. Greaves’ story intertwines with all the famous lawmen and outlaws of the time, and it rewrites most of it along the way as it becomes a tale of vengeance. It’s nothing special, and odds are you’ll see the late-game swerve coming well before it happens, but grounding things in some semblance of reality was a smart move.

In regards to the action, Gunslinger covers all the basics but little more. In fact, given the production values, it’s actually the repetitious combat that most makes the game feel like a downloadable title. You fight different types of enemies, some of which require rudimentary strategy, and dispatch them with a limited selection of weapons (pistols, shotguns and rifles). Eventually you’ll face a boss that falls into one of three categories — duel, bullet sponge or Gatling gun wielder — and move on to the next section.

To help lessen the sense of déjà vu, the game has a leveling system with experience points doled out based on how effectively you dispatch enemies and string kills together. For instance, headshots offer more points than aiming centre mass, and if you pop off a few in a row the multipliers add up quickly. At each level you can unlock a new skill or beef up one you already have. There’s a lot to choose from, and it’ll take more than a single play through to get them all (a New Game+ opens up after you finish, allowing you to carry your skills forward).

Beyond the campaign, an arcade mode challenges you to post the highest score possible on one of its 10 levels. It’s fine, but minus Silas’ ramblings the action loses a little charm. There’s also a duel mode in which you can test you mettle against 15 other gunfighters. Be too slow five times, though, and it’s back to the beginning. A series of collectible “nuggets of truth” are also spread through the levels to give you the real story on the characters you’re encountering. They’re actually pretty interesting, plus they provide nice experience bonuses.

Given how much quality, and quantity, Call of Juarez: Gunslinger provides for US$15 (1,200 MS Points), it’s easy to overlook its modest shortcomings. Anyone looking for an enjoyable shooter needn’t look further.

By Herija Green
This entry was posted on Wednesday, May 29th, 2013 at 1:20 pm and is filed under Herija Green, Video Game Reviews. You can follow any responses to this entry through the RSS 2.0 feed. Both comments and pings are currently closed.