Shane Victorino Dealing With Back Woes 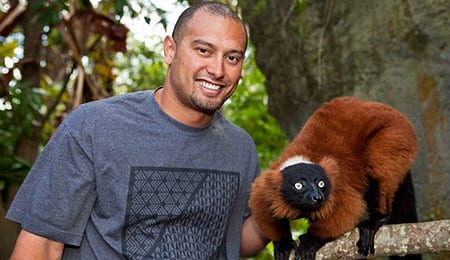 Shane Victorino never had problems with his back until he started hanging out with lemurs.

Heading into the season, we expected Shane Victorino to be among the top 40 in our 2013 Outfield Rankings, however, back woes that have limited him to 120 at-bats have made it difficult for him to live up to that billing. Through a month and a half, he’s probably been a top 65 outfielder.

Victorino’s back issue cropped up last month, causing him to miss several games and nearly landing him on the DL.

A few days after his return in May he started to heat up, recording four multi-hit efforts in a five-game span to jack his BA up to .310 as of a week ago. Included in this hot streak were Victorino’s first two dingers of the season — a great sign considering his lack of pop so far.

He continued to collect hits on the weekend, but then on Sunday he tried to understand the right field wall in Fenway in the biblical sense – at full speed. The results were not pretty:

Fortunately, a day off for the BoSox on Monday represented enough time for Victorino to shake off the results of that smackdown, which hurt his ribs more than anything (but certainly couldn’t have helped his back feel any better).

Unfortunately, he’s only gone 1-for-13 since and on Thursday, his back issue flared up again, forcing him out in the ninth inning. Victorino has never dealt with back issues before. That’s the good news. The bad news is that backs – as anyone who has dealt with such problems knows – are tricky business. They can seize up at any time, causing pretty much the rest of your body to shut down. It’s a problem several big name AL East hitters are dealing with in the early going in 2013 as both Kevin Youkilis and Jose Bautista have missed time because of their backs.

As much as he’s picked up his power game this month after a sluggish start, Victorino (who apparently loves his basketball shoes) is still struggling to put a down year in 2012 behind him. All these nicks and bruises are not helping him flash the consistent offensive game he enjoyed as a Phillie.

Coming to Fenway has not solved Victorino’s pop issues. In fact, it’s never been worse with just six extra-base knocks in 32 games. Obviously, that’s had a major impact on his productivity. Victorino has a mere 10 RBI, but just imagine how few he’d have if he weren’t batting .318 with runners on base and a whopping .360 with RISP.

Victorino’s walk rate has also continued a decline begun last year. Thankfully, a bounce back in BA has mitigated that, but his BABIP is a wee on the high side (.311), so it wouldn’t be surprising to see some regression in that regard.

The news isn’t all bad. Victorino’s wOBA has somewhat recovered this year, but Fantasy owners that were counting on his power-speed combo have to be frustrated by the mere two homers and three steals so far. That’s not what you paid for. It’s not what the BoSox shelled out for, either.

When Boston signed him to a three-year, $39-million deal in December, it was buying low, obviously believing that his ugly 2012 was an aberration. And while you’ve got to admire Victorino’s enthusiasm – he’s going to try to tough it out and play Friday – if he keeps getting banged up like this, it’s going to be extremely difficult this season for him to get back to his 2011 level of play.

Our advice: wait for Victorino to get back on a roll, ride it out for a week or two and then gauge the trade market for him.

By RotoRob
This entry was posted on Friday, May 17th, 2013 at 12:09 pm and is filed under BASEBALL, Player profile, RotoRob. You can follow any responses to this entry through the RSS 2.0 feed. Both comments and pings are currently closed.