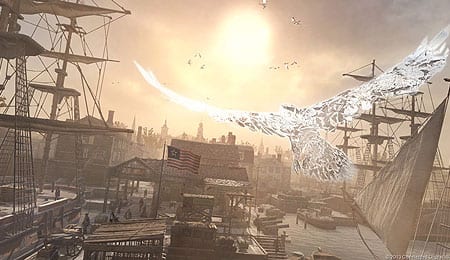 Ah, flying like an eagle. Someone should write a song about it.

As the second episode of the Assassin’s Creed III alternate world DLC, The Tyranny of King Washington, The Betrayal needed to move the story forward toward an inevitable confrontation with the villainous George Washington while still providing a satisfactory standalone arc for those that purchased the Season Pass and are playing them piecemeal. Unfortunately, it stumbles both in pacing and execution.

Picking up shortly after the last episode left off, Ratonhnhaké:ton finds himself back in Boston, where Washington, George Putnam and Benjamin Franklin are working together to terrorize the people of Beantown. The early missions here are heavily scripted and include a pair of really bizarre sections of pseudo gameplay.

First, you chug more of the special drink brewed in the first episode, which sends you back into the spirit world. This time you’re defending an eagle’s nest from a group of hungry predators. It doesn’t play well — all you need do is pass the basic QTEs found throughout ACIII when fending off wolves — and is kind of a confusing trip visually.

It spills over into an ill-conceived skirmish with Washington — one in which you can’t really hurt him, nor can he seem to hurt you as there’s not even a life meter present. Instead I just found myself cloaking to avoid or attacking with my newfound eagle powers only to see him fend off about 70 per cent of my strikes at seemingly random — there was certainly no discernible difference between successful attacks and failures.

Despite a rough introduction, the eagle power is the most interesting aspect of the DLC, though even it has issues. Essentially it offers you the ability to go from point to point much quicker than the typical running and climbing. It’s pretty cool to move about the city that way, and the built-in assassination is nice, but the aiming reticule is spotty. So rather than moving smoothly it becomes a case of scanning the horizon for vantage points you can actually select, which robs it of some fun and efficiency.

As with The Infamy, this episode is fairly short, and neither the missions nor the storyline of tracking Washington (who plays a very small role this time) are very memorable. Also, I only encountered two “feed the hungry” marks during my time with the DLC. None of the other side missions triggered, which I’m guessing was a byproduct of spending most of my time on the rooftops employing the eagle power. Whatever the case, I found no incentive to travel the streets searching for them as guards were alerted to my presence at all times.

We’re now two-thirds of the way through The Tyranny of King Washington, and while the production values are high (and new abilities fun) this hasn’t been the content-rich experience most gamers were likely looking for from such a high-priced add-on. Let’s see if the final act, perhaps aptly titled The Redemption, ups the ante and makes this a strong piece of DLC.

By Herija Green
This entry was posted on Tuesday, April 16th, 2013 at 11:15 am and is filed under Herija Green, Video Game Reviews. You can follow any responses to this entry through the RSS 2.0 feed. Both comments and pings are currently closed.