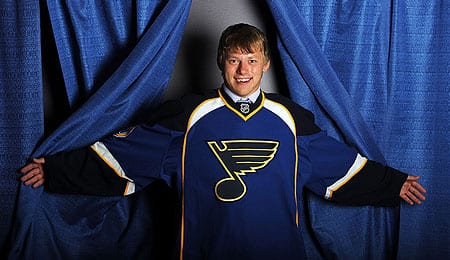 Vladimir Tarasenko will soon shed his blue velvet background and return to the ice.

One of my Fantasy hockey teams has seen more change and endured enough injuries enough for a full season. Yet, out of 16 teams, they are amazingly sixth right now. Why? There was no panic. Moves were made deliberately and a plan was put in place.

What was the plan? This is a simple case of just exploiting the structure of your Fantasy league. It is not illegal by any stretch of the imagination. Maybe there is some ethical boundary broken but no one is going to lose any sleep over it. Look at your categories, ladies and gentlemen! Figure out exactly what you are going to need to win each week and by how much as a best case scenario. Do not think about the worst case. If you want to succeed, you have to suck it up! Sorry for the emphasis, but it has to be said.

So what are we going to do for our readers this week? We will give you three players on the waiver wire that you will need. Let’s get down to business, shall we?

Vladimir Tarasenko, C, St. Louis Blues: Yes, Tarasenko has been out since the end of February with a concussion. However, he returned to action Saturday and immediately logged an assist while recording four shots on goal. Considering Tarasenko had 12 points in 17 games before the injury, it’s a good time to grab him now. At a 15-to-20 per cent ownership rate, the rookie is a solid investment and, yes, he is even waiver claim worthy if someone just waived the forward in a panic.

Andrew Cogliano, C, Anaheim Ducks: The suspension to Corey Perry will create a few additional opportunities from time to time for a player like Cogliano, who has 17 points in 27 games. Yes, Cogliano is a bit hit or miss and that 14:56 ATOI is a bit scary for some but that 20-to-25 per cent ownership rate means he amazingly is still out there. The other concern is that he has only one power play point, but on the plus side Cogliano has 44 shots on net and honestly could have 50+ if he was a little more accurate. Speed is not an issue and for little risk he could be an asset in leagues in which you need a bit of a scoring boost.

Lee Stempniak, RW, Calgary Flames: What’s the deal when a guy is only owned in 25-to-30 per cent of leagues and yet he has 20 points in 26 games? Also Stempniak gets some occasional top line time with Jarome Iginla and you know that can help a player’s bottom line. The 58 shots help too and hey he has 10 blocks for those scoring at home. The forward has potted a few points on the man advantage too. In leagues in which no one sees a near 18-minute ATOI still hanging out there, Stempniak really is worth all that and more.

Good luck next week, Fantasy hockey fans and as always you can follow me on Twitter at @ChrisWasselTHW. Get out there and make us proud. While you’re at it, leave a few comments at the bottom. Thank you for reading.

By Chris Wassel
Tags: Andrew Cogliano, Lee Stempniak, St. Louis Blues, Vladimir Tarasenko
This entry was posted on Sunday, March 17th, 2013 at 3:56 pm and is filed under Chris Wassel, HOCKEY, The Wire Troll. You can follow any responses to this entry through the RSS 2.0 feed. Both comments and pings are currently closed.