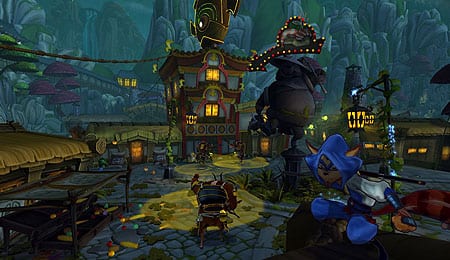 It sounds wrong to take money from his butt pouch, but it feels so right.

When Sly 3: Honor Among Thieves came out back in 2005, it seemed like a great way to end the series. Sly got to reflect on all of his ancestors’ feats in the thieving business and each character had their own happy ending. At least, until Bentley announced he was building a time machine, bringing hopes of an awesome time-traveling sequel. And although it took more than seven years to release, that adventure is finally here with Sly Cooper 4: Thieves in Time. Is it everything that we have wanted from the Cooper gang? You better believe it!

When I think of genres in which polished controls are a necessity, platformers and stealth games both come to mind immediately. Fortunately, Sly Cooper has always controlled very smoothly, and Thieves in Time only improves on it. Every character controls very well while remaining distinct from one another. The main focus, however, is on Sly and his ancestors and traversing through the game’s many locations was second nature and never gave me any problems.

There were a couple of boss battles that exposed weaknesses in the controls as they would group wires too close to accurately jump onto the right one or throw too many obstacles to deal with, but overall I had almost no issues sneaking, pickpocketing and taking out enemies. Most mini games control very well, but I did have a few minor issues with the Sixaxis ones as it is hard to grasp a perfect sense of how far I needed to tilt the controller. Still, these are infrequent and designed in a way in which they are more nitpicky than anything else.

Ni no Kuni may put every other cel-shaded game to shame nowadays, but that does not alter the fact that Thieves in Time is a very good looking game. Environments are much more detailed than their Playstation 2 counterparts, plus — thanks to some great art direction — they were an absolute joy to traverse. Each world also had its own distinct look, making them all very unique and memorable.

Sound effects have always been used well in Sly Cooper games and that continues here. They are very cartoony, adding a bit more fun to the game. Voice work is mostly well done, but I was disappointed that Murray used his Sly 3 voice, which can get annoying. Luckily, what he and every other character had to say more than made up for this, as the banter exchanged between them is very witty and funny.

The story itself is a step above your average platformer fare, offering up a fun mix of Back to the Future and Ocean’s Eleven. While there is nothing deep, the characters have well developed arcs and are very likable. Villains are delightfully despicable, with the second and third worlds’ baddies particularly noteworthy. There are a few small plot holes in the objectives to give an extra gameplay segment, but they are easy to overlook.

The thing that drew me into the series from the beginning was how ingenious incorporating stealth into a platformer is, and that setup still works well. The precision and timing necessary for a platformer fits nicely with sneaking past security guards and avoiding booby traps. It goes as far to enhance both in some ways, as tailing enemies is much more exciting when trying to jump from one rooftop to another while navigating the hub is made more interesting by the presence of guards to sneak past, pickpocket and take out with a stealthy attack. I could spend hours just taking all the guards’ gold then slamming them to the ground.

The platforming itself is very solid and challenging. It smartly focuses on timing over precision, as pressing the circle button allows Sly to land and balance onto very small platforms perfectly. However, thanks to the many obstacles and traps in my way, timing my jumps correctly would consistently present a good, fun challenge.

It also helps that all of Sly’s playable ancestors have their own unique method of platforming challenges, such as God of War-style wall climbing or jumping from one ledge to another like in Tomb Raider. These are used in the hubs, which are much larger than the PS2 Sly games, as well as more linear levels like the ones in Sly 1. The game blends these very well with standard Sly platforming, beat ’em up-style action with Murray, and a wide variety of mini games.

As someone that normally is not a fan of mini games, I have to say that Thieves in Time does an amazing job adding them to give the game variety. They’re not always just slapped onto a level; sometimes they were substantial enough to be a mission, and one instance had a variety thrown for a few seconds WarioWare-style. Most of them are done only a couple times, though a few of Bentley’s mini games for hacking computers are done more frequently. These are definitely the strongest of them, with one side-scrolling shooter that was so much fun I would pay for it as a separate PSN game.

Calling Sly Cooper: Thieves in Time one of the best platformers of this console generation is not much of a compliment as there is little competition. However, calling it one of the best platformers of all time carries a lot more weight and is just as true. Developer Sanzaru should be proud — it not only managed to capture what made the PS2 trilogy great, it also outdid all three games.

The Vita gave a very noticeable drop in graphic quality, so those expecting the game to look as gorgeous as it was on PS3 be warned. It also had more frequent slowdown, but other than that it played just as well as the PS3 version.