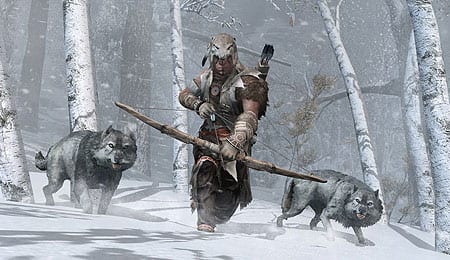 Heavily promoted by Ubisoft almost since Assassin’s Creed III was released, The Tyranny of King Washington has finally arrived… well, the first part of it has anyway. Dubbed The Infamy, the add-on begins with Ratonhnhaké:ton (formerly known as Connor) awakening to find his mother alive and the revolution having not gone as he remembered. Instead of freedom, the colonists have traded one dictator for another as George Washington has become King.

Washington, now unapologetically villainous and wielding what appears to be another artifact of the “First Civilization” (a la the apple), makes a brief but memorable appearance that leaves no doubt that the Washington seen in ACIII is long gone. Joining Washington as pillars of villainy are Benedict Arnold and Israel Putnam because a three-part series needs to have at least one antagonist per episode, right?

On the gameplay side of things there is one change of note. Stripped of his assassin’s training, Ratonhnhaké:ton consumes tea made from the bark of a giant willow, imbuing him with the ability to essentially disappear via the “wolf cloak.” It’s a reasonably fun addition with segments of the main missions tailored around using it.

The drawback, however, is that when cloaked your health bar drains at such a rate that you’re mostly constrained to moving cover to cover to avoid detection or for a handful of stealth kills. Your ability to summon assassins is also gone, replaced by the option to call forth a pack of “spirit wolves” that fulfill the same function.

Set entirely in the frontier, The Infamy offers little new visually outside of dead bodies (both human and animal) littered about familiar locations. There are plenty of high quality cut scenes, though, as the same care that was taken with the main game is evident here as well. One technical item worth mentioning: on the PS3 I did have a few instances where the game locked up temporarily when activating the cloak.

Despite the DLC’s high production values, it’s lean on content. There are only a half-dozen story missions — each with the same primary and optional objectives from ACIII — and a handful of secondary quests, such as attacking convoys to free prisoners or saving people from wolf attacks. It took me almost exactly two hours to finish the episode (and I never used fast travel), and while you can still do things like hunt or locate memory fragments those don’t feel like much of a draw to anyone that already spent numerous hours in the frontier.

It’s difficult to judge The Infamy as a standalone product because clearly it has been designed and executed as the first act of a three-act performance. The cliffhanger ending definitely has me looking forward to the next installment, but at US$9.99 (800 MSP) a piece those that haven’t already taken the plunge on a Season Pass may want to wait to see how things progress before essentially committing US$30 to the DLC’s entirety.

By Herija Green
This entry was posted on Saturday, February 23rd, 2013 at 7:10 pm and is filed under Herija Green, Video Game Reviews. You can follow any responses to this entry through the RSS 2.0 feed. Both comments and pings are currently closed.