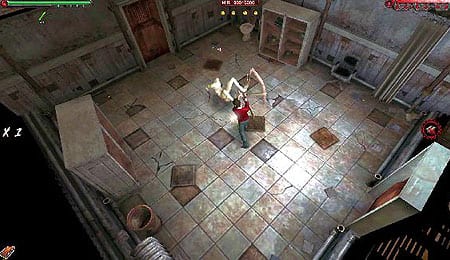 These guys can only be hurt from behind. And that’s why you should always play co-op.

First off, I need to say that I have never played a Silent Hill game before. So any Easter Eggs or notices of the game missing the point will go by unnoticed by me. I know enough of the series to figure out that this is nothing like what made it so popular, but that is as far as it will go. With that said, putting in very light survival horror elements such as breakable weapons gave what was otherwise a standard hack ‘n’ slash RPG an interesting twist on the genre.

There are two flaws that really hold the controls back. First off, dodging is way too slow compared to these enemies. You cannot react once a foe starts their attack; you have to predict when they’re going to attack and use it beforehand. Eventually you will get a sense of when they will attack, but it is hard to be certain and often forces deciding whether to get less hits in on the enemy or risk taking damage.

The other is using items on the touch screen. These icons are all in the bottom right corner and are too small for them to be accurate. I would fix my weapon when I wanted to heal, reload my gun when I wanted to switch weapons, and close the backpack when I wanted to fix my weapon. I died or took more damage than I should have far too many times because of this. Meanwhile, the d-pad is used only for communication while there were four perfectly good touch screen icons it could have used. Once again, a Vita game suffers because developers do not get to treat the screen like a nice pair of breasts: only touch under the right circumstances, otherwise you will receive some serious backlash.

Silent Hill: Book of Memories is not the game you want to use to show off your Vita’s capabilities. Character models look like a high resolution PSP game. The levels do fare better. Each one does a decent job of looking creepy and grimy, though not to the point where they create great atmosphere or make up for the low graphical power. It does not look bad — just underwhelming. This makes sense because of the overhead view, but it is still not a very good looking game.

The sound effects of enemies are wonderfully grotesque. Everything else just sounds like you would expect — nothing that makes you roll your eyes, yet nothing that gets you pumped up. I cannot even remember if there was music. Take that for what it is.

The game is structured as simple as possible: There are rooms with collectible pieces. They have enemies. You have to beat the crap out of every enemy to get the piece and advance to the next. Every level ends with a puzzle that always involves you figuring out where to place the pieces you find. Initially, it is too vague, but once you get the hang of it, it entertains for a few tries then becomes very tedious.

Levels also have a secret room to remind gamers that this is Silent Hill. These rooms try to create a spooky atmosphere and have different outcomes based on how you react to the paranormal events happening. They’re somewhat pointless and not the least bit scary, but after going through over half a dozen rooms of bashing horrific creatures, they end up providing an interesting distraction.

The feature that separates this from other dungeon crawlers is the breakable weapons. This is normally something that bothers me to no end, but there are wrenches scattered everywhere that allow you to fix the weapon when it has taken damage. Thanks to how the game not only makes these wrenches numerous, but lets you pick up as many weapons off the ground as Halo, this ends up being an interesting twist and, frankly, the only thing that separates it from every other game in the genre. That is not to say that there is anything bad with the combat, it is just that it works and nothing more beyond that one twist.

Silent Hill: Book of Memories is not as good of a dungeon crawler as Torchlight 2 or Borderlands 2. In under a year, Phantasy Star Online 2 will be out on Vita and there will really be no reason to buy Book of Memories. For now, however, it will give Vita owners a reason to keep picking up their system for the next few months. If you want an excuse to play your Vita, have friends to play co-op with, and are okay with knowing there will be no reason to play it in under a year, then this game is worth picking up.

By Casey Curran
This entry was posted on Friday, November 9th, 2012 at 1:10 pm and is filed under Casey Curran, Video Game Reviews. You can follow any responses to this entry through the RSS 2.0 feed. Both comments and pings are currently closed.