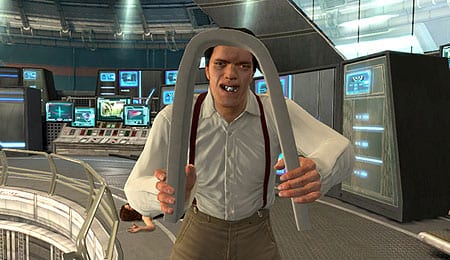 We’re smack dab in the middle of a big three-month run for England’s most famous spy with Activision’s latest release, 007 Legends, being sandwiched by the Bond 50 set on DVD/Blu-ray and the upcoming Skyfall hitting theaters. Developer Eurocom, who deftly handled the GoldenEye remake, tried to keep that momentum going here; did it succeed?

There’s no overlooking Call of Duty’s influence on 007 Legends, and that starts with controls that are practically identical. About the only unique feature to the game’s first-person elements is that the d-pad is used to activate Bond’s gadgets — a wristwatch that doubles as an EMP, a smart phone that can scan, hack and photograph items, and a pen that fires a series of non-lethal darts to incapacitate enemies. The aiming feels a little loose, which the game compensates for via an auto-lock feature.

Outside of the shooting there are a couple of rudimentary driving sequences and an odd collection of melee encounters that are part QTE (Quick Time Event), part analog boxing. While the latter is fine as the occasional change of pace, it’s overused and creates some of the least interesting boss fights you’re likely to find in a game.

It has been a while since I played through a title that had me so ambivalent toward its characters and environments as this one. The frame rate remained steady, the environments were OK, offering a mostly linear trek, and the redundant baddies made for suitable bullet sponges. However, nothing ever feels remotely engaging even as you traverse some iconic locales from the franchise.

One area where they did a nice job was in the rendering of the signature villains and Bond girls, all of whom are recognizable to the point that I spotted actors that I forgot were even in the films. This praise does come with one caveat — the character of Jinx, who was played by Halle Berry in Die Another Day, features neither Berry’s voice nor likeness.

Speaking of voices, 007 Legends wrangles up a number of the original actors to voice their parts, but that list does not include Bond himself, Daniel Craig. His fill-in is serviceable, it just seems odd that they’d shoehorn Craig’s version of 007 into every scenario yet not secure his actual voice. There also seemed to be some issues with the sound mixing as the game would be at a perfectly fine volume for action and music only to have hard-to-hear dialogue follow it.

If you’ve watched the trailer for Skyfall, you’ve seen Bond take a tumble off a moving train after being shot by another agent. That scene marks the start of 007 Legends, and as you sink into the water your mind flashes back to past events, which serves as the impetus for Bond to play through moments culled from five previous films: Goldfinger, On Her Majesty’s Secret Service, License to Kill, Die Another Day and Moonraker. A sixth mission, taken from the upcoming Skyfall, will be added in November as free DLC.

Any Bond scholars out there that did the math will realize that six actors have played 007 over the years, and not coincidentally there are six missions. This was done in conjunction with the Bond 50 release to celebrate 50 years of the series, and though each actor is summarily replaced by Craig’s likeness, they’ve each got a film represented (yes, even Timothy Dalton).

Despite such a nostalgic and reverential backdrop, 007 Legends contains none of the elements that have made James Bond a legendary figure. A lot of characters whip all kinds of ass these days, yet few of them do so with 007’s combination of nonchalance and dry wit. Bond’s charm is completely absent here, pushed aside in favour of what is in many ways a poor man’s Call of Duty. This is a first-person shooter through and through with a clumsy, pseudo-stealth element implemented to give the game some sense of espionage and subterfuge.

Not only that, but it’s criminally easy. I bypassed the default difficulty as I normally do to tackle it on Agent, and I breezed through the campaign with only a handful of “Mission Failed” screens (and even fewer deaths) in about five hours. Each level is laid out similarly as well. Mow down a bunch of henchmen, scan for fingerprints, hack some stuff and then punch out the boss in a two-part melee fight where all you need to do is follow on-screen prompts. Lather, rinse, repeat.

To be fair, the game isn’t fatally flawed by any means. The action maintains a high level throughout, and shooting down foes is generally satisfying. There’s also an experience system to purchase character and weapon upgrades, and the accompanying challenges encourage you to vary your weapon selection.

007 Legends never pushes the envelope, however, and given the depth of cinematic action from which it could have gathered source material that level of comfort with the status quo is disappointing. It’s content to be a run-of-the-mill shooter, and if you simply removed Bond’s limited gadgetry from the presentation you’d never guess it was supposed to be a 007 tribute.

Multiplayer fares better than the single-player missions; it offers fast-paced, no-frills action that boasts an undeniable old-school charm. Most of the modes fall under the “been there, done that” category, and the CoD¬-inspired leveling and unlock system is obviously familiar, but it’s still fun to jump in and play some bouts that aren’t being approached with deadly seriousness. Character movement online does a feel a bit sluggish, though.

As with last year’s GoldenEye 007 Reloaded, 007 Legends comes with a selection of bite-sized scenarios that comprise the MI6 and “Legends” Challenges. Each mission offers a lengthy list of modifiers, which can add or subtract value from the final score. The more points you score, the more stars you earn; and more stars unlock additional challenges for a total of 10 in all. They’re decent enough, but only those that want more of what they found in the campaign are likely to spend much time there.

While not necessarily a “bad” game, 007 Legends is utterly uninspired and forgettable. And given all the memorable moments the films have produced, those labels are doubly disappointing.

By Herija Green
This entry was posted on Wednesday, October 24th, 2012 at 10:39 am and is filed under Herija Green, Video Game Reviews. You can follow any responses to this entry through the RSS 2.0 feed. Responses are currently closed, but you can trackback from your own site.