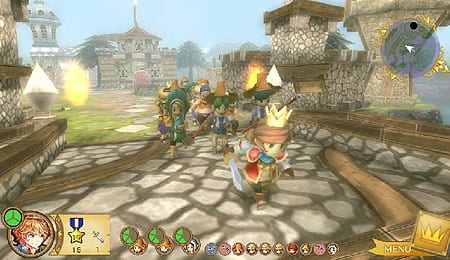 He’s a kind king who only requires you to surrender your free will.

Imagine this: you’re a carefree human, breathing fresh air and enjoying life to its fullest. Then, some asshat with a crown and a sword shows up and says, “Follow me and dig this hole, you’re my farmer now!” Normally, you’d laugh in his face, maybe hand him some change and go on with your day. But for some unexplained reason, you absolutely love this guy and are compelled against your better judgment to grab a shovel and start digging. “Anything for you, my liege,” you say, working your fingers to the bone as your free will is siphoned away, day by day, for the rest of your days.

Welcome to New Little King’s Story for the PlayStation Vita. It may look like a cutesy Japanese RPG, but inside lies a morbid real-time strategy title where society is filled with mindless automatons and you’re the androgynous iron-fisted monarch pulling the strings!

As Corobo, the littlest of little kings, you command a small band of loyal subjects who will do just about anything for your honour. As you roam the kingdom, simply press “circle” to recruit any citizen or tap them using the Vita’s touch screen. Once you assemble a royal guard, you can dispatch them one after another by targeting with the right trigger then pressing “square” or tapping your desired target. For a quick regroup, a press of “circle” will do the trick. Explore, point, click and multitask the people of your kingdom to expand the reach of your land and maximize funds through daily discoveries.

For example, you can dispatch some of your carpenters to erect a set of stairs that lead to a mysterious hole, which your farmers can dig into. Meanwhile, your soldiers and hunters are best hovering around the king to hold off any mischievous demons. Even though your subjects are doing most of the work, you can join in by swinging your sword with the “X” button. New Little King’s Story takes a real-time strategy approach inspired by the Pikmin series yet blazes its own trail by focusing on the large variety of tasks and jobs instead of the sheer volume of followers.

Intuitive and enjoyable as it is, there are some issues when interacting with NPCs and environments. As your kingdom flourishes, the citizen count increases, and when trying to recruit specific people from a mob, it gets messy — most times you’ll end up picking somebody you don’t want. This wouldn’t be a problem if you had more control over your lineup. Pressing “triangle” does a quick roll call to cycle through your followers’ job classes, but it would’ve been nice to point and dismiss a member as easily as you recruited them.

Also, you’ll need to press “X” to pick up items or talk to townspeople, which is the same button for a sword swing, and detection problems become apparent when your king is waving his saber in the faces of gentle folk and vegetables like a total dillhole. These inaccuracies in the responsiveness and detection departments aren’t heavily detracting to the game as much as they are simple nuisances.

The Vita has more than proven its graphical prowess during its first year in the portable arena, and unfortunately one of the freshest titles to arrive on Sony’s handheld doesn’t do much to rock your eyeballs. New Little King’s Story has a traditional JRPG “chibi” look, which undoubtedly has universal appeal — the game is pretty damn cute and carefree. However, the textures, models and environments sure could’ve used a little more gloss and polish.

I’d be more forgiving of this if the game didn’t suffer from severe frame rate drops and slowdown as you progress. At the start you’ll have the ability to have five followers roam with you, and all is well in the open grassy land. When my guard count hit 12 and the kingdom was rife with new buildings and townsfolk, however, the game got sluggish to the point that it affected the gameplay. It’s also worth noting that menu and dialogue text is quite tiny; an option to increase them would’ve been greatly appreciated.

Following up from the sleeper Wii title Little King’s Story, this new tale continues as King Corobo rules his kingdom with undeniable charm, winning universal acclaim from his subjects as they can’t help but follow his lead. It’s not because he’s a particularly amazing person — in fact, it’s due to his magical crown that seemingly gives him a million charisma points. Apparently, that appeal doesn’t work on a gang of Onii demons led by “The Nightmare,” who oust the king and his people from their castle, forcing them to build a new kingdom from scratch and thus beginning your adventure.

This game has high potential to become your next handheld addiction, blending RTS and life simulation into a relatively easy-to-play package. Each virtual day opens with new opportunities for bigger exploration as your party grows in numbers and skills. There’s a huge inventory of equipment, items and weapons that you’ll find and build for your helpers that not only add stat perks but also extra charm in their appearance. Successfully managing your royal guard to topple enemies and bosses is highly satisfying, and eventually you’ll also rescue princesses who join your party as you press on in an effort to restore your original kingdom to its former glory.

You can also dispatch parties on automated quests that can last several real-time hours before they return with brand new items. It’s a neat feature to manage before shutting down your game session, as when you fire it up the next day, you’ll have new goodies waiting for you. Pairing up with other players online for these virtual quests can speed up the process — it’s a nice addition, but unfortunately the interaction is limited to a menu screen and doesn’t offer a true co-op experience. If waiting isn’t your thing and you have some spare funds in your PlayStation wallet, you can also purchase goods with your real money.

I only wish New Little’s King’s Story could rise to its full potential as multitasking is a bit space prohibitive and sometimes your followers can be pretty dense. For example, if you set a few of your farmers to dig at a hole, it’s not a good idea to wander too far. They’ll either give up mid-way to follow you, or when you return the hole will appear untouched. Or, let’s say you go up a few sets of stairs to get to a plateau to a certain goal or task. Then your necessary worker falls off the edge and doesn’t have the good sense to go around and find their way back up again without you having to retrace your steps. As your numbers grow, it seems like there are some wasted opportunities for you to get several jobs done at once due to these flaws.

In the end, New Little King’s Story is a dangerously addictive game for those with superiority complexes and the thirst to rule them all (that’s pretty much everybody). Some design flaws and little nitpicks hold it back, but this is still a good entry in the Vita’s library.

By Jess Castro
This entry was posted on Sunday, October 14th, 2012 at 12:10 pm and is filed under Jess Castro, Video Game Reviews. You can follow any responses to this entry through the RSS 2.0 feed. Responses are currently closed, but you can trackback from your own site.